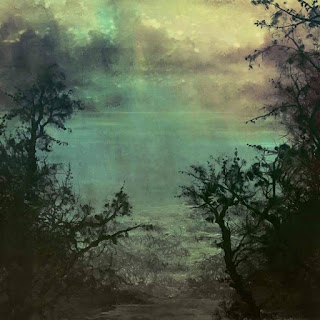 For the longest time, I resisted splits.  The reason, I think, is that I wanted more music from bands, not less, and splits inherently feature less music from each band than an LP or (usually) an EP would.  "But Durf," you're saying, "Even though you get less music from each band, you're getting music from two bands! And besides, isn't something better than nothing?" Reader, I hear you, and I never said it was a good reason.  Like many things in my life, it could be explained by the fact that I am, quite frankly, an idiot a lot of the time.  But that is the past, because I have come around on splits.  It started two years ago with the incredible Chrch/Fister split, then continued on last year with Eye of Solitude/Marche Funébre release.  I actually purchased two Panopticon splits, one with Falls of Rauros, the other with Waldgeflüster.  They're good!  Great, even.  Basically everything I thought about splits was incorrect, and I am now more than willing to give them a listen, especially when they feature two bands that get me all tingly.  Such is the case with the new split between Coltsblood and Un.

Coltsblood opens things up with "Snows of the Winter Realm."  Coltsblood is a UK band from Liverpool, and it is to my enormous regret that I hadn't really thought about them in awhile.  Their 2014 LP Into the Unfathomable Abyss was a great slab of sludge, and I remember listening to it regularly, but then I lost them in the ever-growing mass of bands and music and life responsibilities, to the point where I completely missed their 2017 album Ascending Into Shimmering Darkness and thought this was their first new release in five years.  I'll have to rectify that mistake.  "Snows of the Winter Realm" begins as an ethereal melody, moving so glacially as to almost not be moving at all. The vocals enter, and the melody builds a little, but for awhile "Snows..." is very much a funeral doom song, and a good one.  Little by little it builds, until it transitions from a glacier to an avalanche, suddenly violent and destructive, steamrolling everything in its path.  Over the course of its twenty-one minute runtime, Coltsblood keep the song interesting, consistently evoking emotions and atmospheres while shifting the sonic plates like an earthquake.  Even as the song nears the fifteen minute mark and seems to move into a more melodic, easy-going denouement, there's still that feeling of something bubbling below the surface, ready to shake things up again... and sure enough, another burst of sludgy, distorted riffs erupt to disturb the relative tranquility.  Vocalist and bassist John McNulty never really moves out of a growl, but it's a varied growl, more than adept at filling whatever musical space the band creates, while drummer Jay Plested manages to keep the drums interesting and vital, which isn't always easy on these kind of tracks.  The standout of "Snows..." is without a doubt guitarist Jemma McNulty, whose crushing riffs and airy melodies segue in and out of each other with ease and aplomb, creating the template for the mood of the entire song.  I know I have an album to catch up on, but "Snows of the Winter Realm" truly feels like Coltsblood firing on all cylinders, and it's great to have them back in my musical life.

The self-described "aetherical doom" band Un seems to require no introduction these days; even if I did sleep on last year's incredible Sentiment, I eventually realized my folly and got around to listening to it (it's really, really great).  "Every Fear Illuminated" is their contribution to this split, and if you dug Sentiment, I feel confident in saying you'll love this.  Funeral doom can be tricky to pull off, but Un makes it feel vital and invigorating, every note and riff steeped in atmosphere and drenched in catharsis.  Entrancing, hypnotic melodies from guitarists David Wright and Monty Mccleery dance throughout the song, while the drums from Alex crash like waves against a rocky coastline.  "Every Fear Illuminated," like "Snows of the Winter Realms" before it, eclipses the twenty minute mark, and just like Coltsblood's track, it doesn't overstay its welcome, as it continually varies tempo, musical styles, and pacing in pursuit of its goal.  My favorite parts of "Every Fear Illuminated" are when Un pulls it back, reveling more in atmosphere and melody than crushing riffs; the howling wind and rain versus the thunder in a thunderstorm, if you will.  That said, it's hard to appreciate the natural beauty and power of a thunderstorm without the thunder, and the moments of heaviness in "Every Fear Illuminated" help make the more ethereal moments, and Un itself, all the more sublime.

While I'm certainly open to splits of all shapes and sizes, I do have to admit that splits like this one from Coltsblood and Un, with each band contributing a single, lengthy tune, are really what get my blood going.  But I'm on record as being a fan of long songs, so maybe that shouldn't really be a surprise.  This split is a tremendous way to kick off 2019, as Un continues to make waves and ensure people know who they are, and Coltsblood reminds me that they're a band that continues to release absolutely top-notch material.  This is an early contender for split of the year, and I eagerly await more music from both of these incredibly talented bands.

-Durf
Posted by Brutalitopia at 9:46 AM