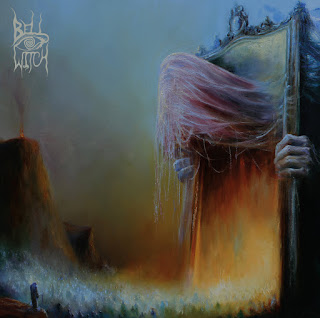 Since the release of their self-titled demo in 2011, Seattle's Bell Witch has become one of the most talked about doom metal bands in the game.  Conceived as a bass and drum duo, Dylan Desmond and Adrian Guerra made their two instruments sound inconceivably large, crafting long, dynamic, intensely heavy doom tracks across their demo and a pair of LPs.  After 2015's Four Phantoms, Guerra left the band, with Jesse Shreibman taking over on drums.  As the new duo was beginning the writing process for their first album together, Guerra tragically passed away, which impacted the album in a profound way.  When such a devastating, monumentally personal event is intertwined with a record, it can become hard, even impossible, to extricate the two from one another.  On October 20, Bell Witch returns with Mirror Reaper, the composition of which, the band says, "sought to match the complexity and weight of these events."

Of all the metal genres and sub-genres, doom is the one I most associate with a feeling, rather than a sound.  To paraphrase former Associate Justice of the Supreme Court Potter Stewart, I know it when I hear it.  Doom should feel introspective, there should be space within the music to be enveloped by an atmosphere of cold and isolation, it should feel like the last few days of autumn, when the skies are a constant opaline grey, and the last withered leaves cling to the trees.  Bell Witch has always excelled at creating these feelings in their music, and Mirror Reaper ups the ante in a big, big way.  Mirror Reaper, you may have heard, is an album made up of a single, massive, eighty-three minute long track, and Desmond, Shreibman, and guest vocalist Erik Moggridge use up every second of that runtime at their own pace, which is often glacially slow.  Yet they imbue each second with such feeling and power that Mirror Reaper becomes incredibly easy to get sucked in to.

Over the entirety of Mirror Reaper, Bell Witch moves from eerily quiet to earth-shakingly loud, never overstaying its welcome in any one sonic locale.  Desmond and Moggridge's vocals compliment the music perfectly, hushed whispers and ragged, pained howls cascading over drawn out bass notes or crashing cymbals or a well-executed organ (seriously: the organ is an absolutely perfect touch).  Unlike albums where you can point to a riff, or a fill, or a vocal passage to point out and compliment the prodigious skill of the band/member, what's most stunning about Mirror Reaper is the entire, finished work, the way every passage and beat comes together to create an album that is cinematic in its scope and effect.

Bell Witch's 2012 debut LP Longing remains one of my favorite doom albums ever, a monstrous concoction of roaring vocals, cathartic introspection, and one hell of a Masque of the Red Death sample.  Four Phantoms expanded their sound, and was adored as one of the best albums in its genre that year.  Mirror Reaper tops them both.  While certainly a more difficult listen, due to its mammoth runtime, Bell Witch have created an album absolutely worth an hour and a half (almost) of your time.  The patience of the album, the way it takes its time crafting an atmosphere of cold melancholy with quiet organ passages and haunting vocals, is truly a feat to behold.  When the stunning album artwork by Mariusz Lewandowski was revealed, I expressed my hope that if Bell Witch could make an album half as good as Lewandowski's cover, then we'd be in for a real treat.  Needless to say, Bell Witch exceeded my expectations, and both the artwork and the music of Mirror Reaper stand as highlights not only of doom, or metal, but of music in general.  With Mirror Reaper, Bell Witch has written an instant classic that will only continue to grow in stature and reverence as time passes.