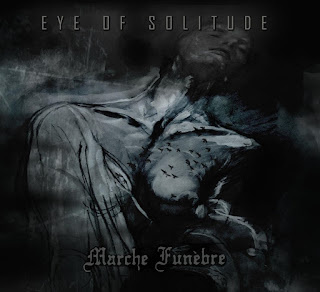 I used to not be too big on splits.  I think that 's because I thought I wasn't getting enough music; usually a track or two from each band adds up to around 20 minutes, and I tend to want more, because I am a greedy American.  Lately though, I've been coming around, helped by some longer splits; there was the fantastic CHRCH/Fister split from last year, in addition to this year's Mammoth Weed Wizard Bastard/Slomatics release Totems.  Giving splits - or at least doomy splits - a chance was beginning to pay off!  So obviously when the new split from Eye of Solitude and Marche Funébre hit the ol' Töp inbox, I was going to check it out.

I can only assume that Marche Funébre won the toss and deferred, because Eye of Solitude begins the split with "Collapse."  The ambient opening to the track allowed me time to think back on my favorite Eye of Solitude album, Canto III, which was also my introduction to the band and absolutely floored me.  My funeral doom experience to that point was essentially Ahab and a few Swallow the Sun tracks; Canto III made me see things in a whole new way.  The band's 2016 album Cenotaph was similarly fantastic, and Eye of Solitude was, since I had no prior exposure to Marche Funébre, the reason I checked this split out.  Meanwhile, the ambient opening with occasional vocal wails is still happening; now it's clocked almost a third of the "Collapse" runtime.  I'm a fan of elongated doom, but I feel like if they cut that opening segment in half, the track itself wouldn't suffer, primarily because what comes next is so delightful.

Vocalist Daniel Neagoe has one of the biggest, strongest vocal ranges I've ever heard, and while his pained wails are cathartic, his deep, rumbling growls are absolutely devastating and magnetic.  When the music kicks in and Neagoe is bellowing on top of it is when Eye of Solitude is at their apex.  Steffan Gough and Mark Antoniades provide fantastic guitars, moving from driving riffs to intricate solos, creating memorable melodies that weave in and out of the crash of Neagoe's vocals, while the rhythm section of bassist Chris Davies and new drummer Remco Verhees provide a solid backbone to the band's addition to the split.  "Collapse" takes its time, like all good doom metal, and provides both heavy, pounding sections alongside quieter, more poignant passages.  Eye of Solitude are masters at this dynamic, yet "Collapse" left me feeling slightly underwhelmed, especially considering how excited I was to hear it.  Please don't get me wrong; it's an absolute beast of a track, and one I've gone back to since I heard it before, but ultimately, it seems the atmosphere, ambiance, and sense of space that Eye of Solitude utilized so well on Canto III and Cenotaph just doesn't work as well on one long song.

I had never listened to Marche Funébre before hearing "Darkness," but holy fuck do I have some listening to do. The first thing that jumped out at me on "Darkness" were the incredible clean vocals from Arne Vandenhoeck, which absolutely soar over the desolate landscape of the music.  The next thing that jumped at me was the incredible, hypnotic, can't-get-out-of-your-head guitar melodies from guitarists Peter Egberghs and Kurt Blommé.  I've listened to a lot of doom metal in my day, and while a whole lot of it is memorable, very little of it has been catchy in the way that "Darkness" is.  Underneath these catchy melodies, bassist Boris Iolis makes his grooves dance, and drummer Dennis Lefebvre is absolutely outstanding; moving away from the standard "set the pace" drumming of far too many doom bands and completely shining in his breakdowns and energy.  Energy is a big part of "Darkness," which manages to be fun and engrossing for the entirety of its fourteen minute runtime.  Ultimately it feels like the band is pouring its all into every second, and when Vandenhoeck and Egberghs' vocals combine above the insane riffs and grooves provided, it sounds transcendent, like nothing I've ever heard in doom metal, and I want everyone I know to hear it.

Praise is obviously subjective; my seemingly underwhelmed response to Eye of Solitude's "Collapse" wouldn't be so if I hadn't been blown away by the band's Canto III, and there's a chance that my completely smitten response to Marche Funébre's "Darkness" wouldn't be what it was if I had heard any of their previous material.  But in a way, that's life.  The split between these two bands contain two long tracks, both of which are very, very good.  One of them just resonated with me more than the other; perhaps when you listen, it will be the other way around.  Either way, the fact remains that Eye of Solitude and Marche Funébre have put out an incredible split that should be heard.

The split is out February 22 via Hypnotic Dirge/Cimmerian Shades Recording.