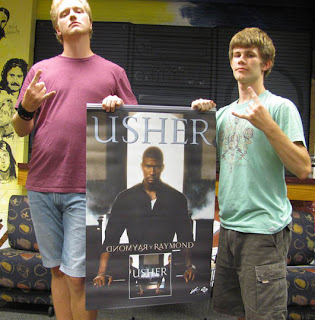 Yeah, thats about how metal it got for Jack and I this year.
﻿Don't worry everybody.  The picture above is no indication of how metal the year was.  I just wanted to throw this picture up for the hell of it.  Quite to the contrary, this year saw the release of numerous albums that were receiving consideration from me to make this list.  And because of that, it was extremely difficult to finalize this list.  There were some I didn't get a chance to listen to as much as I would've liked but hey, that's just the nature of the game.  Overall, 2010 was a fine year for metal.  More specifically, it was a big showing for black metal and older well established bands still proving they got what it takes.  So enough chatter, here's my list. 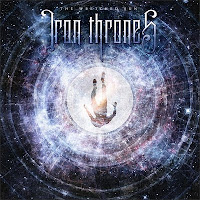 10. Iron Thrones – The Wretched Sun
This is the breakout album for Minneapolis’ Iron Thrones.  Oh and did I mention that they aren’t signed onto a record label yet?!  It’s true.  This record was a completely independent project. I honestly would have never guessed that because the quality is utterly amazing.  But now let’s get to the actual music itself.  The best way I can describe this album is that it is really a breath of fresh air.  When I first listened to this album I could sense there was something different about it.  I couldn’t put my finger on it at first, but then I realized that it all comes down to the fact that these guys don’t force anything with their music.  They just let it flow, and from there the songs guide themselves.  Both clean and heavy driving guitar sections mixed with raw aggression in the vocals department, and let’s not forget some very old school Thrice type riffs(+1), gives us an album that begs for a listen.
Favorite Tracks: Like A Moth To Flame, Against The Grain

For an album that possesses a doom and gloom type metal sound, this album grabs your attention and keeps hold of it for its whole duration.  Of course, you had to trust that Tom G. knew what he was doing with this project’s debut release.  There was something very entrancing about the sound of this record.  It has a very other worldly type of vibe which is just straight up badass.  For instance, you’ll have one of those slow eerie type of riffs that’ll lead you to believe that all hell is going to be unleashed upon your ears at any given moment.  And trust me, it does.  These hellish build ups don’t happen sporadically since they gradually build up from smaller intervals of lower key creepy sections into some totally evil and heavy sounding riffage.  In other words, the pacing of this album is very solid and is what ultimately keeps your attention and makes Triptykon’s debut nothing short of a success.
Favorite Tracks: In Shrouds Decayed, A Thousand Lies

8. As I Lay Dying – The Powerless Rise

Ever since I started listening to As I Lay Dying with their 2003 album, Frail Words Collapse, I’ve always ended up asking myself, “Well how the hell are they going to be able to outdo that album?!”  The case is no different this year with their May release of The Powerless Rise.  I thought they had reached their peak with An Ocean Between Us, but I’m very glad that they proved me wrong.  Naysayers will call it another Christian metalcore album but I’m going to call it As I Lay Dying’s best and definitely heaviest album to date.  Adam D’s assistance to the band as their producer over the course of the past two albums has really helped them tap into their true potential.  Everything you’ve come to love about As I Lay Dying is here.  Brutal blasting drum beats, the Lambesis growl, and heavier than hell breakdowns.  And even though you may have come to expect that from these guys, they do it in such a way on The Powerless Rise that still seems new, inventive, and in many ways refined.  As I Lay Dying continues to prove that they are a force to be reckoned with.  Take notice, folks.
Favorite Tracks: Anodyne Sea, Parallels, Condemned

This was one of a couple albums that took me by surprise this year.  I knew it would be at least good, but never would I imagine the trip this album would take me on.  Listening to this album is a very surreal experience due to the fact that I instinctively had two opposite reactions.  On one end of the spectrum, the more soft/clean parts of the album are so beautiful in many respects that it made me zone out and reflect on my life.  But on the other end of the spectrum, even though I felt zoned out and that the music was flying by without being fully aware of it, I also felt fully engaged with the music the whole time extremely attentive about listening to it.  The Ocean has always done a good job at creating an atmosphere within their music that is very hard to describe in words.  You can only understand what I mean if you listen to it.  And trust me, it’s worth it.
Favorite Tracks: She Was The Universe, The Almightiness Contradiction

6. Kvelertak – Kvelertak
So if you came up to me and said, “Hey check out these guys.  They’re like sludgy hardcore punk metal.”  I’ll be honest.  I wouldn’t be too interested in that.  But now if you come back at me and say “well this band’s name literally translates to stranglehold in Norwegian.  And, in addition, their album artwork has a frickin green owl with flowers on its head and tentacles that are caressing two chicks.”    Ok now you have my attention.  In enters Kvelertak and their self titled debut.  Never have I enjoyed metal with such a blatant punk influence before.   Halfway through the album, I felt like I was listening to the Ramones.  But yet, it felt so right.  It was a most unexpected feeling to say the least.  It’s nice to hear something like this amongst the plethora of black/doom metal that came out this year.  If you want to headbang/rock out to some genuinely fun music, plug in Kvelertak.             Favorite Tracks: Blodtorst, Fossegrim
5. The Sword – Warp Riders

Warp Riders is the perfect package for The Sword.  With obvious old school influences such as Led Zeppelin and Black Sabbath, The Sword have returned with a sound that remains true to their trademark sound but also has improved over their two previous releases by leaps and bounds.  In addition, that improved and tightened up sound arrives within the context of a concept album that involves a dude named Ereth who has to save his planet with the aid of a mystical orb and a being known as the Choromomancer.  Yeah everybody, you can definitely count me as on board with this one.  The really awesome thing about this album, though, is that while every song fits into the larger story of the album, you could listen to any track individually and still enjoy it just as much.  Crafting catchy songs that still fit the over-arching story of the album is no easy task.  Now hear me out.  This album didn’t redefine any boundaries of a genre or anything quite like that.  It is, however, a perfect example of a band’s true potential coming to fruition.
Favorite Tracks: Tres Brujas, Lawless Lands, The Warp Riders
4. Deftones – Diamond Eyes

Chalk up another point on the board for Deftones, they made another great album.  Wow, imagine that.  While this year was swamped with a whole lot of black metal, it was also a year that was marked by many older well established bands that returned to show they still have their edge.  Diamond Eyes would fall under that category.  Chino and the boys return with lower tuned guitars and Meshuggah-esque riffing that is unbelievable.  One thing I’ve always respected about Deftones is that they never screw around in their music.  They get right to the point and bring it full force.  Diamond Eyes will, without question, make this clear.  There’s not much more I can say here.  This is just a great album from a band that has always been consistently great.
Favorite Tracks: Diamond Eyes, Royal, Sextape

This one takes the cake with me for breakout album of the year.  If you listen to Intronaut’s previous work and then compare it to Valley Of Smoke, your jaw will most likely drop just like mine did.  The growth and cultivation of their sound is what makes this album so impressive.  Being their progressive breakout, this album seamlessly combines relentless grungy riffs with many extremely chill sections.  On that note, I would definitely recommend this album to any stoners out there (I mean cmon guys the album is entitled Valley Of Smoke after all).  All in all, Intronaut nailed this one to the T.
Favorite Tracks: Elegy, Valley Of Smoke

2. Agalloch – Marrow Of The Spirit

I’ve always had an ongoing joke with some of my close friends that Opeth’s music is what I refer to as “haunted house” type music due to the very eerie/spooky type of emotions it always seems to invoke.  Agalloch’s Marrow Of The Spirit, however, has now taken that to a whole other level that I never could have imagined was possible.  Eerie and spooky does not begin to describe this album.  And never, in recent memory, has album artwork been so powerful in depicting vividly the so called “setting” of an album.  I honestly did feel like I was in the middle of the goddamn wilderness isolated from everything while listening to this.  I mean this, though, in the most positive of manners.  And anybody who thinks this album dragged on too long should just stop with that utter nonsense.  That’s essentially the equivalent of saying, “Excuse me.  I would like less Agalloch please.”  That garbage doesn’t fly around here.
Favorite Tracks: Into The Painted Grey, Ghosts Of The Midwinter Fires

I have to give a quick shoutout to Quigs at TheNumberOfTheBlog who not all too long ago compiled a list of the top 50 male metal vocalists.  Ranking in at #32 was The Dillinger Escape Plan’s very own Greg Puciato.  Quigs proceeded to hit the nail on the head: “That guy can fucking sing.”  Truer words have probably never been spoken as there’s a certain presence that The Dillinger Escape Plan has that is unmatched.  It would be no surprise to anyone that this album would be good, but it’s also safe to say that Option Paralysis is far beyond just good.  As is typical with these guys, you never quite know what to expect.  From your usual math-core insanity to pretty little piano lines, this album (also nicknamed “Option Eargasm” and “Orgasmic Paralysis” by Jack and myself) brings plenty of twists and turns that create an overall listening experience that I feel was not matched in 2010.
Favorite Tracks: Farewell Mona Lisa, Gold Teeth On A Bum, Widower

Looking Most Forward to in 2011:  The Human Abstract, TRIVIUM, Protest The Hero, Darkest Hour, Scale The Summit
-Mick
Posted by Brutalitopia at 2:50 PM