A couple of weeks ago, I was minding my own business, doing nothing in particular, when I stumbled across this.  I was intrigued, and then confused, because it all seemed so familiar, and yet so different.  I feel like there's already a pretty definitive blog dedicated to workouts and metal, I just can't quite remember where.  Maybe I should ask Decibel about it; they clearly found this other, superior blog post and then tweaked the idea to fit their needs...

Jokes aside, I think Decibel doing their "Health Awaits" column is awesome.  This past year has been rough on pretty much everyone, especially at the beginning.  It can be a lot easier - and a lot more tempting - to cope with stress and anxiety with bad habits than good, and I know when COVID started, I was definitely leaning into bad habits.  So I think sharing interviews about good habits is definitely something that could help a lot of people right now.  Also because I'm a nerd, I get a kick out of reading about other people's workouts and fitness routines, and then blatantly stealing whatever aspects seems like they would work for me.  I may go into more detail in another post, but the past month or so has seen me fighting off another pretty intense Crohn's flare, so in addition to tinkering with and adjusting my workouts, I'm also constantly monitoring and working on my diet.  It can feel like an additional full-time job at times, so any information I can acquire is money; if it happens to be metal-adjacent, so much the better.  Really, the only issue I have with "Health Awaits" is the name.  I get the obvious pun, I just think they can do better.  Like so:

Ok, some of those are way better than others, so maybe I was too judgy on "Health Awaits."  Regardless, kudos to Decibel for an excellent start to what I hope will be a frequent column.  So far there's only the one column out, so I'm not sure if it's going to be a monthly thing or what, but I'm definitely going to keep checking it out, if only to collect evidence to send to my attorney for my inevitably unsuccessful attempt at getting creative royalties. 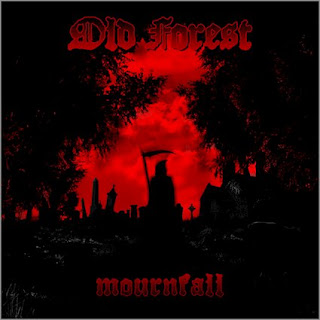 The week started off with another band I was previously unfamiliar with, Old Forest.  The PR email we got described the band as "developing their own individual mix of early 90s style Black Metal with epic Doom riffs," which yeah, please, sign me up.  Mournfall is the band's sixth album and first since 2019, and if those other albums are anything like Mournfall, then I have yet another discography to catch up on.  There are blast beats, there are soaring, passionate riffs, and there is an absolute overabundance of melancholy, which may have resulted in more passive sitting and staring than actual, you know, lifting this morning, but whatever.  It was a workout for my soul.  Mournfall is out TODAY on Death to Music Productions. 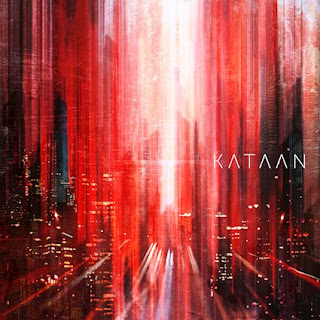 The OG Durfling is going through some "toddler sleep regression," which is the clinical way of saying he randomly wakes up and starts screaming in the middle of the night.  On this day, "the middle of the night" was right as I was heading out the door to workout, so I turned around, went upstairs, and calmed him down.  Which took quite a bit longer than I would have liked, so in lieu of my regular workout, I just threw up a half hour HIIT routine that turned out to be just perfect.  To fit a shorter workout, I went looking for an EP, and stumbled out of the inbox with the debut from Kataan.  Their self-titled EP is a blend of dissonant and melodic death metals, perhaps not unlike what In Flames would sound like if they had tried to sound like Ulcerate after Reroute to Remain instead of whatever they did instead.  It's a quick, breezy EP that definitely leaves you wanting more, which ain't a bad thing for a four track debut.  Kataan is out May 7th, and hopefully a full-length will follow sometime soon. 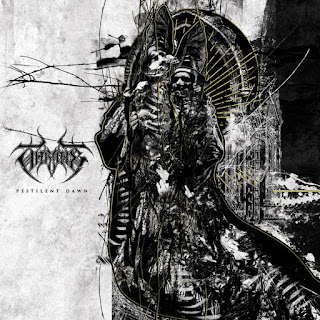 This was one of those albums that just kept popping up while scrolling through Bandcamp until finally I couldn't ignore it any longer.  Throne practice a particularly ripping form of blackened death metal that fits in real well for a workout, although a funny thing happened while listening to Pestilent Dawn.  The album's fifth track, "Eternity in Mourning," is a sub-two minute acoustic instrumental, and unlike a lot of other "soft" breaks in death metal albums, I really, really dug it.  So much so that it's easily the melody I find myself humming most from Pestilent Dawn, and I don't say that to take away from any of the album's other tremendous tracks ("All Creation Wept" is my favorite heavy track).  So then I got to thinking about what if elements from "Eternity in Mourning" were in the same song as the heavier elements from "All Creation Wept," and how cool that would be, and then I realized I was thinking about progressive death metal or atmospheric black metal, and how those things already exist, so if Throne wanted to do that, they probably would have.  Having kids fucks up your thought patterns, man.  Don't let my rambling deter you; the excellent Pestilent Dawn is out now, and you should check it out.

Unendlich - Paradox of a Broken World 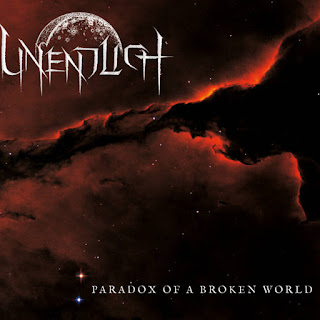 I'm not sure what it is about black metal that attracts the one-man band approach, but I can't think of any other genre where the practice is so prolific.  On one hand, it's inarguably cool to see and hear one person create a complete album, and I am absolutely in awe of anyone with the ability to play multiple instruments.  On the other, complete creative control can be a double-edged sword; look at this blog for instance.  I clearly need an editor and should not be left to my own devices like this.  It can be extremely tempting to follow every impulse you have to what you feel is the logical end, and that makes the writing suffer.  Uh, music.  What was I talking about?  Anyway, Unendlich is the one-man project of Michael Connors, and it does not suffer from creative bloat.  Paradox of a Broken World is a sleek, rapid-fire black metal assault that comes in hard and fast and lays aural waste to all in its path.  The album's longest track is just shy of six minutes, but for the most part these are four minute black metal bangers that waste absolutely nothing in terms of time spent pulverizing your skull.  This is Unendlich's fourth album since 2010, and I feel pretty certain the bandwagon is gonna be all out of room once it hits.  Paradox of a Broken World will be self-released on July 9th. 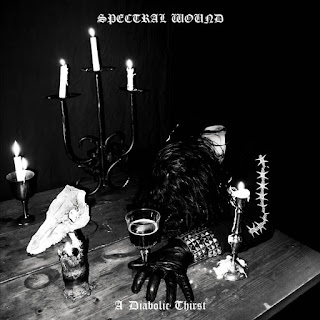 Outside of promos, Bandcamp, and other metal blogs, my main source of finding new music is Instagram, where I follow labels who will put up pictures of test pressings and upcoming releases.  That's where I first heard about Spectral Wound, more specifically their new album A Diabolic Thirst.  Of course because I'm me, I didn't think anything of it at first and was content to just sort of let that information float along in the back of my mind, doing nothing but taking up space.  And then, also because I'm me, that knowledge forced its way to the forefront of my skull and became an obsession, to the point where falling asleep last night I was anticipating listening to this album during my workout.  It not only did not disappoint; it exceeded my wildest expectations.  A Diabolic Thirst is one of the best black metal albums of the year, incorporating atmosphere and melody without losing any bite, and pummeling along with vicious riffs and hair-curling shrieks without sounding like it was recorded in a toilet.  Spectral Wound has made an album that paints its canvas with all of the color palate that black metal has to offer, and in doing so has created an exceptional, vibrant landscape to dive into.  Fans of all different sub-genres of black metal will find something to love on A Diabolic Thirst, and new fans who want to see what the genre is all about will get an incredibly astute primer.  A Diabolic Thirst came out last Friday, and you should probably listen to it, given that I guarantee you're going to be hearing about it at the end of the year.

Pretty solid week, if I do say so myself.  Feels like the music is getting better and better as we get further into 2021, which is always appreciated.  Past Durf's Weekly Workout Albums out today are:
And that's it!  Hope everyone had a great week this week and has a great week until next time.
- Durf
Posted by Brutalitopia at 9:30 AM