It's April, which means baseball is back!  This is two-thirds a big deal for us at Brutalitopia, where a full 66.6% of us are huge baseball fans; Tom loves his Mets, I'm a diehard Tigers fan, and Mick is fully content to spend summer waiting for Bears season to start.  I'm always excited to watch as much baseball as possible, something that I'm sure I will not have to change or adjust at all this year despite my overwhelming sense of having absolutely no time for anything whatsoever.  Maybe I can convince work to pay me to stay home and watch baseball instead of, like, building things onsite.  A boy can dream.

In addition to baseball, the arrival of April means that we are inexplicably one quarter of the way through 2021, which seems insane.  I feel like these posts speak for themselves in terms of my stated goals of writing more (I am, pretty much weekly) and listening to more music (102 albums, EPs, and splits as of this writing), and honestly I'm having a lot of fun doing them.  It's a great motivating factor on the mornings where I just don't feel like shuffling out to the garage to throw a bunch of heavy metal around.  But being a quarter of the way through the year, and having baseball back, gives me an idea.  Baseball gives out three awards at the year: Most Valuable Player, Cy Young, and Rookie of the Year.  These awards recognize the best player, the best pitcher, and the best rookie, respectively; it's basically Album of the Year in three categories for ballplayers.  And while these awards are only handed out at the end of the year, that doesn't stop baseball writers from writing posts at the quarterly mark of the season announcing their picks.  You can probably see where this is going by now, and yes, I am going to now tell you my Cy Young Album (Best Metal Album), MVP Album (Best Non-Metal Album), and Rookie of the Year Album (Best Debut) from January-March. 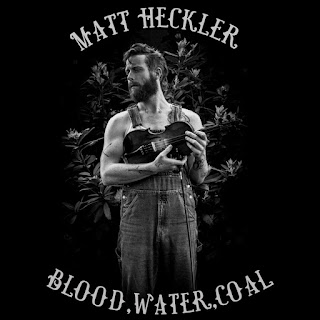 I know what you're probably thinking; if MVP is the award for best player, and Brutalitopia is a metal blog, then why is my fake MVP Award for Best Non-Metal Album.  It's a good question with a simple answer: I'm one of those freaks that would rather watch two great pitchers go against each other in a 1-0 game than watch a 14-10 slugfest with a ton of offense.  So metal will be the Cy Young, because it's my blog post and my rules.  Anway, Blood, Water, Coal is a folk album that features a lot more fiddle than I ever thought I'd find myself enjoying, but it rules so hard.  Heckler's voice is amazing, and the music is cathartic, heart-wrenching, and invigorating all throughout.  If you like Aerial Ruin or Panopticon's The Scars of Man... Pt. II, then I think you'll dig this.

Other Finalists: Mogwai - As the Love Continues, Kings of Leon - When You See Yourself 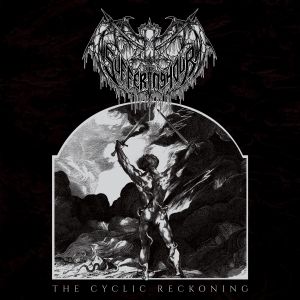 No surprises here, as I've been singing this album's praises since discovering it in the second-ever Durf's Weekly Workout post all the way back in January.  The Cyclic Reckoning continues to amaze me, revealing new subtleties and interesting moments every time I listen (which is basically weekly).  I really, truly never thought I would find myself this engrossed with the whole cosmic death metal fad; I am on the record as describing it as "bands trying to make Catch Thirty-Three as if that perfect album doesn't already exist."  But here I am, hat in hand, happy to be wrong.  Suffering Hour has forced themselves into the upper echelon of metal bands period, and to the top of the cosmic death pyramid. 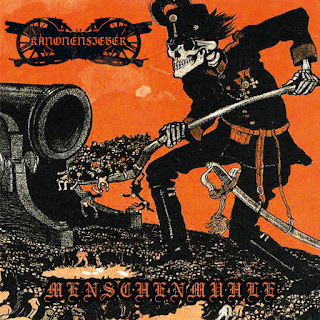 If your album makes people draw comparisons to Bolt Thrower, I'd wager you're doing something right.  Menschenmüle is a pummeling, vicious death metal album that announces itself by kicking in your door and then proceeds to tear your house down over its runtime.  Even the - sparse - moments of melody are applied in such a way as to be maximally impactful and unforgettable.  This is one of those debuts like Pallbearer's Sorrow and Extinction or Deafheaven's Roads to Judah in which a band arrives with a fully formed and fleshed out vision of who they are and what they want to be, and I am incredibly excited to see what direction Kanonenfieber goes over the course of their career, while enjoying the absolute hell out of Menschenmühle in the meantime.

So that was fun!  Be prepared for posts just like this one in early July and October; on to the workouts! 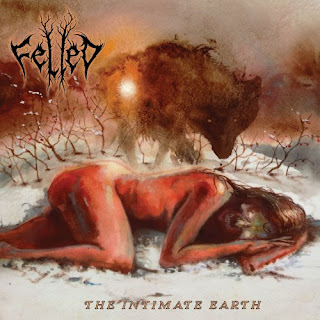 I had to be up at 2am for this workout, but I was actually up at 1am because it sounded like a freight train was roaring past my house.  A cold front was blowing through my neighborhood, and it brought sustained 60 mph winds, along with gusts upwards of 70.  It was super loud, and when I got to work it was a mess to clean up.  I bring this up because I was hit with an overwhelming sense of irony that I was listening to a band called Felled while wondering if the sunrise was going to reveal a yard full of felled trees (thankfully, la Casa de Durf suffered no damages).  Felled makes folky black metal that incorporates a lot of violins and violas, and your reaction to the first half of this sentence will tell you everything you need to know about whether The Intimate Earth is for you or not.  I like it, as I can absolutely appreciate a mournful feel to my black metal, but the album standout is undoubtedly the opening riff to "Fire Season on the Outer Rim," which just absolutely slaps.  The Intimate Earth is out July 2nd on Transcending Obscurity. 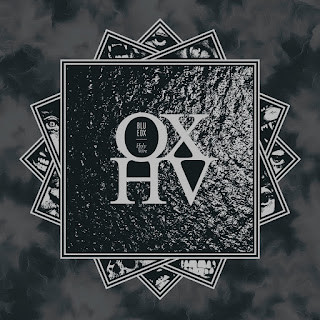 I've been playing around with different "burn outs" at the end of each workout, just to get a little extra out of my mornings and ensure I'm leaving everything in the garage.  Usually this consists of doing five sets of however many pushups or burpees or arm curls as I can; the rest of my workouts are pretty regimented, so I'm trying to be loose with this.  It's only been a week or two, but it definitely seems to give me a little more feeling of a burn coming out of a workout, so I'll probably stick with it.  Anyway, Holy Vore is a sweet little chunk of sludgy hardcore that I remember being distinctly upset upon its ending.  I know you should always leave them wanting more, but man I wish there were just like 20% more of this album.  Guess I'll take what I can get.  Holy Vore is out now. 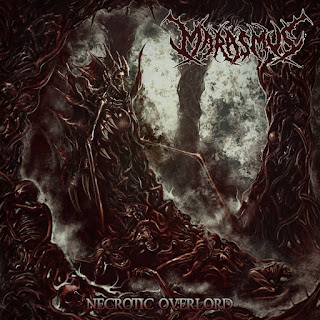 I owe Marasmus a HUGE apology.  When I'm at work, a lot of times I'll use voice to text through my Apple Watch instead of pulling out my phone to bang out a text.  So I was trying to tell a friend about the rather excellent blackened death metal found on Necrotic Overload when my nasally Midwestern dialect struck with a vengeance, causing my watch to text about the crazy new album from "More ass miss."  And listen, I'm just not sure how to stop thinking about that, because it is objectively hilarious.  And now I've told YOU about it, and now instead of us all talking about how much of an absolute banger "Voices of the Wailing Deceased" is, we're just talking about that more ass band.  I'm so, so sorry.  Necrotic Overload came out March 26th, also on Transcending Obscurity, who is just killing it with releases this year.

Necropanther - In Depths We Sleep 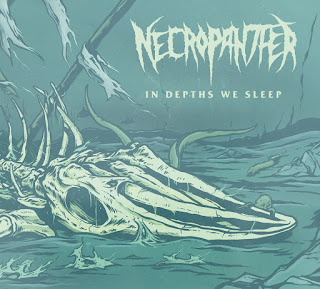 In Depths We Sleep is the first Necropanther album I've listened to, and some cursory reading indicates that it may not be indicative of the band's actual sound.  Apparently between full albums, the band has one member write an EP, which the band then records.  Which is fucking awesome, and I wish every band did this.  I don't even care how any of these albums sound, that's just such a cool idea.  In Depths We Sleep does sound great though, a nautically-themed composition of sludgy riffs and lightly proggy ideas that brings to mind Leviathan-era Mastodon for obvious (and maybe a little lazy, on my part) reasons.  The only gripe I have is that I could use way more than sixteen minutes of music that sounds this good.  In Depths We Sleep was released March 12th.

Bones of the Earth - II. Eternal Meditations on a Deathless Crown 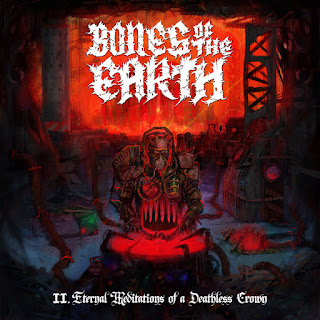 So I almost skipped this album, because the title starts with the number II and the press release said it was the continuation of a concept album, and for like two seconds I was worried I would be really lost.  Then I remembered that I've literally never been able to follow a concept album's story without reading the lyrics at least a dozen times, so I threw II. Eternal Meditations of a Deathless Crown on and gave it a go.  Holy cow what a good choice!  Bones of the Earth somehow combines the epic majesty of doom with the searing intensity of hardcore without losing any of the former's forlorn grandeur or the latter's blistering immediacy.  I'll be honest, even though I was intrigued by the description, when I read that "doom/hardcore" mix part, I was absolutely the Jennifer Lawrence "Yeah, ok, thumbs up" gif.  But then I listened to it and I was instantly transformed into the Jennifer Lawrence "spit take" gif, because Bones of the Earth crushes it, and II. Eternal Meditations of a Deathless Crown is one of the year's most pleasant surprises, and now I want to listen to their first album (I. The Imminent Decline of Human Spirit) just because of how good this one is.  II. Eternal Meditations of a Deathless Crown came out last Friday.

And there's the week!  Pretty solid week all around in terms of lifts and music for me, so I certainly hope it was the same for you.  Previous Durf's Weekly Workout Albums out today are:
None.  Well... fuck, what a week to actually remember to do this part.  Have a great week.
- Durf
Posted by Brutalitopia at 9:30 AM