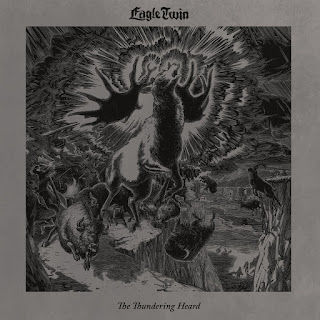 Since their debut full-length The Unkindness of Crows in 2009, Eagle Twin has quietly been one of my favorite bands.  ...Crows was like nothing I had ever heard when it came out; the band's shamanistic take on doom is weird and adventurous in a way that too little music is.  That weirdness was somehow pushed even further on The Feather Tipped the Serpent's Scale, the band's 2012 follow up, resulting in an album that still rewards listens with the discovery of something new.  Now, six years later, Eagle Twin has returned with The Thundering Heard (Songs of Hoof and Horn); after such a lengthy slumber, can Eagle Twin muster the same thundering weirdness that made them so hypnotically intoxicating?

"Quanah un Rama" seemingly opens up mid-song, with guitarist/vocalist Gentry Densley already in the throes of his throaty, deep vocals.  The song moves into familiar Eagle Twin territory, with Densley bellowing while delivering crushing riffs and drummer Tyler Smith delivering a searing rhythm on the drums.  Soon enough, however, the song changes moves towards a melody that infects and twists the rest of it.  "Quanah un Rama" has an undeniable groove to it, hypnotic amongst the distorted shrieks of Densley's guitar riffs and wails.  It's an incredibly fun song to get lost in.

"Elk Wolfv Hymn" continues this descent into melodic madness, varying tempos and subverting expectations before coming to a droning (in a good way) close.  "Heavy Hoof" opens with Densley singing with no backing music, before a thunderous crash of distortion hits and all of a sudden there's a jazz-blues backing riff coming through the distortion.  I don't know that Eagle Twin can write a song that I'll like more than "The Storytelling of Ravens" from The Unkindness of Crows, but "Heavy Hoof" comes pretty damned close.  The bluesy backbone of the song remains, but it's covered by layers of distortion, like a fossil buried by time under sediment and dirt.  This salacious groove continues through the end of the track, encapsulating the senses completely like a sandstorm or blizzard.  There's probably a better way to say it, but "Heavy Hoof" fucking owns.  It's so good.  "Antlers of Lightning" brings the album to an appropriately thunderous close, and is just as completely engrossing as the rest of The Thundering Heard. But, if I'm honest, while the last minute works perfectly as an album closer, I do sort of wish "Antlers of Lightning" came before "Heavy Hoof," as the shadow of the latter absolutely looms over at least the first half of "Antlers of Lightning."

The Thundering Heard (Songs of Hoof and Horn) finds Eagle Twin in a state of flux.  The weirdness is still on display, as are their spiritual and naturalistic atmospheres and lyrics.  But the melodies and blues influences are much more pronounced this time around, which makes The Thundering Heard easily the most accessible Eagle Twin album; where the band's first two albums seemed to appeal to doom fans specifically, I can see this one reaching out to a lot more fans.  And that's great, because The Thundering Heard is also the best Eagle Twin album, a multi-faceted tapestry that weaves added melodies into the band's established madness to keep listeners on their toes.  The Thundering Heard is a wild, feral romp with enough layers and different directions that fans of all genres should be able to find at least one thing to love about it.  My hunch is anyone who listens will end up liking pretty much the whole thing.

The Thundering Heard (Songs of Hoof and Horn) is out March 30th via Southern Lord; pre-orders can be found here.