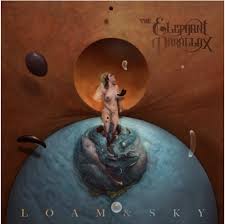 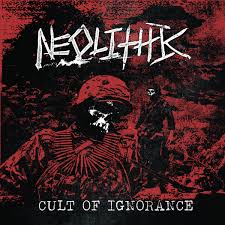 I guess right off the bat it would be good to tell you that there really isn't any through-line between the two releases I'm reviewing today.  Both are EPs, sure, and I had never heard of either band before listening to these two albums, but outside of that, the music contained within these EPs couldn't be more different.  But the Durfette and I just moved from Chicago to Idaho, and I've found myself going back and forth between these two releases while unpacking and building compost bins, so I decided to review them together.  The Elephant Parallax is a progressive trio out of LA, and Loam & Sky is their third release following a demo and EP.  Neolithic is a death metal/hardcore quintet out of Baltimore.  Different coasts, different sounds, similar amazing listening experiences... let's do this shit!

I'll start with The Elephant Parallax. The trio consists of David Renteria on guitars, Stephen Charouhas, and Paul Charouhas on drums; the trio share vocal duties.  Loam & Sky, as mentioned, is the band's third release, and first since 2010.  The band sounds a bit like El Cielo/Catch Without Arms era dredg, while their soaring, clean vocals are slightly reminiscent of Robin Staps of The Ocean.  To keep the comps going, album opener "The Conscious" has an earnestly jazzy sound reminiscent of Introunaut circa Valley of Smoke.  The exquisitely titled "Star Stuff" begins a little slower and less bouncy than "The Conscious," before settling into a wonderfully enjoyable groove.  As good as those tracks are, it's the final two tracks of Loam & Sky that really knock me off my feet.  "OhRei" is a mournful, pleading track with absolutely perfect guitar tone from Renteria.  The repeated wail of "We can change the scene" over the back half of the song absolutely hits me right in the feels, and by the time "OhRei" ends in a distorted fuzz, it's impossible to not feel like something deeply personal and important has been lost.  "Incenfeminalgia" takes the sorrowful feeling from "OhRei" and turns it inward, with dreamy guitar work floating over dancing rhythms creating a sense of pensive musing, before exploding like a collapsing star in the song's final act.  Loam & Sky deftly blends progressive tendencies with pop sensibilities to create an EP that's simultaneously cerebral and catchy, with "Incenfeminalgia" and "OhRei" respectively highlighting those sides splendidly.

In contrast to the low key sunshine of The Elephant Parallax, Neolithic's Cult of Ignorance is a grimy, quick and dirty assault of blistering death metal.  Clocking in at a scant eight minutes over three tracks, Neolithic races out of the gate and doesn't let up.  "Blinded" opens with a bang, with driving guitars and bellowed roars propelling over drummer Jon John Michaud's absolutely pulverizing kit work.  "Cult of Ignorance" is somehow even more aggressive, with guitarists Mitchell Roemer and Dustin Thornton shredding like they're being chased by wolves.  There's a sense of groove that runs through the tracks on Cult of Ignorance; as heavy and brutal as it is, Neolithic have put out three songs that are also deceptively catchy.  "Rapacity" closes the EP exemplifying this groove; the guitars working in tandem to create a riff a statute would headbang to.  Neolithic exemplifies what I think the platonic ideal of crusty death metal ought to be, and it's incredibly impressive that the band is just over a year old.  Cult of Ignorance is clearly just the beginning for these guys, and I expect great things from them going forward.

Two EPs that sound vastly different but that are both more than worth your time, The Elephant Parallax's Loam & Sky and Neolithic's Cult of Ignorance have become my most listened to albums of the year (by far) over the past few days.  I'm really not entirely sure why I've subconsciously paired these two albums, although it may just be as simple as listening to them back to back on repeat for the past few days.  Either way, both of these albums scratch that deep down itch that only the most enjoyable of music can reach, and I think you'll enjoy them.

Posted by Brutalitopia at 10:23 AM