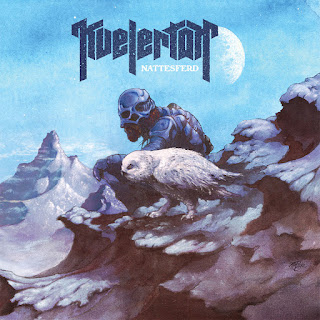 Kvelertak have made quite the name for themselves since releasing their self-titled album in 2010. By combining black metal with anything that isn’t also black metal or kvlt, the band, by its very definition, is divisive ; their accessibility has also expanded this divide amongst detractors. Nattesferd will not change that by any means, but Kvelertak know who’s listening by album number three. Some felt as though sophomore album Meir was a step back for the band as it had songs that have become fan favorites, but was ultimately a top-heavy affair. So what does Nattesferd offer to fans both new and old?

With age, Kvelertak has increased their diversity; still intact are their punk leanings with ample amounts of tremolo riff fueled punch. What's new are the wonderful guitar harmonies of Thin Lizzy and Wishbone Ash and to add to the party aspect, throw in The Darkness too. ‘1985’ is a good mid-tempo showcase of varying styles and accessibility and was the most likely choice for their first single off of the album. As you move through the album, the ante is upped. The title track is a furious burner of a song sounding like something put together by The Stooges, with plenty of melody to accompany the fervor. The three guitar attack on this song in particular works like a punk rock Iron Maiden; a well balanced approach by all members of the guitar section, without it feeling tired.

Erlend Hjelvik’s vocal performance puts him among other great punk rock Scandinavians, as if to sit him next to Refused and Turbonegro; forming an unholy trinity of brash and in your face ice warriors. The balance of hard rock, punk, heavy metal with black metal stylings is about as balanced as ever, with a much more punk rock feel than previous efforts. ‘Bronsegud’ has a stop and go nature about it and the constant “Hey!” thrown in at the end of each verse is enough to put a smile on every Greg Graffin loving Bad Religion fan’s face.

Some songs like ‘Ondskapens Galakse’ work at a slow pace and don’t do much; there isn’t much to set it apart in a positive way from the tracks before it on Nattesferd. Going at a slow pace is not something Kvelertak should aspire to do; mid to high speed and nothing slower; it is what makes their live shows mandatory to attend and an absolute blast overall. Luckily you don’t have to wait around much longer for ‘Berserkr’ and the energy immediately increases. Visions of ‘Blodtorst’ and ‘Ulvetid’; two of the band’s best songs to date come to mind when the band is able to keep up their furious pace, of course now with Scott Gorham aplomb.

Kvelertak have certainly gone into their playbook and found what makes Kvelertak such a great success, and while Meir was definitely not their best effort, they definitely didn’t scrap what worked with that album either. You get a smattering of things from both albums with some spare parts thrown in for good measure, as if to experiment with some new sounds while remaining true to form as a band. ‘Heksebrann’ is an unusual epic for a band that rarely strays from songs topping five minutes; being nine minutes long is quite the tall task for fans. A song that is slow to build but is sure to please, is the best description I can think of.

So to answer the question for earlier, what does the band offer to fans new and old? A lot actually; in this nearly 50 minute package you find a band truly discovering their sound and operating at a level of comfort at times adding to their continually expanding depth. For as much as this is a punk rock album at its heart, this is certainly a heavy metal and hard rock album too. With Stooges’ punch, Thin Lizzy melody, tremolo riffs thrown in with some punk rock and of course a blender to mix it well; Kvelertak are only improving their already well established sound and fan following both in Norway and abroad. Nattesferd is just another album that proves that no matter what kind of musical extremes you enjoy, Kvelertak belong in your catalog for a long time to come.