EPs from 2014 Worth Checking Out 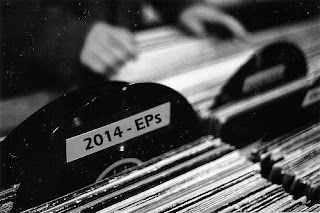 Laziness is something that's too often easy to give in to, especially when it comes to writing reviews.  In an effort to rectify the late dry spell I've had with said reviews, I figured it would be worthwhile to list out some EPs that have been released this year that are more than worth your time to check out.

Check out the five selections I have for you all after the break!

In terms of djent, bands have been very hit or miss for me.  Either I completely dig it or completely don't get it (though I've never been this hateful towards the genre).  There's usually no middle ground.  Periphery is such a band that has been on both sides of the spectrum for me.  Thankfully, their latest EP, Clear, falls on the "completely dig it" end.  Maybe I like Clear more because it's Periphery in a smaller dose, but I'd be lying if I said the combination of poppy vocals and the riff factory that is Misha Mansoor was short of extremely catchy.


My first encounter with Junius was with their 2011 full length, Reports From the Threshold of Death.  What I heard was primarily a hard rock kind of sound with vocals that were eerily akin to Chris Martin of Coldplay.  On paper, I wouldn't call that a recipe for success (maybe for commercial success but that's another discussion for another time).  Junius, however, manages to pull it off in a rather interesting fashion.


One-man, or in this case one-woman, black metal projects seem to be all the craze these days.  Myrkur is a project that comes from Danish musician Amalie Bruun.  What happened to appeal to me about this project is that it seems like something that picks up the ball Alcest dropped.  Harsh screams are interlaced with clean angelic-like signing.  Blast beats are aplenty as are the standard black metal tremolo guitar sections.  The sound also has the lo-fi quality of early Darkthrone.  It's enchanting and cold all at the same time.


While this isn't technically brand new material from the grind legends in Pig Destroyer, it's material that certainly sets itself a part from the rest of their usual output.  It doesn't redefine the wheel, but this is something you won't hear often (or maybe ever even) from a grind band.  Mass & Volume takes more of a mournful doom approach.  The title track is a near 20 minute dirge that experiments with guitar feedback, short bursts of slowly-paced riffs, and even mellotrons.


Out of all the EPs I've posted so far, this is the one that gets my blood pumping the most.  Soma, the latest from two-man Swiss black metal project Bölzer, is filled with riff after riff that will elicit tons and tons of head banging.  Seriously, the amount of riffage here is staggering.  My biggest regret from this past year's MDF was not getting to see these guys tear it up.  Don't make a similar mistake by not checking this EP out.