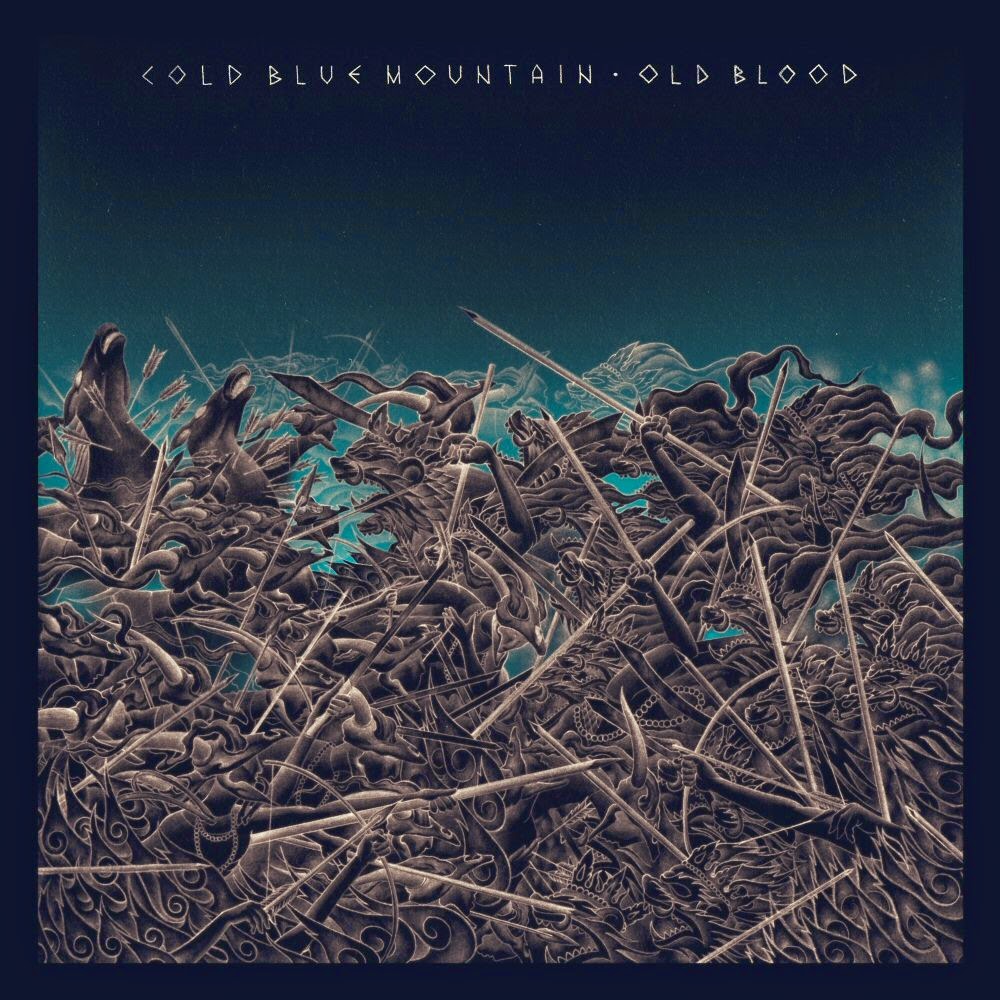 The metal blogosphere is much like the American political media, in the sense that buzz words are used to carry much of the weight and attract the most attention.  Where a Senatorial Candidate may tell the people that he's for "lower taxes" or "anti-gun control" to try and quickly give you a sense of his beliefs, metal bands rely on the increasingly hyper-specific sub-genres like "doom" or "sleepcore" (something I really read the other day).  While these words usually mean nothing when applied vapidly, when chosen carefully they can indeed give the voter/listener a pretty good idea of whether or not they want to proceed in checking out this politician/band.  For me, those words typically include "sludge," "post-rock," "doom," or "blackened," so when I saw three of the four attached to California's Cold Blue Mountain and their second album Old Blood, I decided that yes, this would potentially be someone I'd like to learn more about before voting.  Er... a band I would like to listen to.

Happily, I can say that these genre buzz words were chosen with a decent amount of care, as Old Blood blends melancholy post-rock sections with bristling sludge riffs and some of the best harsh vocals I've heard in quite some time.  The five songs that make up the albums forty-odd minute runtime range in length from about five minutes to eleven, and impressively, each manages to enrapture for the duration.  In fact, Old Blood is probably best listened to in one sitting, as the cathartic ebbs and flows of the music and vocals are well worth experiencing as a complete sonic journey.

That said, each of the songs stands very strongly on its own, contributing to the overall success of the album.  "Seed of Dissent" opens the album with a mournful piano tune, before Brandon Squyres' tortured howls come in, and guitarists Will MaGahan and Sesar Sanchez create riffs on "Strongest Will" that sound right out of What We All Come to Need-era Pelican.  Similarly, the post-rock intro to "Retreat" made me think of Isis, even as Daniel Taylor's drums danced playfully through the introspective guitar-work.  And while Pelican and Isis are apt comparisons at times throughout Old Blood (as are Mouth of the Architect, Cult of Luna, and Deafheaven), Cold Blue Mountain has created a sound that stands on its own.  The band doesn't ape or copy its post-metal forefathers, so much as it stands on their shoulders, looking further above the crowd to discover something new.

The highlight of the album is closing track "Demise."  The track opens with a sparse guitar lick, which continues on as Adrian Hammons' bass riff opens underneath it and then the drums kick in.  This melody continues on, seemingly lost in its own thoughts, content to pleasantly wander for a few minutes before all of a sudden giving way to distorted, elongated chords and Squyres' vocals.  The tempo continues to slow, making "Demise" the most doom-like track on Old Blood, but even as the song slows to a crawl, the energy continues to rise, until halfway through, there is nothing but feedback and a powerful, ominous bass line.  The vocals, drums, and guitars come back soon enough, hammering the listener like a hurricane pounds the shore.  During this sonic hurricane, a guitar solo emerges from the mix; it doesn't over power the slower riffs or drums, but it works with them, a melody amid the tumult.  "Demise" has a chaotic finish; focusing on each additional sound in addition to the whole makes for an incredibly rewarding re-listening experience (which goes for the whole record, actually).  It's a powerful closing track, a microcosm of a powerful, cathartic album.

I hadn't heard of Cold Blue Mountain before Old Blood, but they're definitely on my radar now.  Taking inspiration from other bands and turning it into something uniquely their own, Cold Blue Mountain has lived up to the buzzwords surrounding it in terms of genre I mentioned earlier, but it also lives up to some adjectives as well; words like "exceptional," "a must-listen," and even "important."  I can't see the future, but I fully expect Cold Blue Mountain to soon be at the top of the sludge/post-metal pile, creating music that inspires future generations of bands to pick up the style and make their own tweaks to it.  Hell, if Old Blood is any indication, they might already be there.