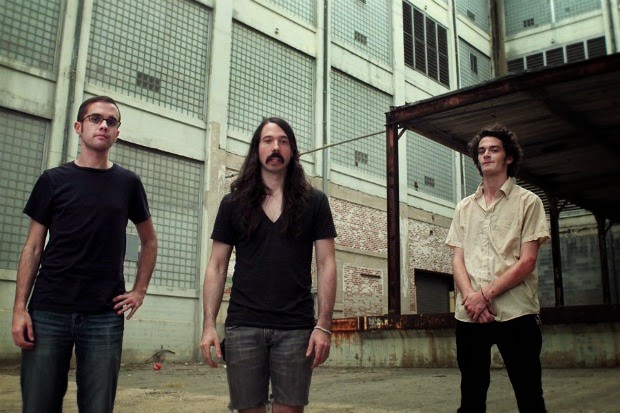 This past Sunday, the Durfette and I skipped our typical Sunday night routine of looking forward to watching Game of Thrones and then actually watching Game of Thrones to venture out to Chicago's Beat Kitchen to catch the jazz/metal/something stylings of Trioscapes.  For those unfamiliar, Trioscapes is a project consisting of bassist Dan Briggs (Between the Buried and Me), tenor saxaphonist Walter Fancourt (Casual Curious, Brand New Life), and drummer Matt Lynch (Eyns).  The band's debut album Separate Realities is one of the Durfette's favorite metal-ish records, so when I saw the band would be in our neck of the woods, getting tickets was a no-brainer.

I had never been to the Beat Kitchen, and it turned out to be a perfect venue for the show.  The bar in front served up some frosty pints of Great Lakes Brewing's Rye of the Tiger, while the music venue in back was small enough to feel intimate, yet large enough to not make the crowd resemble a packed sardine can.  The Durfette and I decided to get there early to catch the opening band, which was a very wise choice.

Rocket Miner is a band from Brutalitopia's native Chicago, and after seeing them live, I am filled with shame at not discovering them earlier.  The band plays a style of instrumental post-rock/shoegaze, which makes it easy to lump them in with fellow Chicago bands Russian Circles and Pelican, along with a touch of Explosions in the Sky.  I have no idea what five or six songs they played, but I was hooked from their opening number, as light guitar melodies danced and played below crushing riffs, backed by the intense drumming of Matt Biancardi (who at one point went so hard he knocked over a piece of his kit).  I honestly can't remember the last time an opening band knocked me off my feet like this; Rocket Miner is definitely on their way to being something huge, so do yourself a favor and jump on the train now by listening to their new full-length Elegy, embedded below, and then picking it up for yourself here.

After Rocket Miner, I was definitely feeling amped and ready for Trioscapes, although I will admit to having some small doubts as to whether they could trump their openers.  An hour later, after their set, I was reminded of that all too familiar lesson as always: I am a fool.  Opening with a new song from their upcoming album, Trioscapes absolutely killed it.  Briggs' bass grooved in and out of Fancourt's fluttery sax, while Lynch kept everything grounded with rock solid drumming.  I don't listen to a lot of jazz, but I know enough to know that timing is exceptionally important, and Trioscapes timing was flawless.  In addition to the unnamed new song, the band played two more off their new record: the title track "Digital Dream Sequence," and "Hysteria."  Both songs sound like a continuation of what the band did on Separate Realities, blending jazz, metal, and experimental music in a way that makes it nearly impossible to tell where one ends and the other begins.  Because of this show, Digital Dream Sequence has skyrocketed up my list of anticipated albums for the year.  Check out a live video of their track "Curse of the Ninth" below.

This was one of the more enjoyable concerts I've seen recently, and I think it's very possible that I've never seen two more talented bands play to fewer people; I doubt there were fifty people inside the venue.  I fully expect that the next time I venture out to see either band, that number will have grown, so if you get the opportunity to see Trioscapes on tour or Rocket Miner in Chicago (and hopefully on tour at some point), seize the opportunity.  You won't be disappointed.