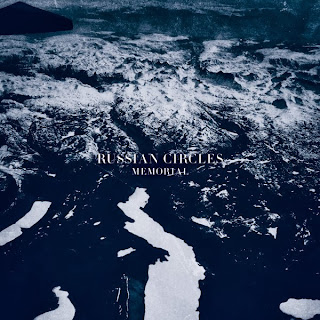 While memorials are somber in nature, they also bring about very awe-inspiring positive emotions. In the case of this Memorial, the fifth full length album from Chicago based instrumental act Russian Circles, the band's legacy is cemented through an overall sound that is serene, heavy, and chilling all at once. Memorial very much stands apart from the band’s previous efforts in its cohesion and culminates into a pinnacle album for Russian Circles.

What makes Memorial a unique listening experience is that it carries more emotional heaviness than it does audible heaviness. Instead of seeking out a cool riff or drum beat, this album will make you sit back and embrace the coldness of the approaching winter. As is a common trait of successfully executed instrumental music, this album acts as a catalyst for your imagination to explore its own depths, as well as those of the music itself. The opening track, "Memoriam," eases us into this journey with a simple, peaceful acoustic guitar that transitions into the first heavy hitter of the album, "Deficit." Walls of distorted guitars are matched with powerful building drum beats and riffs that have a crusty and biting edge, reminiscent of a track like "Mladek." The next two tracks take us through some of the more harmonious sounds found on Memorial. Particularly on the track "Cheyenne," guitar sustain is overlaid by distorted bass and a repetitive, echoing guitar to create a sense of dissonance; one that perfectly builds anticipation for the second half of the album.

Where the first half of Memorial does a brilliant job representing the variance that the album possesses, the second half drives it home. Tracks like the aptly titled "Burial" and "Lebaron" instill a sinking feeling in your soul; one that's emphasized through the relentlessness of heavy grinding sections linked together by intermittent build ups that show off Russian Circles' knack for catchy grooves. It’s these tracks that showcase Memorial’s ominously dark edge. A track like "Ethel," however, breaks up this tangible heaviness of the two aforementioned tracks by using the finger tapped rolling guitar lines you may commonly associate with Russian Circles' sound. These lines are backed by warm and powerful chords that help break up an otherwise cold listening experience. Closing the album is the title track which features label-mate Chelsea Wolfe. The easy listening acoustic guitar passage that opens the album is reused to close it as Wolfe ethereally sings in the background. Wolfe appropriately sings haunting passages such as "I cannot say what years have come and gone. I only know the silence - it breathed on and on. What sang in me sings no more. Where stood a wild heart stirred no more."

Russian Circles have had more stand out singles in the past, but Memorial is without question the most complete album they've put together yet. The heaviness of gritty distorted guitars mixed with an equally distorted bass, wicked drumbeats (as only Dave Turncrantz can deliver), and soft acoustic guitar passages all culminate into what is a truly all-encompassing and chilling listening experience. It's an album that will require a couple listens to fully sink in, but once it does it will hit you at your core. Brace yourselves everyone. Winter is coming.

- Mick
Posted by Brutalitopia at 2:17 PM