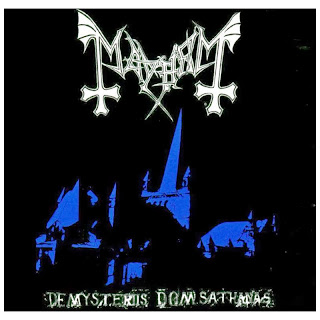 Happy Halloween all and welcome to a special edition of Fear Of Tomorrow. Choosing albums that make you think of horror, fear or just plain Halloween can be a daunting task. From Abigail to Don't Break The Oath, Walk Among Us to Pure Holocaust; the album all depends on the listener. For me I decided to do with fear and with that said Mayhem's debut album De Mysteriis Dom Sathanas barely needs an introduction.

One of the reasons that this album is so scary upon first listen are Attila Csihar's vocal performance; clearly something from beyond the grave was the inspiration for album opener 'Funeral Fog'. To add to the macabre allure the most violent of metal stories has always surrounded Mayhem, namely the murder of Eurynomos by Varg Vikernes (Burzum) and the fallout from said incident. Try thinking about this during the slower and more drawn out sections of 'Freezing Moon' and your mind begins to wander aimlessly wondering what causes people to commit such atrocities. Compound this with the suicide of part time vocalist/lyricist Dead and the river most certainly runs red through this album.

Atmosphere runs amuck through 'Pagan Fears' and showcases the way black metal builds through repeated listens; more and more riffs reveal themselves and the music becomes much more clear. Lyrically a focus is on worship of all things lunar, the night, and darkness as a collective. Memories of staring into the night sky during a December evening here in the northeast run through my mind; much farther east and north as well these Norwegians and I drew some parallels.  Religion and forms of paganism contained within rival some of the very best possession stories written for Hollywood and the overall feeling doesn't leave you feeling any better; instead left feeling on edge not knowing what to expect next. 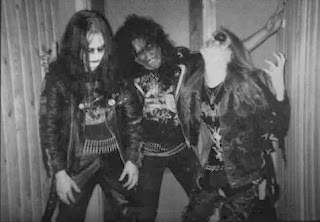 The original version of Mayhem or pre-murder version of the band left us with a great and influential EP and this ultra fine slab of black metal of a debut. The influence from just this album on the black metal that was to follow is nearly unrivaled and universally cited as a linchpin of the genre, especially those of them from Norway's large and vibrant scene. So enjoy your Halloween and enjoy a few more tunes below that I feel fit the day quite well.

Of course I included this: