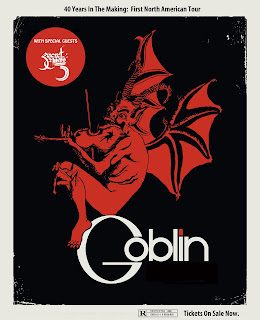 My experience with Goblin goes as far as watching Suspiria and creating a Goblin Pandora station. That's it; certainly not extensive enough to call myself a big fan, but I do like their music. So when they announced their first US tour EVER, I had to go, both for the music and the fact that 40+ year old Italian progressive horror soundtrack bands don't have their first ever US tour everyday. As an added bonus, Chicago's Revolution Brewery was releasing a special one-time only imperial red ale to be tapped at the show. Fucking A.

I showed up with some pals about halfway through the opening band, Secret Chiefs 3. After grabbing the obligatory Red Skull Ales (which were absolutely delicious), we pushed our way to the back of the crowd. The first thing I noticed about SC3 was that they perform in hooded cloaks, a la the Nameless Ghouls of Ghost or Sunn O))). Fun fact, however: SC3 actually predates both of those bands. The music was very good; not being familiar with the band I have no idea what songs were played, but I know that at various points a violin, trumpet, and keyboard were used to great effect, creating a sort of atmospheric instrumental sound perfect for a Goblin opener. I made a note to check more of this band out. Plus they bowed to the audience after every song, and while maybe it was just the beer, I found that pretty gnarly.

After that, it was time for Goblin. During the break between bands, I managed to look around at the fans in attendance. It was a pretty diverse crowd, containing everything from dyed in the wool metalheads to Level 38 Dungeon Masters and everything in between. I started thinking about how cool it was that all of these different people's musical tastes overlapped onto Goblin like a musical Venn Diagram, and how amazing it was to be there and be a part of it, but then my buddy brought me another Red Skull and my thoughts drifted elsewhere.

Goblin took the stage fifteen or so minutes later, and man, they were a sight to behold. How a band holds your attention when you're aren't extraordinarily familiar with their material is a fantastic measure of the band, and Goblin passed this test with flying colors. I feel as though instrumental bands always have to be on point to hold attention, and progressive bands have to be going somewhere with their, er, progressiveness to not appear pretentious and overbearing, and Goblin was able to do both things things simultaneously. The band members played with amazing fluidity, and the sound was mixed supremely well, something I have not always felt about the Metro. Just as incredibly, during songs like "Suspiria" and "Mad Puppet," from the Goblin-penned soundtracks to Suspiria and Profondo Rosso respectively, were performed in front of a screen showing clips from the movies. It was a great move, a way to really pull in the segment of fans in attendance due primarily to their familiarity with Goblin's film scores. Along with the scores, a bit of research tells me that Goblin's setlist also drew heavily from their non-soundtrack album Roller, including "Dr. Frankenstein," my personal favorite song of the evening.

- Durf
Posted by Brutalitopia at 4:11 PM