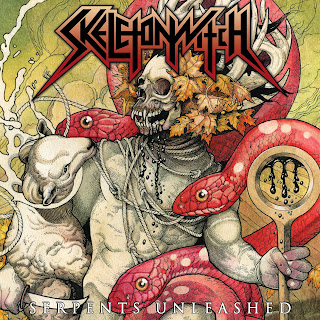 Veterans of the tour scene and blackened thrash metal fan favorites; Skeletonwitch have returned with their 5th full length Serpents Unleashed. Skeletonwitch have been a busy band as they have appeared all over the world touring for their previous effort; Forever Abomination. With all of this extra mileage it is a wonder they even had a chance to record new material. Yet they have seemingly matched their previous efforts and potentially pushed it all a bit further.

One would expect the maddeningly fast thrash to be omnipresent and it sure is, with some of the bands' coldest sounding collection of songs this side of Beyond The Permafrost. This time of year is quite perfect for them to put out a track the like of "Beneath Dead Leaves" for obvious autumnal reasons as it fits the weather to a veritable T. Vocalist Chance Garnette is as vicious as ever; throat shredding vocals permeate the visceral attack of strings and percussion and may cause your head to explode from the maximum velocity being forced through all matter of speakers and/or amps.

Drummer Dustin Boltjes is completely let out of the cage for his 2nd album with the band as he plows through drum kits and just about everything in his path. Guitars pour out riffs when Nate Garnette and Scott Hedrick are on duty; solos soar and add a balance of melody to the carnage. It is also nice that the revolving door that is their bassist has stuck for a while in the form of Evan Linger who now has recorded his 3rd album with the band.

This album's presence seems more like a palatable version of Darkthrone's best moments from the '90s coupled with undeniable thrash flourish; the combination of genres has finally come full circle as this might be the very best of both styles that the band has yet been able to blend. "Unending Ever Living" acts as a change of pace track with the tempo slowed considerably, then picks up and continues the aural bludgeoning. It is also worth mentioning that the band has returned to the album art of one John Dyer Baizley (Baroness) as it is a great addition especially when considering the fact that some killer tour shirts will get made and adorned with the excellent cover image.

2013 has been a great year for metal but it seems especially backlogged with great albums like those from Carcass, Exhumed, Gorguts, Inquisition, Craven Idol, Death Angel, and Hail of Bullets to name a few; it can be easy to overlook this fantastic Ohio quintet. Skeletonwitch have carved a niche out for themselves and are well on there way to this blogger's year end list. Long live the 'Witch!