Well shit, that was a larger break than I anticipated.  A whole bunch of THINGS HAPPENING converged around my life over the past month, culminating in my taking an extended hiatus from lifting, and then from writing about said lifting.  Which is ok, because as much as I love working out, and the centering effects it has, sometimes you just gotta sleep after a crazy day/week/month.  Basically, the Durfette and I made the decision a couple months ago that we were going to leave Idaho, and that we should do it sooner than later.

What followed was an absolute maelstrom of getting the house ready to sell, looking for a new job, and deciding where to live.  Which seems easy enough, until you consider we had to have the entire interior of our house painted, the painter took a day and a half longer than he said he would, he left our house a giant fucking mess that took another two days to clean, I had to fly to our new to-be-home city of Nashville for a job interview, we had to meet with realtors, the Durfette and I were still working ten to twelve hour days, and THEN both Durflings came down with Hand, Foot, and Mouth Disease.  So... yeah, it's been a couple of weeks.  But that's ok.  Things are sliding into focus now; we have a list date on our house, we have a plan for getting from Boise to Nashville, the Durflings are happy and healthy, I landed what amounts to my dream job with a great company, and the house is in the process of being packed.  Most important for all of you, I'm now able to get back into the garage, pump some iron, and rock some tunes, so I can share those experiences with you!  Enough dilly-dillying; let's get to it! 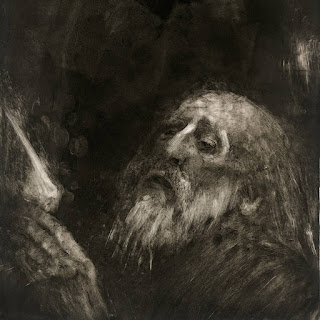 On Sunday night, I got my workout stuff ready for Monday morning, but I didn't actually believe it was going to happen; even when my alarm went off and I got up, I still was in disbelief.  It wasn't until I had finished my coffee and pre-workout protein shake and sauntered out to the garage that it hit me: holy shit; I'm going to get a workout in!  It was a great feeling.  Of course, then I realized that I needed some music, so I hopped over to Bandcamp and just clicked on the first promising-looking album I saw.  Serpent Column is definitely playing black metal, but unlike the long-form, atmospheric concoctions that have begun dominating the genre, Katartisis is an aggressive jolt of adrenaline that comes at you quick and hard.  A lot of the more pensive black metal bands get me strolling out of my garage during workouts, gazing at the stars and nature that surround my house.  And that's lovely; I honestly think seeing so many stars is one of the things I'll miss most about Idaho.  But Serpent Column doesn't give a fuck about my wistful pre-nostalgia; Serpent Column wants me to sweat and ache and get work done.  I feel like due to the song lengths, there's going to be some temptation to refer to Katartisis as black-grind, and that's fine, but this feels like black metal through and through, just black metal that knows a tight, blistering minute-nineteen can be just as good for the soul as a thoughtful, meandering twelve and change.  Katartisis came out August 27th on Dissociative Visions. 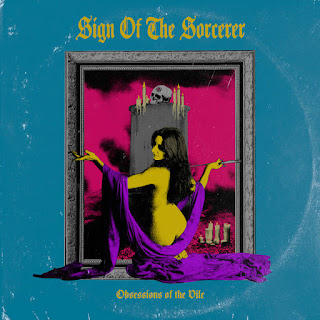 As I've gone through this journey of listening to as much music as humanly possible this year, a couple of things have jumped out at me regarding my listening habits.  The first, which isn't super surprising, is that of all the metal subgenres, black metal is far and away my favorite and most-listened to.  The second, which I guess also isn't super surprising, is that I am all about psychedelic/stoner/groove doom-type bands.  So Obsessions of the Vile, the debut full-length album from Sign of the Sorcerer, is absolutely my jam.  Dark, fuzzy, evil-sounding jams permeate the album, and in a year in which I've seen a whole lot of lo-fi black metal albums about vampires, SotS' "Nosferatu" is far and away the best vampiric jam I've heard yet.  I gotta say, as excited as I am for our upcoming move to Tennessee, learning this band is from nearby Knoxville is just adding to the good vibes I'm feeling.  Obsessions of the Vile came out August 25th, and it is absolutely going to get a lot of play 'round here as we prepare to move across the country.

Shy, Low - Snake Behind the Sun 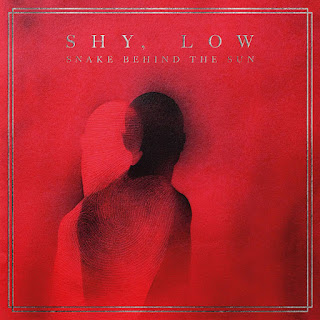 Instrumental post-rock is my jam, and Shy, Low is no exception.  Snake Behind the Sun reminded me a lot of Brutalitopia favorite Russian Circles, so much so that I texted Mick and said "Check out this Shy, Low promo; it reminds me of Russian Circles."  AND he agreed with my assessment, so you know it's legit.  This is post-rock that, yes, makes me want to just sit and look at the stars, but also has a drive to it, an urgency that doesn't always come across as heaviness, but is certainly demanding of your attention and keeps you engaged.  I was really quite pleased with how Snake Behind the Sun functioned as a workout album, and then again later as a sunny day driving album, and then again again even later as a sit in quiet contemplation at the end of a long day with a football game on in the background album.  I was tremendously excited to discover this band, which is awesome, because they have a ten year old discography that I can dive into now, which I will, because this is really, really good stuff.  Snake Behind the Sun is out October 8th on Pelagic Records. 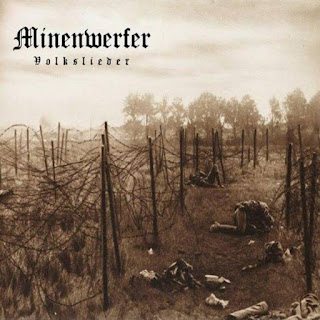 It seems like recently there's been a deluge of artistic projects set during World War I, which is great; growing up, I knew of dozens of books, movies, tv shows, and even some albums that were all about World War II, but pretty much nada on WWI.  And it's nice that people are starting to pay attention to the Great War, because it sounds like things were pretty fucked up and it was absolutely horrific.  Not that all war isn't pretty fucked up and absolutely horrific, but even moreso.  Anyway, Minenwerfer hail from Sacramento, CA, and Volkslieder is an absolutely brutal black metal album in every way possible.  Truly punishing stuff that I was ready to put close to the top of my Albums of 2021 list... until I learned this came out in 2010, rendering everything I just wrote pretty moot.  Except for the parts about Volkslieder kicking ass; that part is still true.  Holy shit man.  I know I've said many, many times that I'm bad at this, that I miss out on entirely too many bands, but to be this blown away by an album that's over a decade old, by a band that I've never heard of?  Wow.  So yeah, Volkslieder has been out for over a decade, and it's really, really good, so you should listen to it.

Thrice - The Artist in the Ambulance 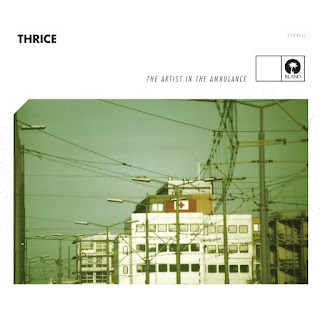 If you've been around for the past few months, you know we started doing a monthly recap playlist post called All We Love, We Leave Behind.  I highly recommend you check it out, because it's good and fun and you get to read people other than me, but especially because I'm about to reference our most recent one, and if I knew you'd all read it, I wouldn't have to put this caveat in.  But I don't trust any of your shifty faces (Ed. Note - We here at the Töp know it's not a good look to refer to our readers as shifty, and we apologize.  Unfortunately, tenure is easier to get here than it is at most universities, so there's nothing we can do about it except ask Durf yet AGAIN to refrain from insulting our readers in any way, shape, or form.) and so I'll have to talk about it.  Recently Thrice released a new track that makes me feel cautiously optimistic about their upcoming album.  That cautious optimism must have carried over, because when I woke up this morning, I was overcome with a desire to listen to some early Thrice.  Vheissu is my favorite Thrice, but it's a little too sleepy in parts for a 2:30 workout, so I went with Artist.  This album is another fantastic one; front to back packed with energetic riffs, tremendous drumming, and absolutely perfect emo/post-hardcore wails from Dustin Kensrue.  It's also packed with plenty of lyrics about how the world is going to shit, but people are paying attention, so there's hope, which lol; that didn't age well.  The Artist in the Ambulance has been out for like seventeen years, so you should probably already know what it sounds like already, for fuck's sake. (Ed. Note - Seriously, we're so sorry.  We've been trying for years to get some form of discipline, ANYTHING to stick, and there's nothing we can do)

So that's the week!  God it feels good to be back in the garage working out and then typing all this out.  Hopefully I'll be back to a consistent routine for awhile; my last day of work in Idaho is today, and then I have a couple of weeks off to get things ready to move, so I should definitely have the time to make that a reality.   Of course, then I drive to Nashville and start my new job, so who knows what that's going to do to things.  So I guess we'll just take it week to week and see what happens.  In the meantime, keep lifting and keep jamming.  Have a great week.