All We Love, We Leave Behind: The Töp's Monthly Playlist, June 2021 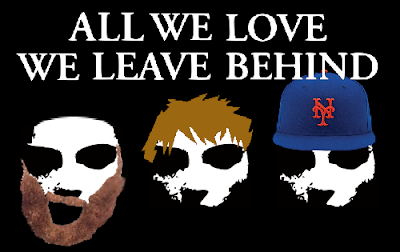 Durf's Weekly Workout has been a shot in the arm for us here at the Töp. On the one hand, it's been a fantastically entertaining article to look forward to every week. But at the same time, when have we ever been known to put out content on a consistent schedule? While it's been an identity crisis that has no doubt worked to our favor, it's also been a call to arms for Tom and I to at least try and carry some of our weight. So without further ado, we present "All We Love, We Leave Behind." Affectionately named after the Converge album, this monthly post will feature a collaborative playlist pinpointing tracks from this year that have been in heavy rotation for us. You may see some end up on our year-end lists. Some you won't. But rest assured they'll make for some eclectic listening. We'll try to keep the tracks as recent as possible, but you can at least bank on them being from this current year. Each of us will present 6 tracks because three 6s = well... you know.

With concerts starting to be rescheduled again, it's been a reflective time for me thinking about my past experiences with live music. Fortunately, I can't say I've had any major regrets. That is, until now that this new Amenra album dropped. I realized they opened BOTH times that I saw Neurosis and didn't pay them much mind. Boy was that an epic lapse in judgement. This band is all about changing from near dead-quite lullabies to ear-piercing walls of distortion on a dime and it's fantastic. "Voor Immer" is easily the most haunting track I've heard so far this year.

Perturbator - "The Other Place"

Being that I tend to listen to video game soundtracks more than I'd sometimes care to admit (more on that here), this whole synthwave thing that's taken its hold within certain corners for the metal community over the past few years has certainly been a welcome addition to my WFH playlists. Perturbator is one of the key figures in that scene and just came out with a new album last month that makes a great addition to the discography. If you're looking for something that's easy to zone out to but still has some dark undertones, this could be just the thing.

This is the kind of sludge I subscribe to. It's grimey but also keeps a tempo that's fast enough to hold my interest. To go along with that, the vocals are eerily close to Tom G. Warrior and sing about "a small industrial town in Sweden being brutally murdered, left to rust away, and then fooled into believing in the false hope of prosperity, promised by big American tech." It's one interesting cocktail to take down.

Durf really has zero chill sometimes. As he'll gloat about later on in this playlist, he beat me to the punch in calling dibs on Panopticon. But that's ok. I don't hold grudges. Instead, Nordgeist can more than hold me over in getting my atmospheric black metal solo project fix. This reminds of Paysage d'Hiver if that project actually had normal production value which is funny because when I looked up this album again I noticed that is was released by the same label. So I guess my instincts haven't grown too dull from all this not writing this year.

This is another band that I've slept on. Having been around for 15 years, Craven Idol evokes many extreme bands of old (Bathory, Candlemass, and Sodom to name a few) but puts their unique stamp on it. Nothing lets up for a second on this track and I couldn't love it more because of that. Their new album, Forked Tongues, comes out next month via Dark Descent.

A never-ending roller coaster of emotional highs featuring clean female vocals and lows that summon the bellowing of the nastiest hellspawn, The Slow Death put together some great atmospheric doom/death metal. Plenty of triumph and despair to dish out from "Famine" alone. Their album, Siege, comes out later in August via Transcending Obscurity and is a must listen.

Yeah, I'm all about this.  George Clarke has some of the best harsh vocals in the biz, and I didn't miss them one single, solitary bit.  If "Great Mass of Color" is a bait and switch single for an overly heavy album, then it'll be fine, but if it's indicative of the rest of "Infinite Granite," then it could very well be one of my favorite albums of the year.

Honestly, when Mick pitched the idea for this post, one of the big things he said was "No overlap."  So this pick has less to do with "Dead Loons" than it does wanting to make sure I get to pick the Panopticon song, and "Dead Loons" was the first one I thought of.  ...And Again Into the Light is a stunning, monumental album, and as the first "proper" metal track on it, "Dead Loons" helps establish that tone early, and then each subsequent song continues to build on that momentum.

Honestly, I'm tired of being the only person I know talking about Psychonaut.  Unfold the God Man was an incredible album, and "The Great Realisation" picks right up where that left off.  It's as sprawling as a jam band, but laser focused through a post-metal filter, like if Dave Matthews invited Steve Von Till and Scott Kelly to help him do "All Along the Watchtower."  Yeah, that's right, I'm invoking DMB to sell you on how good Psychonaut is; deal with it.

I covered Dödsrit's Mortal Coil in a Durf's Weekly Workout post a bit ago (actually, four of these six albums have made DWW appearances), and I'm bringing it back up here because it's absolutely worth talking about at least twice.  "Apathetic Tongues" is the closing track to this blackened death beast, and it brings things home with a suitable fury.

Sing the Sorrow is one of the most important albums in developing my musical palate, and it remains one of my All-Time favorites.  It also came out eighteen years ago, and with the exception of a few tracks here and there, as well as seeing the band live (an incredible experience), AFI hasn't really done much to get me excited.  So when I randomly stumbled onto Bodies, I was more "Eh, why not?" than I was actually stoked.  By the end of the album, I was fully onboard; Davey Havok and Co. have semi-reinvented themselves again as a goth-pop outfit, and while the sound is a ways away from Sing the Sorrow, I'm still very much here for it.

19 albums in their career, Darkthrone shouldn't be able to write a song with as many heavy riffs as this one. These Norwegians break into a sick groove and refuse to let you leave without a neck brace. Also prepare for some mellotron on your way out, because why not add an extra wrinkle as to why this song deserves your attention.

Helloween - "Out For Glory"

Power metal, played by power metal royalty. Not many bands can claim to have played the style better or even originated it like Helloween can surely boast. Their first full length album to include all 3 of their vocalists Kai Hansen, Michael Kiske, and Andi Deris is a revelation. This is the opening track and an eye opening one at that.

Now for something completely and utterly gross. These Seattle scumdogs know how to bring a nice level of disgust to their music. The tone here is vile, the kind that evokes the feeling of your eventual demise. If no frills death metal and impending doom are your kind of thing, Cerebral Rot are the band for you.

More power metal? I can assure you that these ladies really know how to lean into big power metal riffs and grandiosity. They also take the time to give room for melody to take root here before bringing in a solid amount of gruffness while shouting the title of the track. The whole song is an exercise in balance, without letting too much of one thing overshadow the other parts or the whole. This song is the perfect sum total of its parts.

Pharaoh - "We Will Rise"

I promise this will be the last power/heavy metal song of mine for the month, but I'll be damned if this wasn't a solid month+ for the genre. Right from the outset, this has a large and epic feel. For those unfamiliar lead singer Tim Aymar was the lead singer for Control Denied's first and only album, and he is now 5 albums deep into Pharaoh's career with this latest entry, The Powers That Be. This is the kind of power metal related work that doesn't need you to be a fan of the genre to properly enjoy it, this track perfectly encapsulates what makes Pharaoh one of the best to do it of recent.

Ending with another classic band, very few bands are as special to me in extreme metal in the Carcass are to me. With Surgical Steel being a career revitalizing effort on its own, it sure is nice to bite into something from its next full-length follow up, Torn Arteries. The song fits more into the Necroticism sessions than Heartwork/Surgical Steel which is perfectly fine in my book. The unsettling visuals that accompany this track on YouTube give this a little added oomph and not just what ends up in the toilet after viewing it.