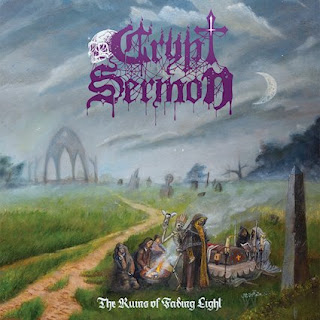 2019 has been a strong year for doom, the fore bearers Candlemass, Saint Vitus have re-emerged and newer bands like Smoulder and Magic Circle continue to make their presence felt in the underground. But what about 2015 critical darling Crypt Sermon? Their epic ode to traditional doom, a stellar debut and this writer's top album of said year was sure to be followed soon. But life intervenes. Their bass position was temporarily held by Matt Knox of Horrendous and their drummer Enrique Sagarnaga and guitarist Steve Jansson have been busy playing shows with Daeva. So here we are four years later and finally the band has decided to put out their sophomore effort, The Ruins of Fading Light. Again vocalist Brooks Wilson is responsible for the breathtaking artwork as well as excellent pipes throughout the disc. Enter new bassist Frank Chin who was also recruited from Daeva and we have Crypt Sermon circa 2019. Will you want to go back to the Garden or head straight for the Ruins? More after the jump.

Opening the album with a five minute trailblazer, chock full of fiery guitar solos and Wilson's brooding voice is a smart move and one that set the listener up for some of the deeper cuts on the album; because barring the three interludes, that was the shortest song on the entire LP. A song that really puts the band in the best light is one they have played live long before this album had a name, that would be "Our Reverend's Grave." Sagarnaga's drums follow around Wilson as they pound hard behind the crooning and operatic vibrato. The wonderful doom riffs drive the song and so do the wonderful melodies put forth by the collective. Lead guitarist Steve Jansson is a marvel as he finds the right amount of technicality to remain true to the song and give it a little more breadth.

Death as a theme is not surprising given the genre and the bands Crypt Sermon pays the most homage to. Religion is central to the aforementioned "Reverend" and also on "Christ Is Dead." Played after the first of the interludes, it becomes a tale of a group missing religion with nowhere to turn but to darkness with their leader nowhere to be found. Lyrically, this album hits the nail on the head with the atmosphere and it goes hand in hand with the wonderfully painted artwork. Powerful and driving on the longest track on the album "The Snake Handler" sees the guitars resemble a dual lead powerhouse with a modern era Dio at the helm with the drums serving as the bedrock where everything comes back down to earth.

Crypt Sermon make the four year wait feel like an afterthought. This is a very talented group of musicians who are doing something very special down in Philadelphia and making epic doom metal more common than anger. This is a fantastic doom metal album in a year where that has happened a few times over. But make no mistake, Crypt Sermon are the finest doom metal band in the country in 2019. Well done gents!