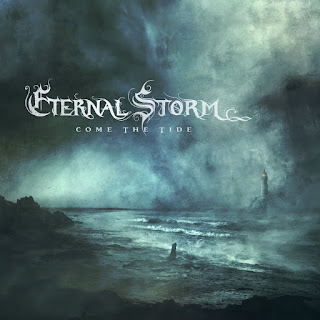 "Nuance" wouldn't be the first term to come to mind if you were asked to describe death metal. "Attitude" or "grit" would probably be more common knee-jerk reactions. But in the case of the full length debut from Spain's Eternal Storm, one starts to evaluate death metal more as a craft rather than just an adrenaline-fueled juggernaut. The amalgam that is Come the Tide breathes new life into the genre by absorbing several other styles into the death metal framework, coalescing into a simultaneously heavy and moving listening experience.

"Through the Wall of Light" opens up the album in two parts that will give you a healthy dose of the dexterity the album has to offer. Transitioning from soothing clean guitars into a flurry of crashing drums and momentous guitar riffs, the opening seconds had me hooked immediately. The progressions of this two-parter make it clear that Eternal Storm has an impressive command of balancing several styles effectively. The softer passages have a serene bleakness to them, while the heavier outbursts propel the music forward in new and engaging directions; a big contributor to these new directions being the vocals. From heavier screams to softer laments, the vocals demonstrate how they are just as varied as the instrumentation. In terms of style, think of the guttural, throaty mix of Amon Amarth meeting the melancholy of Katatonia.

With my personal favorite track, "Detachment," the album extends the momentum it built with its opening. By allowing the guitars to run free in search of melody, the track's more aggressive elements are given even more weight. The guitar patterns are intricate but not for the sake of being so. The track also ends with a huge riff that brings everything into the realm of the anthemic; something that brings to mind progressive bands who focus on a similar kind of majesty. The rest of the album continues in this spirit of mixing and matching styles. The midpoint of "The Mountain" features some lingering guitar notes that echo in an Ahab-esque funeral doom fashion while the album's two longest tracks, "Of Winter and Treason" and "Embracing Waves," focus more on accentuating the juxtaposition between intensity and placidity in long-form.

Come the Tide is a phenomenal debut. It strikes a near perfect balance of energetic heaviness along with introspective melody and continues to maintain that balance in a dynamic and captivating fashion over the course of an hour. This is a shining example of how an album can be much more than the sum of its parts. The parts themselves don't particularly add up on paper, but the end result of the sum is awe-inspiring, quite frankly. Expect to see this one on many year-end lists.