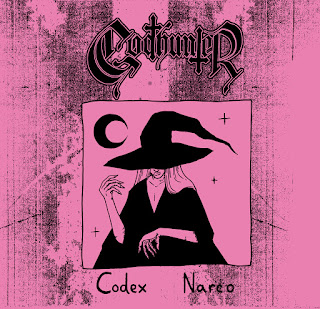 For a band that's only been around for six or so years, Godhunter sure has been busy.  In addition to their stellar debut full-length City of Dust, they've put out six EPs, splits, or collaborations, each of which has seen their brand of sludge pulled and tweaked in different directions.  Their newest album, Codex Narco, continues that pattern, but with another, bigger twist: after a 2015 tour, a few members of the band left amicably, leaving guitarist/vocalist David Rodgers, drummer Andy Kratzenberg, and keyboardist Matthew Davis in the band.  Rather than find new members to flesh out a lineup, the trio invited musicians from other bands to play on Codex Narco.  There's no point in burying the lede; the result is a really cool album that's rooted in Godhunter's traditional sludge sound, while still charging forward.

"A Dread of Some Strange Impending Doom" certainly lives up to its title, as its fuzzed-out slow jam features background vocals, courtesy of CHRCH's Eva Rose, wailing under Nick Genitals' (Methra) slow bass line and a plodding, methodical drum pattern.  It's a quick and breezy track at two minutes, but it sets up Codex Narco nicely.  "Like Glass Under Black Fingernails" keeps the doomy mood alive, with soaring clean vocals alternating with anguished roars above a seeming simple and steady musical baseline.  Josh Thorne's shift between mournful singing to spine-chilling rasps is incredible, stealing the focus so much that it took me a few listens to hear all the ambient shifting going on in the music underneath the vocals.

"Cocaine Witches & Lysergic Dreams" is the standout track on Codex Narco, a shot of sludge filtered through Depeche Mode and the Drive soundtrack that comes out of left field.  On an album that deviates substantially from Godhunter's past work, "Cocaine Witches & Lysergic Dreams" is perhaps the biggest departure.  There's an undeniable groove to the song, and when it gets going, it almost feels danceable.  Josh Thorne's vocals are again superb, and the hook to this song has been lodged inside my brain since the first time I heard it.

The most pleasant surprise on this EP is "Walking With a Ghost," a Tegan and Sara cover that ultimately emphasizes the best parts of the original while offering Godhunter's unique twist on it.  I have mixed feelings about the band's cover of Nirvana's "Something in the Way," from their split with Destroyer of Light; it's ok, but doesn't necessarily build on or add anything to the original (which in fairness is my favorite Nirvana song).  It's a testament to Godhunter's growth and skill as a band that "Walking With a Ghost" doesn't have that problem (using clean vocals from Nick Genitals instead of harsh, as they did in the Nirvana cover, definitely helps), and the result is a catchy, poppy, sludgy amalgam that through its contradictions manages to be inescapably infectious and endearing.  As a bonus, a music video of the song is being made (by Mitch Wells from Thou) to support suicide prevention.  So not only is it a terrific cover, but it's being put toward an amazing cause.

Codex Narco is a complete change of pace from Godhunter, which shouldn't be all that surprising given the roster turnover and help from guest vocalists and musicians.  The band has always been ambitious in their messaging, wearing their politics on their sleeve, but the shift toward issues more personal than political has elevated their music to heights previously unreached (the band's politics still factor into Codex Narco, however, as the album's profits will be donated to Planned Parenthood, which is sincerely fucking cool).  Codex Narco is still a sludge album, but it uses the sludge Godhunter has grown so adept at crafting as a launching pad into something new entirely.  I've tremendously enjoyed all of Godhunter's previous albums, splits, and EPs, but Codex Narco is the first one that I feel like I love and want all my friends and fellow music fans to listen to.  Codex Narco is out May 19th, so be sure to pick it up then to support a great cause and get yourself some groovy tunes.

You can listen to "Like Glass Under Black Fingernails" now, but not here; it's streaming over at Decibel.

- Durf
Posted by Brutalitopia at 1:11 PM