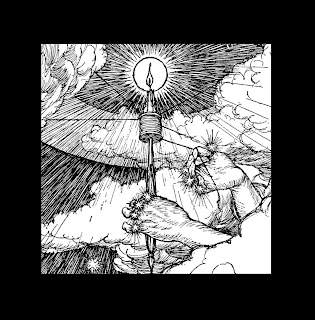 Last year, Oathbreaker landed on many a year end list for blending ambiance with the aggression of hardcore. While it was a release that I thoroughly enjoyed, it seemed to delve too far into tranquility, without striking the necessary balance with the volatile energy that hardcore is known for. I loved the idea of the sound, but ultimately wanted something a little more relentless. "Ask and you shall receive" is what I remember thinking to myself immediately after listening to Suna Kulto, the latest release from Grand Rapids, Michigan three-piece Dakhma. Every year there's bound to be an album or two that I miss out on before I put my year end list together; you can count this one as a huge miss for 2016.

What Suna Kulto capitalizes on the most is creating an atmosphere that is both ruthless and captivating; so much so that it easily escapes you that the 40 minute run-time of the album is only split between two 20 minute tracks. The album often finds this balance by exchanging sections of echoing clean guitars that transition into the band losing their collective control into a foray of earsplitting screams, swirling guitar riffs, and relentless drum rhythms. These transitions are often sudden and even jarring at times, but are executed in a no nonsense kind of way that makes it clear that the band isn't stuffing sections with pointless filler. Whether harmonious or cacophonous, each shift in the music sucks you deeper into the album's sonic landscape.

It's not an album that you would think of as catchy, at least in the traditional sense, but what comes through are long passages that flow so effortlessly together that the whole piece of music stands out more than any one particular section. There are no typical vocal hooks or huge riffs that carry the songs. The guitars drive forward, continually unraveling into slight variations of their previous rhythms. Don't think the guitars steal the spotlight, however. The black metal production value sharpens the album's "teeth", while crashing drums and grating female screams measure up to the bar that's been set by the punishing guitar performance.

Atmospheric, vicious, enthralling; Suna Kulto is many things, but uninteresting isn't one of them. Through the coldness of black metal and the aggression of grindcore/hardcore, Dakhma has created an album that, while recognizable, cures many itches. Its intensity juxtaposed with its placidity creates an atmosphere that is more than simply ambiance. Experiencing polar opposite speeds of music being woven together may not sound great on paper, but the end result here is nothing short of intoxicating. It's a HUGE shock to me that Dakhma hasn't exploded in popularity yet, but with Suna Kulto under the band's belt, it should be safe to say that we can expect more quality releases to come from them; hopefully sooner rather than later.