The Ditch and the Delta - Hives in Decline 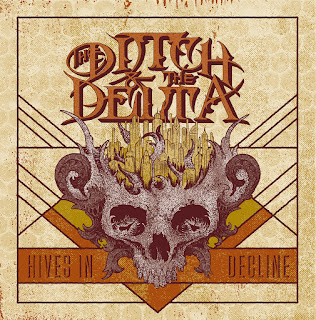 Hives in Decline opens with a low, quiet level of feedback that takes its time picking up steam; you know it's heading for something exciting, but you gotta wait for it.  A minute and a half later, The Ditch and the Delta kick it into high gear, with a monster of a riff undercut by thick bass and slammin' drums.  Guitarist/vocalist Elliot Secrist, bassist/vocalist Kory Quist, and drummer Charles Bogus are completely in sync throughout the album, and the pulverizingly groovy end result of Hives in Decline is a fairly astonishing accomplishment for a trio.  Music this big and dynamic just seems like it should have more people behind it. 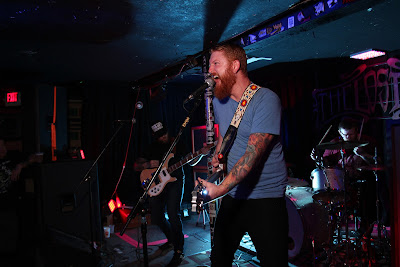 The wondrously-titled "Fuck on Asphalt" roars out of the gate with a riff like a getaway car with the cops in pursuit; it's an absolute adrenaline-soaked burner of a start guaranteed to get you into the spirt of things.  "Fuck on Asphalt" eventually slows from a raging fire to a slow burn, featuring guitar solos from Eagle Twin's Gentry Densley over Bogus' crashing symbals as Secrist and Quist mellow into a trance-like groove. It's a devastatingly cool sound, and when the song picks up speed again - behind Secrist and Quist absolutely bellowing "Go fuck yourself" - into the home stretch, it has all of the fiery energy of the beginning.  Loud/quiet/loud or hard/soft/hard progressions aren't exactly revelatory in metal, but "Fuck on Asphalt" is incredibly well-written, and  so goddamned fun, which are not always things you can count on.

"Sleeping Dogs" roars in with a QOTSA-esque bass riff that ingested a fuck-load of steroids, before moving into short, sharp guitar bursts over a dancing rhythm section.  Quist's driving bass line of "Sleeping Dogs" is probably my favorite part of the song, but then I think about the playful guitar work that Secrist throws down while the other members go silent, or about how Bogus' is in complete control behind the kit, and I take the easy way out and admit the song wouldn't work without all three of those things.  It's about mid-way through "Sleeping Dogs" that you first start to feel like you're listening to something really special, like when you realize a pitcher has a perfect game going in the fifth inning. 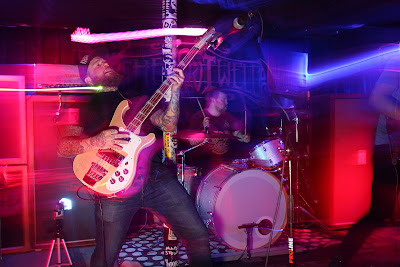 "Dry Land" is an interlude track that feels like the part in a western where the sheriff meanders into the saloon and ambles past all the outlaws, gamblers, and gunfighters, then sits at the bar and orders a whiskey with his back to all of them, with not a trace of fear and ice water running through his veins.  I know I'm typically critical of interlude tracks, but "Dry Land" is a great addition to Hives in Decline, a chance to catch your breath that is still engrossing.

"Til Body Quits" is actually a pretty straightforward sludge jam at the beginning, but its bridge is a hypnotic bog, Quist and Bogus lulling you into that great couch lock feeling while Secrist floats a solo into the ether.  One of the many great things The Ditch and the Delta get right on Hives in Decline is the soloing.  They're never ostentatious or showy; they always fit the moment in the music and serve to elevate the song to something more.  That can be a hard thing for a band to achieve, the "less is more" approach to guitar solos, but The Ditch and the Delta nail it. 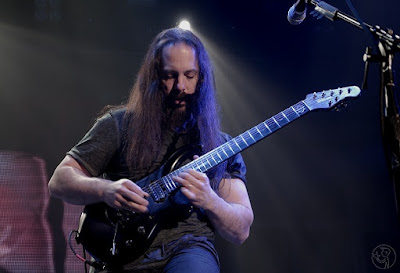 "Mud" opens with an incredibly foreboding swirl of guitars that sounds a lot more ominous than the rest of Hives in Decline, which makes for a nice change of pace before the big finale of "Dread Spectacle."  If "Mud" was the ominous premonition, "Dread Spectacle" is everything falling apart; the song opens with everything crashing amidst roars of "We found ruin" before segueing into the quietest part of the album, and the first instances of clean singing.  It's a disconcerting effect, and the darker shades of "Mud" and "Dread Spectacle" are like the thunderstorm at the end of the perfect summer day that was the first five tracks on Hives in Decline.  The shift from bright, almost poppy sludge riffs to the brooding, more misanthropic finale is well-executed, and gives Hives in Decline a great narrative feel, intentional or otherwise.

Thankfully for myself (and your imaginations!), my musical erection was indeed satisfied by Hives in Decline, though not in the way I was anticipating or expecting.  The math metal impact is slightly less than I anticipated, and it's certainly less gloomy sludge than Eagle Twin (which I only use as comparison because of Densley's solos and the groups' shared Utah home), but that doesn't matter in the end.  The Ditch and the Delta craft exceptional sludge metal featuring plenty of riffs, guitar solos, and grooves, all of which are super important for sludge metal, especially come summertime.  And Hives in Decline is a perfect album for summer, as it gives you plenty of moments to bang your head, zone out, crack a beer, or spark your bowl, all while sitting in the warm sunshine with your good friends and your best gal or guy.  Which is all the more impressive when you remember this is The Ditch and the Delta's debut album.  This trio is definitely one to keep an eye on, as Hives in Decline is one of the best albums of the year so far, well worth your attention (and your musical boner).

Hives in Decline is out May 12th on Battleground Records.  You can check out "Dread Spectacle" now over at Decibel.