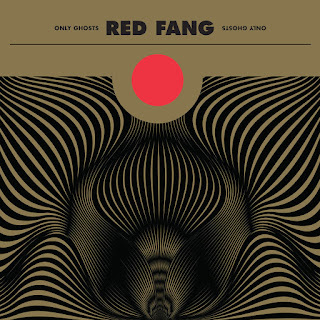 Since 2009, Red Fang has consistently put out some of the catchiest tunes in heavy music.  Blending thick, crunchy riffs with infectious, ear worm choruses in a high energy setting, Red Fang, Murder the Mountains, and Whales and Leeches have helped Red Fang carve themselves a distinct niche; in a stoner genre that often brings to mind hour-long songs and couch lock, Red Fang write songs that get you off of your ass and banging your head.  Their latest album Only Ghosts, does not deviate from this overarching formula, but tweaks it enough to keep things fresh while somehow upping the fun factor.

"Flies" begins with a lonely kick drum, before a southern drawl of a guitar lick comes in; before you know it, the band is exploding with full speed ahead, welcoming you to the next forty minutes of your life.  While not the best song on the album, "Flies" is the perfect opening track for Only Ghosts; if you like the cut of its jib, you'll probably be on board with the rest of the album.  It's the next track though that really gets the party started.

"Cut it Short" is definitely the album's standout track, with an addicting riff that must have been manufactured by Monsanto to accompany shaking your ass, or shotgunning a tall boy, or shaking your ass while shotgunning a tall boy.  I want to get married to the Durfette all over again so we can dance to this song at our second wedding, and I hate dancing.  I haven't been able to shut up and stop telling people about this song since I first heard it; I'm sure Mick is mildly annoyed with me by now, and he's got nothing on the random people I tell on train during my commute.  I can't get over how much I love "Cut it Short."  It's one of the poppiest, most fun songs I've ever heard, metal or otherwise.  I've listened to it a dozen times while writing this review.  I'm legitimately forcing myself to move on and talk about the rest of the album, because it's really good too, but I could easily just write "Holy shit 'Cut it Short' is so AWESOME!!!" in a myriad of ways for 600 words and call it a day. *deep breath*


After an early interlude track ("Flames"), "No Air" opens with a bass riff that drives the song throughout.  "No Air" is one of the darker songs on Only Ghosts, and when it slows down to a sludge-like crawl toward the end, the album definitely loses some of the energy and momentum it had been building... only to pick right back up for the finale.  "Shadows" definitely continues that upward tick in momentum, and has one of the best music videos I've seen to boot.  Matter of fact, "Shadows" and its music video are my new measuring stick for potential friends: if you don't like or at least appreciate one or both of  them, I'm not sure we should hang out.

I could go on and on, song by song about the rest of Only Ghosts, but if you've read up until now, or ever listened to an album by the band, you know what you're in for (though I will say "Not For You" and "Living in Lye" are highlights).  Red Fang's groovy brand of stoner hard rock has always been fun, but Only Ghosts kicks things up a notch.  This is an album that sounds like a debauched Midwestern summer; hot, sticky, and uproariously wild.  I want to grab a case of beer, roll some joints, and have Workaholics-style misadventures with Mick and Tom while this album plays on repeat, and then wake up the next morning and do it all over again. 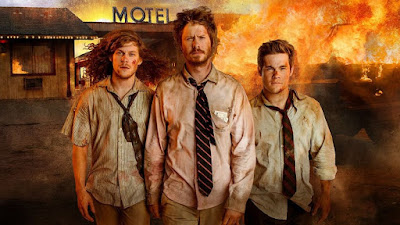 You can decide who's who, but Mick is definitely Ders

So often, when I think about the "best" metal, I think of long, drawn out, pensive tracks that revel in catharsis; you know, "Serious" music.  And I do love that shit.  But metal should also have room for fun, and this is where Red Fang shines.  Only Ghosts is the most fun album I've listened to all year (and "Cut it Short" the most fun track I've heard), and it serves as a testament that heavy music doesn't have to be solemn or forlorn to be astounding (even if I'm the only one who needs that reminder).  Highly recommended.