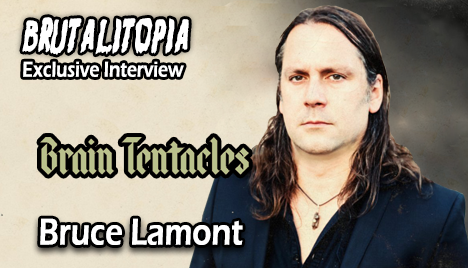 This past Saturday, Mick and I were fortunate enough to sit down with Bruce Lamont, he of many other bands but currently of Brain Tentacles. BT was in town on their tour with Intronaut and Gorguts that was passing through Chicago, and so over beers we took the opportunity to chat with Bruce about Brain Tentacles, his musical inspirations, songs he'd like to cover, how Luc Lemay is the nicest guy in the world, and many other things!  Check out our interview below!  Also be sure not to miss Brain Tentacles on tour with Gorguts and Intronaut; words do not do this show justice.

Mick: Bruce, you guys are on the road right now with Intronaut and Gorguts. Just overall, how's the tour been so far?

It's been fantastic. Every night has been a treat, a joy, and an eye-opening experience for us. We've had some great crowds and the response for us has been overwhelming. It's really cool and exciting.

Mick: We got the promo for your guys' debut album on Relapse. Usually, when we're preparing for interviews, it's fairly easy to have a go-to set of questions for bands based on what genre they fit in to. With you guys, though, it wasn't so easy. So what exactly was the impetus behind the band's off-the wall sound that's atypical for a Relapse band?

Having been in Yakuza, this isn't the first time I've played a saxophone in a heavier band. Dave approached me a couple years ago about doing a project together. I had done some saxophone work with him in the past. So the horn was something we were definitely going to utilize. I had started messing around with a different harmonizer and octave pedals in order to make the horn sound a little more menacing. So he and I just got into a practice space and just started throwing ideas at each other with no real intention or gameplan.

We had done a tour, just the two of us, in 2013 as Brain Tentacles opening for Melt Banana, which was a perfect audience for that kind of stuff. Along the way, we would have a guest bass player get up and play with us every night, and Aaron happened to be one of those guest bass players. The next day, I turned to Dave and was like "He's gotta be in the band", and that was it. We've all had tons of experience playing in other bands and we all have pretty varied tastes in music, so that all just came together. I mean, I know Relapse likes to call us "metallic jazz" or some shit but we're not a jazz band. There's nothing jazz about this at all. Just because there's a horn in it doesn't automatically make it jazz.

Durf: I just wanted to ask about the name "Brain Tentacles" because I think it's a genius band name. Where did that come from?

Dave just made it up. He told me "I've got this crazy name for a band" and I'm like "What is it?" "Brain Tentacles". Perfect. I asked him "what does it mean?" He said "I don't know" (laughs). Jef Whitehead did the ablum cover and did an amazing job. But when we trying to describe it to him, Dave said he always envisioned 20,000 Leagues Under the Sea where the tentacles are pulling the ship down but there's also this giant brain down there pulsating. And Jef just nailed it.

Durf: The album's been out for about a week now. How do you feel the reception has been?

It's been great in the sense that there's no grey area. People either love the shit out of it or they fucking hate it. But either way, we're totally cool with it. Seriously love it.  As opposed to hearing "Oh this band is blah blah blah", I love hearing either "This band irritates the shit out of me" or "Oh god fucking dammit this is cool". Either way it's intense passion.

Durf: I aplogize because I'm terrible with track names, but I annoy the shit out of my wife with that song that starts with "ni ni ni nah, ni nah ni nah" ("Fruit Cake") but I love doing it because of how much fun it is.

That's funny because that's the drummer from Keelhaul's voice. We were just screwing around in rehearsal about a year and a half ago and I had that audio and played it for everyone. And then I started playing that riff and the song was born. We played Cleveland the other night and I dedicated the song to him. He also notoriously calls everybody "fruitcake" too; such an old man term (laughs).

Mick: I know you said earlier that there weren't any direct influences with bands for Brain Tentacles' music, but with the heavy saxophone sections I couldn't help but think of early King Crimson material. Was there really never any "I want to kind of sound like this" in the back of your guys' minds at all or was it really just a free-flowing thing?

Yeah, with the overall end result of the songs there was intention at all. With the horn stuff I was trying to figure out a way to be really menacing and give it some teeth. On that first tour run we did, my intention was blow up power amps and stuff like that. Most sound guys would snicker and be like "oh what's this guy gonna do"? So I would tell them during sound checks what to do and scare them with a loud quick note and would be like "See I'm not fucking around here" (laughs).

Durf: You're bringing respect back to the saxophone.

(laughs) Yeah, especially after what Davin Sanborn and Kenny G did to it (laughs).

I recently had another interview where I was poking at them because I was asked about when I started playing the horn. I started playing in the 80s when I was a kid but there was no one to look to. Zero. Well, Clarence Clemons but that was it. That was the only guy. But I had no idea who Coltrane or Ornette Coleman was at the time and I don't know if I would have even gotten it as a teenager. But all that was happening was guys like Dave Koz and Sanborn and Michael Brecker and these other cheese balls. Gross.

Durf: Since you guys are a different band for Relapse. They also have this band called Survive that's more electronica/synthwave. That style is also starting to fall under the "metal umbrella". Since you've been around the scene for a while, would you say it's a good, bad, or indifferent thing that this umbrella is starting to encompass more unusual styles?

Always a wonderful thing. Earlier Relapse was like that too. They had their experimental label that was more open to things that was outside of what was definitively metal. And then they got away from that for a little while and now they're back to that again. But I mean heavy's heavy. Who cares? May as well get creative.

Growing up I was a total death metal kid. I started to see the limitations on what you could do creatively. I remember very vividly when I was working at a record store in 1989, I was at a Kreator show. And I love Kreator, don't get me wrong, but I remember thinking "There's got to be more than this". And within three months of that, I was going to see a bands like the Smitereens, the Pixies, and the Cure. That really showed me that there was a whole other world of music out there to be open to.

Mick: Did Gorguts happen to be one of those early death metal bands for you?

Oh are you kidding me?! I mean, Luc's insane. The fact that he gravitated towards Colin and Kevin when he did is so cool. Colin and Kevin I have been friends for a long time and I remember when Kevin called me up. He was like "Hey man, Luc is starting Gorguts back up again and he wants Colin and I in the band". I go "Well yeah no shit he does. You guys are perfect for it". The first time I saw them together was crazy. It was beyond ridiculous. There wasn't anyway it wasn't going to be....but still.

Well the record just came out, but we have some other songs that we didn't use on the record. Plus writing has been a pretty quick and easy process for us.

Mick: How does the writing process work for you guys? I know bands can be pretty particular about when and how they write.

Geographically, we're live in three different locations. I'm here (Chicago), Aaron's in Cleveland and Dave's in Richmond. We'll meet in one of those three spots and just hole ourselves up for a couple days and write. We've discussed maybe trying to Skype stuff. We're not afraid of technology, but at the same time I've never done it that way before. Cleveland and Richmond aren't that far away either.

Mick: We like to end interviews on a fun question. So if Brain Tentacles, on their next album, had to cover a song, what one would it be?

Well we have covered "Innocence and Wrath" by Celtic Frost, that intro track to To Mega Therion. It was actually on a split 7" we did with Ringworm where they did a Venom track. But the other night I was actually playing the Darth Vader theme song in Star Wars. I'm not huge into Star Wars, but we went with it and Dave came on the mic and went "YOU FUCKING NERDS!" Out of nowhere, we also got asked to do a song for a Samhain comp. I have no idea what it's gonna sound like or how we're going to approach it but that might happen. But off the top of my head, I can't think of anything else.

Durf: Not a Brain Tentacles version of Careless Whisper?

(sighs) I've played that before. That was like a sound check joke in the early 2000s. That and the theme for Entertainment Tonight. Now that I think of it, it might be cool to do an early Primus cover. I mean if we could open for them, that would be an ideal pairing. Since Rush is gone, there's no other bands to aspire to play with, trio-wise (laughs).

Mick: Thanks so much for the interview, Bruce.

Posted by Brutalitopia at 8:37 AM