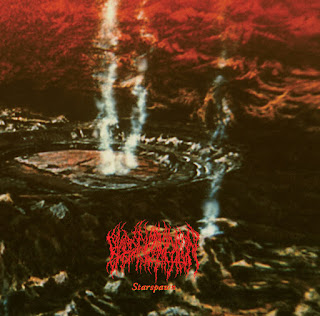 Death metal and the cosmos; not a common thought, considering the roots of the genre of the music. When you think of full fledged death metal in an experimental environment you might think of the now defunct Morbus Chron and their sublime Sweven. Maybe you fancy the cosmic orations of Inquisition? Somewhere in between is where Starspawn; the latest from Blood Incantation (their debut full length) lies and it is a wonder to listen to.


Five fully fleshed out songs of progressive death metal, in the vein of Death's Human (among others), becoming more and more abstract as the album rolls along. The 35 minute running time removes the chore so many albums create on follow up listens and allows you to really immerse yourself in some incredibly dynamic and dense heavy music. This Colorado based collective really put themselves on the map with their Interdimensional Extinction EP last year and have upped the ante significantly in a short amount of time.

From the very beginning of "Vitrification of Blood" you are enveloped in the aura of the cosmos; the riffing on here reminds me of many other bands in the genre, but much more expansive. Woven into this song are passages of pure heaviness. You don't get guitar solos of that quality on just any death metal album. The ending of this track is a dirge into the beauty that is extreme metal; a trip into the oblivion that is space, feeling lonely and realizing that you are truly alone.

Paul Riedl's vocals truly come from the pits of hell and swirl within the maelstrom of the music it accompanies. Much like labelmates Horrendous; Blood Incantation humbly blend the heaviest sections of Demilich with classic sections of some of the most melodic bands out their and this vile concoction is not to be taken lightly. The 2:55 mark on "Hidden Species" is frightening; before the vocals kick back in you are given a dissonant riff that seemingly appears from out of nowhere and leaves you uneasy, until the music comes back in.

The album is dialed back significantly with "Meticulous Soul Devourment", going acoustic but keeping with the space theme of the album; enter the title track and final one and the album ends with some aplomb. This is another evolution (or is it a mutation?) for death metal as a whole; Take a blender and mix ample amounts of Inquisition, Demilich, Incantation, Death, Morbus Chron, and Crack The Skye-era Mastodon and the end result is Starspawn. A must own album in the death metal lexicon for years to come.

Also buy this, because we know you like to stand out! 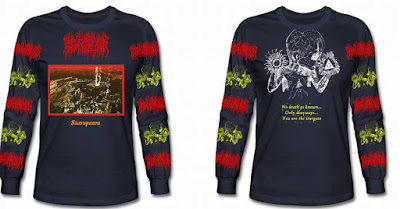