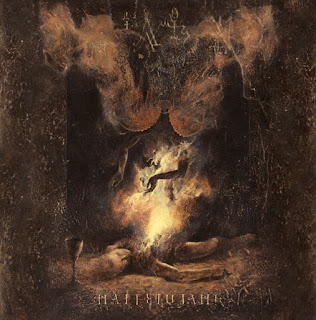 "Atmospheric" is the variety of black metal that I tend to enjoy most. "Regular" black metal, while I certainly appreciate its history and evolution, has admittedly never been something I would consider a part of my wheelhouse. Perhaps it's been so instilled in me that black metal, at its core, HAS to be comprised of lo-quality instrumental recordings and shrieking, throaty vocal screams that anything else that ventures too far outside that box would come across as illegitimate. Lo and behold, it took just one listen of Canadian black metal duo Gevurah's full-length debut, Hallelujah!, for me to realize how ridiculous a preconceived notion that really was. By reinforcing black metal tenets with immense amounts of energy and volume, Gevurah has made an indelible entrance into the metal limelight, one that is easily among this year's most memorable so far.

"The Fire Dwelling Within" ushers in the album with a spot-on aural representation of the album's cover art. Layered voices whisper over the sound of a crackling fire in an almost ritualistic nature, priming your psyche for the unrelenting onslaught that is soon to come. Once that first scream bellows through the lingering guitars, Hallelujah! is off to the races. Vocalist X.T. lashes out with a procession of raspy, but not quite screamed, laments that intertwine with the instrumentation's ferocity in a way that is truly too perfect for words. The vocal's cadence bring to mind what Venom would sound like if they were much deeper and more brooding. Meanwhile, the guitar riffs and drum rhythms continue to weave from track to track in an unrelenting, yet well calculated fashion.

From front to back, Hallelujah!'s greatest strength lies in its pacing. Whether it's "Un Feu Indomptable" transitioning from the unwavering drive of the first two tracks into a riff-entrancing dirge, or the album's sole instrumental track, "Lifting the Veils of Da'at", acting as a comparatively calm halfway point, Gevurah's album crafting chops are made staggeringly clear. The album's true payoff, however, comes with the last two tracks, "Dies Irae - Lacrimosa" and "הַלְּלוּיָהּ"; both tracks encompass all the album's best features, and then some. "Dies" is a ten and a half minute amalgam of perpetually grinding guitars and drums all overlayed with a riff that acts as the track's spiritual resolve. It's a track that constantly builds upon itself so much that we can only assume the impossibility of closing with anything more satisfying. "הַלְּלוּיָהּ", proves us horribly wrong, fortunately. It's mind-boggling to think that a single riff, and slight variations thereof, could fuel a 20 minute album closer, but Gevurah but can't resist but astound us one last time. Peaks and valleys of tempo are traversed before a chorus of Gregorian-like chants fade in with about six and a half minutes left. While I would've been content with the album ending on this note, one last outburst of blasting guitars and drumbeats abruptly enters and continues looping back and forth; ending the album at a point where you neck is at the point of snapping from headbanging so goddamned much.

What Gevurah has accomplished with Hallelujah! is nothing short of phenomenal. They've taken the rawness of traditional black metal and have made it more palpable, even anthemic. What's more impressive is that an album such as this, that is solely propped up on a formula that would sound generic on paper, has stood out even more than other releases from other black metal genres that have derived and supposedly "evolved" from this formula. Hallelujah indeed.