Things are finally, slowly starting to open back up after fifteen months of pandemic (I know, it feels like fifteen years).  The Durfette and I went golfing with her dad and his girlfriend when they were in town, and then we went to a local restaurant, sat on the patio, and had a glass of wine.  I went into the coffee shop that I stop in after grocery shopping, and didn't wear a mask as I picked up my americano to go.  We had friends over - in person - for a barbecue.  Major league sports are operating with full crowds, which may not be the best example, because they would have done that all last year if local governments hadn't forced them to put safety above profit.  We still have a ways to go (and it would certainly help if everyone got on board), but for now things are certainly trending back toward normalcy.  And the icing on that long-delayed cake has been trickling out of the baker's bag for the past couple of weeks: real, in-person, honest to Dio concert announcements.

Off the top of my head, without looking, I know Red Fang, Gojira, Black Tusk, Between the Buried and Me, The Obsessed, Inter Arma, and Foo Fighters have shows lined up for later this year.  My Instagram account is littered with festival lineups and announcements.  It's incredibly exciting and refreshing to see.  Now, as usual, most of these tours are skipping Boise, which wouldn't be so bad if the bands didn't give themselves two days to get from Salt Lake City to Seattle.  That open date literally screams "HAHAHAHA FUCK YOU!!!!!" at me every time I see it.  I have a ticket for BTBAM's Anniversary/Great Misdirect tour's Salt Lake City show, but when that tour was originally scheduled, that show was on a Saturday and I only had one Durfling; now it's on a Wednesday and I have two, so that's probably out.  Gojira and Red Fang are coming to Boise, however, which is awesome; it also presents me with another issue: as excited as I am to see concerts resuming, as happy as I am that life seems to be moving out of the dead stop its come to, I'm not entirely sure that I'm ready to be jammed into a concert venue elbow to elbow with a bunch of sweaty strangers.  Which is 100% on me, and I'm sure will pass in time.  Gojira is in town in September, and Red Fang in November, so that gives me three to five months to get comfortable with the idea.  Because I miss live music.  I miss the shows, I miss the camaraderie with other fans, I miss skipping the headliner because you're talking to the bassist from the opener that blew you away.  In the grand scheme of things, I know that getting concerts back is pretty small potatoes, but goddamn the world is a better place with them. 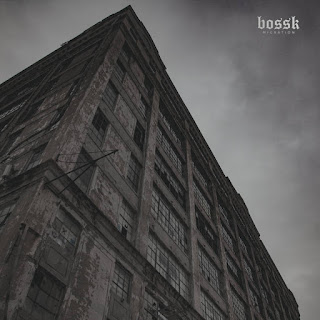 I first stumbled onto Bossk way back in the day while listening to, like, an Isis Pandora station (Remember Pandora?  Is Pandora still a thing?).  Their EPs .1 and .2 blew me away, and I remember wanting to hear more, and then they just sort of went away, which made me a sad Durf.  So imagine my surprise and delight in 2016 when they released Audio Noir, which landed on my Töp Albums of the Year list.  The band's post-metal soundscapes are right up my alley, and obviously any new material from them is must-listen, so when Migration showed up in our inbox, I was instantly excited.  Migration does nothing to dispel that excitement either; Bossk is fired up and raring to go, and they absolutely crush it, delivering a complete album of intense post-metal that lives up to the greats of the genre; "Menhir" sounds like it could be a Cult of Luna song, and I mean that as a massive compliment. (Ed. Note: Could it possibly sound like a Cult of Luna song because Johannes Persson, vocalist for said Cult of Luna, is on this track?  God you're a hack)  And I mean, obviously that's a compliment; if you think a Cult of Luna comparison isn't a massive compliment, then I'm not entirely sure what to say.  Migration comes out on Deathwish next Friday, June 18th. 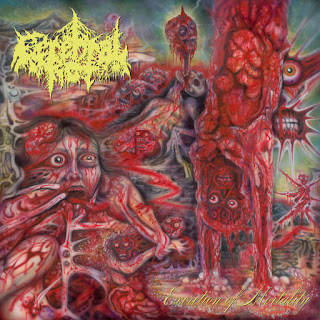 Color me guilty of judging a book by its cover; looking at the cover art for Excretion of Mortality, I assumed I'd be listening to something like Gruesome, just complete OSDM worship.  So when the low end kicked in and the bass fired up, I was intrigued.  Cerebral Rot traffic in kick-ass death metal that bludgeons you over the head (without being "brutal") and throws in a fantastic amount and array of riffs that call to mind all eras of death metal.  Which is great, because honestly?  I'm over the OSDM redux.  Maybe it's because I got into extreme metal via black metal?  Maybe I was hugged too much as a child?  Whatever the reason, nothing makes me say "Nah, pass" to an album faster than seeing those four letters smushed together like the bottom Egg McMuffin in a sack of thirty getting passed around a jobsite.  Anyway, that's probably a personal problem, and it's also irrelevant, because like I said, Cerebral Rot forges their own path instead of trying to re-live the past.  Feel like I really went off the rails here, which either illustrates my obvious need for an editor or is a perfect analogue for Excretion of Mortality.  Which comes out in two Fridays (June 25th) on 20 Buck Spin. 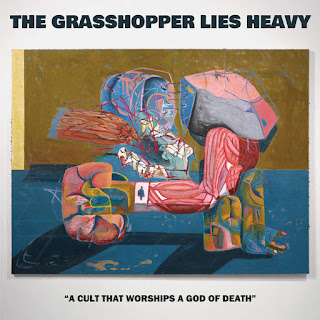 "I'm sorry, what's that?" That was my exact quote, said out loud, when I saw a band named The Grasshopper Lies Heavy show up in the Töp inbox.  It's not so much a terrible band name as it is a band name that seems questionable at first glance and then grows on you until it consumes your entire being and you start wondering why all bands aren't named The Grasshopper Lies Heavy.  A Cult That Worships the God of Death, however, is a straight up ballin' album title, and the music it contains lives up that impressive title.  The Grasshopper Lies Heavy bring a ballin' mix of sludgy, doomy, post-everything noise that is incredibly immersive for such relatively short song lengths for most of the album.  The outlier is the title track, "A Cult That Worships A God of Death, Parts I-IV," which is a nearly nine minute opus that brings to mind Mouth of the Architect.  I'm really leaning into comparisons to post-metal deities this week, but if the heavy, melodic shoe fits, right?  A Cult that Worships A God of Death will be out July 16th on Learning Curve Records. 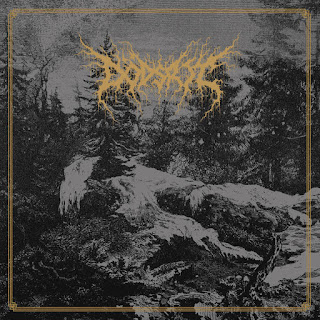 Well this was an incredibly welcome surprise!  Sitting at the kitchen table, drinking my pre-workout coffee, with nothing queued up to listen to, I started randomly scrolling through metal Bandcamp when Mortal Coil caught my eye.  Dödsrit dabbles in a proprietary blend of black metal that is both instantly recognizable and distinctly unique; as I put it while talking to my friend and former Brutalitopian Jack, "it somehow manages to encapsulate everything I love from all the disparate reaches of black metal into like forty minutes," which is an assessment I stand by.  Or, if you prefer a little more detail (and some comparisons that are a little better than mine, since we're doing Comparison Week today), it's like Jack replied: "It’s like if you tossed the following all into a blender and it came out homogenous: Gojira’s emotion driven chord progressions, At The Gates' use of dual lead harmonics, Martydöd-ian crust/d beat passages and Solstafir grooves."  However you want to look at it, Mortal Coil is an incredible album, another release that seems destined to end up on a lot of year end lists this coming December.  Mortal Coil came out May 28th via Wolves of Hades, and you should seriously go listen to it now. 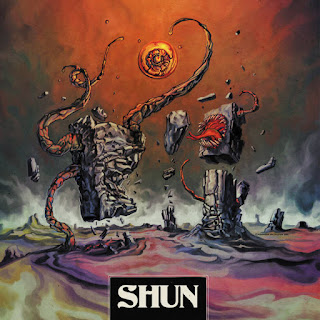 Sometimes some good ol' rock just hits the spot.  Shun is a new band out of North Carolina, and their eponymous debut album is a terrific cacophony of what makes metal-adjacent rock awesome.  Are there big riffs?  You know there are.  Is there just enough fuzz to give it that "Huh, this is like if Matt Pike wrote a song trying to get radio play?"  Oh yeah, in spades.  Are there a lot of Clutch-like blues licks?  Well, no, and if you've read this far you know I'd love to just keep making comparisons, but that one just doesn't fit here.  Other than the fact that Shun is great, and Clutch is also great.  But that's pretty weak, even for me.  Shun is a dynamic mix of sounds and tempos, led by the incredible range of vocalists Matt Whitehead and Scott Brandon, who manage to bellow forcefully and croon almost soulfully across the album's runtime.  This is really, really good stuff that I think you'll dig; if you're into Elder at all, check these guys out.  There, one last comparison.  May have hit those harder than the weights this week.  Shun came out June 4th via Smallstone Recordings, who is really killing it with the releases this year.

That's it for the week; hope you all had some great workouts soundtracked by killer jams as well.  Looking back, this was a really strong week, music-wise.  Always nice when that happens.  I did a quick look, and I didn't see any previous DWW albums that come out today, so if this is your favorite part of the post... sorry.  See you all next week.