Something that I've been asked at least once is how do I manage to work out most every day during the week.  I'm a concrete forms carpenter, and it's a job that can be more than a little physically demanding, an eight to ten hour workout in its own right.  Then there's a family, dogs, chores and work to do around the house... life really seems exhausting when you write it all down.  So what's my secret, what heretofore undiscovered methods do I utilize to keep myself motivated, energized, and ready for the day?I am in no way embarrassed to tell you that I am in bed by 8pm every night.  And by 8pm, I really mean that I'm asleep by 8pm, because I'm in bed closer to 7:30 and an episode of Schitt's Creek takes about 22 minutes and then it's lights out for this guy.  When I first started getting up at 3 to lift, I was staying up until 9 or 10, and it was working out ok.  Not great, mind you; there were far more weeks with one or two skipped workouts than none.  The first time I got in bed before 8, I thought it was just a freak occurrence, but the next day I felt amazing.  So I did it again, and then again, and now it's a habit.  Now I'm turning off a boring Super Bowl with 13 minutes left to get some z's.  It's 7:04pm as I'm typing this, and I'm asking myself how much I need to get done before I can book my first class ticket to dream land.  And I love it.

I've always known that I'm a morning person, but it wasn't until very recently that I put together the other side of that equation: getting up early requires going to bed early.  I guess everyone has their own rhythm of when they function best awake and sleep best, and it seems like it's pretty important to figure yours out and then try and work with it the best you can.  I already know when this baby comes it's going to seriously mess with my routine, and I'm trying very hard not to resent him for it.  But until that day comes, and then eventually when that baby figures out how awesome a whole night's sleep is, I'm gonna keep going to bed before the sun is technically "down." 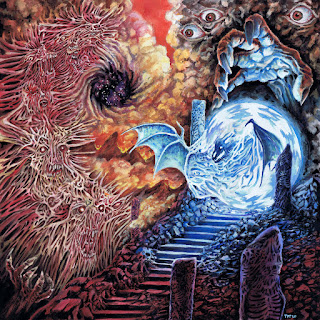 So today my combined HIIT Cardio and weight lifting time was 82 minutes and 15 seconds.  I tell you this not to brag or try to impress you (and honestly, nothing should impress you more than this column running FIVE weeks in a row), but to set you up for the fact that during that time I listened to the new Gatecreeper EP four and a half times.  An Unexpected Reality is a crazy good, super breezy 17-minute romp that features six blink-and-you'll-miss-them tracks and one eleven minute-genre-spanning epic.  I know that's a lot of hyphens, but An Unexpected Reality earns every single one of them (there's something I never thought I'd say about an album).  Gatecreeper have been riding their blend of blackened death metal for awhile now, to great aplomb, and album closer "Emptiness" is a fantastic change of pace and I for one am really excited to see if Gatecreeper continues down that path or if it's just a killer one-off.  Either way, you can listen to An Unexpected Reality now. 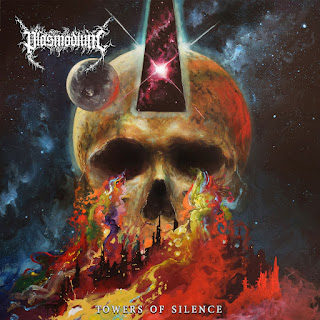 I was thinking about it, and after my dual listens of Turris Eburnea and Black Hole Deity, not to mention my adoration for Suffering Hour's The Cyclic Reckoning, I guess I'm all-in on this cosmic death metal.  A lil' cosmi boi, as my pal Nick might put it.  Which brings me to Plasmodium's Towers of Silence, which is perhaps the most cosmic of all cosmic death/black jams.  For a genre that celebrates space, few albums sound as truly alien as Towers of Silence; there's something about it that at times genuinely seems unsettlingly inhuman.  Similarly, the album is simultaneously primitive and futuristic; in one moment it is realizing it can use a bone as a weapon, and the next it is being hurtled through vast distances of space time while orbiting Jupiter.  While a solid workout soundtrack, Towers of Silence is clearly an album that demands more intensive listening, and I look forward to doing just that.  Transcending Obscurity is releasing Towers of Silence on April 30th. 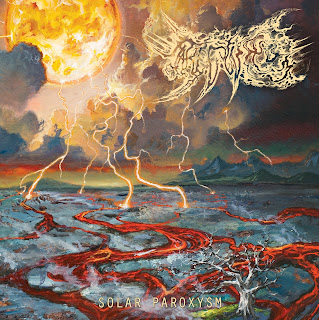 Well a cosmi boi I am indeed it seems!  I really didn't set out to listen to multiple cosmic death/black metal albums this week, but when a Mare Cognitum promo hits the inbox, what else am I supposed to do?!  Solar Paroxysm finds Mare Cognitum "moving from the impossible to the familiar," according to the press release, and there is a definite feeling of a more earthbound, gravity-enhanced feeling to the proceedings this time around.  There has always been an ethereal, cosmic(!) quality to Mare Cognitum's work, and while Solar Paroxysm doesn't drop that entirely, there's a lot more heft to the music, and the ambiance and atmosphere take a back seat to some serious riffing.  While I admittedly only discovered Mare Cognitum last year on the back of their (wonderful) collab/split album with Spectral Lore, having subsequently listened to their discography, I feel qualified to say that despite a more grounded sound, Solar Paroxysm finds the band reaching new stratospheric heights.  Solar Paroxysm is out via I, Voidhanger Records on March 19th, and I really can't recommend it highly enough.

Werewolves - What A Time To Be Alive 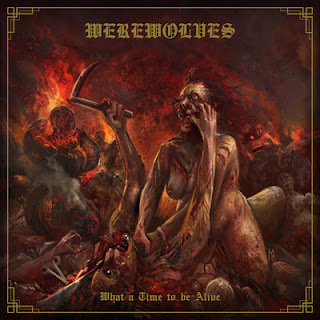 Ok, now this is power lifting music!  Werewolves make aggressive, pulverizing black/death metal that is designed to get your blood pumping and your adrenaline spiking.  Or, as the band themselves put it:

"Look at what you made us do.  We could have released our debut and rode off into the sunset a year ago, but there you all were, hashtagging each other, yelling at each other, sneezing on each other, you worthless sack of assholes.  We simply cannot - WILL NOT - contain our loathing for everyone, and because dropping a bomb on all you pricks is against the law we've released What A Time To Be Alive instead.  Buy our album and give us your money or we'll kick in your front fucking door and play our music at you."

I've read a lot of comments by a lot of bands and this is easily the best one, both in terms of words and in terms of letting you know exactly what the fuck the music is going to sound like.  What A Time To Be Alive is an absolute monster statement of an album, and undoubtedly the best workout music I've encountered in this endeavor.  Also, I'm pretty sure "Traitors and Bastards" contains the lyric "...you useless sack of wank," which is objectively a hilarious thing to hear in a death metal song.  What A Time To Be Alive is out now, and you should absolutely get on it.

Cult of Luna - The Raging River 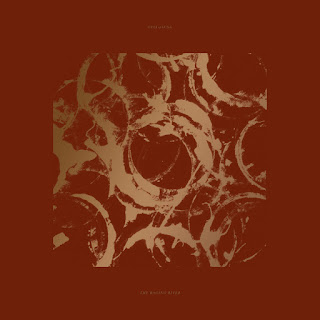 Cult of Luna doesn't make bad music; all of their releases exist on the spectrum of very good to great.  The Raging River, the band's new 40-minute EP(!) doesn't quite reach the highs of Vertikal or Mariner, but the relatively streamlined runtime gives the EP(!!) a sense of excitement and urgency that I felt was lacking on A Dawn to Fear, the band's last (still very good) full-length.  True, "Inside of a Dream," the more languid track featuring Mark Lanegan on vocals, isn't the best lifting music you can think of, and your take on working out to The Raging River is definitely going to depend on your thoughts on post-metal, but Cult of Luna have added another terrific album to a discography full of terrific albums.  The Raging River is out now; go listen to it.

Hope everyone had a great week lifting; see you back here next week.