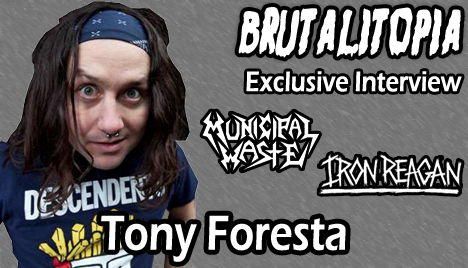 I interviewed Tony Foresta (Iron Reagan/Municipal Waste) and we talked about Iron Reagan's new album Tyranny of Will, Oderus Urungus, GwarBQ, politics, touring in NJ, and celebrity deaths. All in all, it was a fun time had by all.

I hope you enjoy our rambling down below after the break.

Tom: I'm on the line with Tony Foresta from Iron Reagan and Municipal.  Tony, how ya doin' this afternoon?

Tom:  Hey we all have things to do.  But you know what?  Get the interviews done and everything's hunky-dory and all that kind of good bullshit.

Tom:  So The Tyranny of Will is coming down the pike here.  What are you guys doing as Iron Reagan in preparation for that release?

Tony:  We're just starting to plan some tours for next month...or actually for the next month after.  We just got back from touring a couple days ago and filmed a music video that we're really stoked on.  We filmed with that guy Whitey who worked on all the Red Fang music videos.  I don't know if you've seen those.

Tom:  You talkin' about the ones with the beer cans and all that stuff?

Tony:  Yeah.  We went and filmed there.  That was a really crazy video shoot.  Then we came home and took a little break.  We did a few shows last week....goin' up to Detroit and back.  We played GwarBQ the week before so we're just trying to take a little break before we hit the road for the new album next month...or October I guess.  We're still figuring it out (laughs).

Tom:  That was actually something I was going to bring up.  I know that you guys had played GwarBQ and that you and Dave Brockie were both from Richmond.  I was wondering about your thoughts on his passing and what is was like to play GwarBQ in his absence.

Tony:  Yeah he was a good friend of mine.  It was a tough blow to a lot of us here.  Real life just kinda set in for us.  GwarBQ was really a farewell to all the people before us.  It was more of a celebration of his life.  We had a great time.  It was a good way to see him off, ya know?  I think a lot of the people there were there to have a good time in his honor.  It was really cool to see and was really great to be a part of.

Tom:  Yeah just a little something about me that involves both you guys and Gwar: I unfortunately never did get to see Gwar live when he was around but my wife was really big on the movie Empire Records.  She also got me Scumdogs for Christman the first year I dated her.  We also almost went to see you guys...I think it was Iron Reagan and Gwar down at the Starland Ballroom in Sayerville, New Jersey.

Tony:  Yeah that was a great show.  Hatebreed played that as well.  I'll never forget that one.

Tom:  I also saw you guys at a smaller place; kind of an interesting show at this place called the Irish in Kearny, New Jersey.  That was bizarre.

Tony:  In Kearny....yeah, was that an Iron Reagan show?

Tom:  No that was Waste, but I'm sayin' it was an odd place; kind of like a knights of columbus type of place to see you guys play.  Kinda funny.

Tony:  Oh yeah yeah I remember that show.  Gutter Christ was going on there.  That was a good time.  I love playin' up in New Jersey.  Actually, Municipal Waste is gonna play in New Jersey in a few weeks.

Tom:  Yeah I have a wedding that day; trust me I looked into it already. It's just not gonna work.

Tony:  It's with Overkill and Prong.  Should be crazy.

Tom:  I've been meaning to check out Overkill since they put out their last couple albums.  I haven't seen them play since their 25th anniversary show that was several years ago.

Tom:  So I'm lookin' at the album art (for The Tyranny of Will) and I'm seeing a very beat-up and defaced Rudy Giuliani.  Just curious as to what the drive was for that (laughs).

Tony:   Well we have a lot of Reagan imagery on our albums so we kinda probed the artist to go with something else. Reagan's kinda ugly anyway. I know that most of the records that we did had his face on it anyway .  So she decided to go with Giuliani on the cover.  Yeah she's a crazy artist.  She came up with some crazy shit for this one.

Tom:  I'm gonna have to pick the album up since I've only seen the outside.  Sounds like the inside would be pretty hilarious.

Tom:  Like when the Dead Kennedys did that Frankenchrist album with all the dicks on the inside.  You trying to one-up those guys a little bit?

Tony:  Oh that Frankenchrist Geiger painting.  That got banned actually.  It's a really rare piece.  If you get your hands on that painting, that's worth some money.

Tom:  I guess you have to be the best of the best to get yourself banned, but I'm not sure that was the objective this time.

Tony:  Oh we try.  We're working hard to get banned.

Tom:  Talking about Reagan, I had a friend of mine who was very interested in having a question of his answered by you specifically as Iron Reagan and not Municipal Waste.  He wondered if you thought Ronald Reagan was justified in selling weapons to Iran.

Tony:  (laughs) He was selling them to the Taliban wasn't he?

Tom:  Yeah I believe so.

Tony:  You know, it's funny.  If you watch the end of Rambo 4, they thank the Taliban.  The movie's dedicated to the Taliban and Afghanistan.

Tom:  John Rambo must've been on some serious drugs.

Tony:  I'm dead serious.  If you watch the closing of the movie, this film's dedicated to the Taliban.  It was really wild.  It's weird how things switch around (laughs).

Tom:  Life's fucked up that way.  Anyway, now that I've listened to The Tyranny of Will a couple of times, it seems like a great connection to bands like D.R.I. and early COC and maybe even Cryptic Slaughter?

Tom:  Awesome.  But yeah, you guys did a bang-up job on the new album as a follow up to the debut.  Even when you guys did the split with Exhumed earlier this year, it was just another thing I needed to hear from you guys.

Tony:  Yeah the EP is really fast.  We got to let the songs breathe a little more on the full album.  But the EP was relentless and ended up being one my favorite things I've recorded.

Tom:  Just to stay up on current news.....thoughts on Joan Rivers?

Tony:  I just found out about that like ten minutes ago.  I think it's a bummer.  She was brilliant; really, really funny.  She was one of the first dirty female comedians.  She almost hosted the Tonight Show after Johnny Carson which is crazy to think about.  But she was a badass.  When she actually did stand-up she was really funny and smart.

Tom:  Yeah it's a sad day.  But like you said about Oderus, it's more about celebrating the things they did do as opposed to mourning about what they won't be able to do anymore.

Tony:  Right.  Well Robin Williams is another one.  It's pretty shocking, but it's just a sign of us getting older and it's just gonna keep happening (chuckles).

Tom:  Well in closing here, do you have anything more to say about the album or tours or anything like that?

Tony:  Keep an eye out for tour dates.  We're going to be posting those online as soon as we can.  Haven't gotten around to it quite yet but stuff is happening.  Also keep an eye out for our new video.  It's gonna be a fun one.

Tom:  Well Tony, we look forward to hearing more from you again in the future.

Tony:  Thanks for the phoner, man.  Appreciate it.