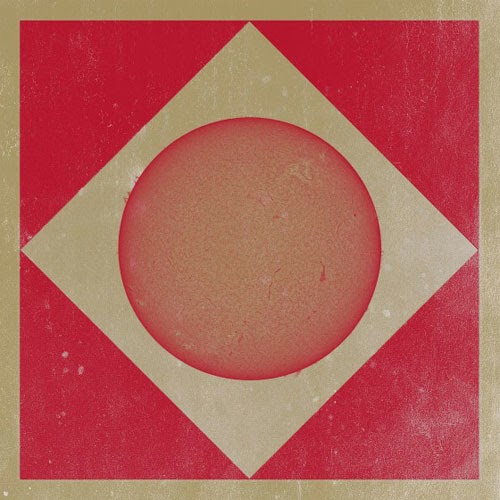 Full-on band collaborations seem to be a rarity in extreme music these days.  Splits don't count, as typically those aren't collaborations but merely each band releasing their material on one side of an album.  Sometimes you'll see lone musicians combine talents, like Steven Wilson and Mikael Akerfeldt's Storm Corrosion, or a vocalist will embark upon a different project with other musicians, like Chino Moreno of Deftones joining Isis (R.I.P.) for Palms, but rarely do you see the full creative process of two bands working together to create something unique.  So it was definitely exciting when late last year I caught word of a long-gestating project between mysterious drone titans Sunn O))) and chameleonic metal band Ulver.  Sunn O))) has long been a favorite of mine for their intense, suffocatingly oppresive ambience, and while I'm not as familiar with Ulver, I knew that they were a band that began with a black metal album before moving through genres and mixing things up, never content to stagnate.  Two bands that place full emphasis on creating music that appeals to them, with seemingly little to no regard for commercial or critical success, working together... why yes please, I WOULD like to listen to that!  Terrestrials, the album that resulted from the bands' collaboration, is a breathtakingly dense album that is content to move glacially for most of it's thirty-five minute runtime, but when it opens up, it rewards the listeners who traversed the audio fog.

Terrestrials begins with "Let There Be Light," a droning, slow-building song that doesn't twist or turn; instead it's content to simply plow straight ahead, the walls of distortion and trumpets creating notes that linger, longer and longer still, until the next begins.  At nearly twelve minutes, it can appear to be a daunting listen, but the soundscape is so inherently captivating, so moving, that it flies by.  When the notes begin to fade around the eight minute mark, the sense of anticipation is very nearly palpable; what you've been waiting for is the thundering arrival of the drums that appear, as though you've been waiting specifically for them, listening to the rest of the track with the knowledge that they would arrive.  The remainder of the song pummels along nicely, giving "Let There Be Light" an overwhelming sense of hope, a feeling of waiting through a dark night in a forrest with wolves, eagerly awaiting the first ray of the morning sun.

"Western Horn" quickly dispells any misguided notion of hope or happiness, as it's leading bass rumble fills the listener instantly with trepidation. The song builds into a higher pitched drone through which assorted notes and sounds occasionally pierce through, although they come and go seemingly at random, breaking through the drone and then disappearing again into the mist.  By the time the tremolo-plucked strings appear to close out the album, the trepidation has evolved into a dread so intense you're begging for the scare that never comes; "Western Horn" slowly fades out into silence, leaving the listener to cope with their feelings and trying to remember to breathe.

The album's highlight is closing track "Eternal Return."  Where "Let There Be Light" and "Western Horn" are slow movers built on walls of distorted drone, "Eternal Return" begins with snthesizers and violin.  The instruments are still a bit fuzzed out and the ambient drone is still present, but there's a much clearer feel of song, a melody to follow that feels very psychadelic in nature.  Psychadelic and sad, mind you; "Eternal Return" is one of the most hauntingly beautiful, harrowingly depressing pieces of music I've heard.  It's like a slow moving thunderstorm of untold misery, with a subtle bass roll tying the synthesizer and violin even more perfectly together.  Eventually the storm breaks, and the synthesized notes become shorter and more songlike, at which point  Ulver frontman Kristoffer Rygg gives the album its first vocals.  Yet the break does not alleviate the sadness, but intensify it, giving voice to a sense of woe that was until now wordless.  There are only a few lines of lyrics, but Rygg manages to impugn each word with a sense of purpose; he knows he doesn't have to say much.  Moving between a soft, almost spoken word delivery and a tormented cry, his voice over the synthesizers and bass create the antithesis of "Let There Be Light's" finale; where the first track on the album offered hope, "Eternal Return closes the album with the listener cloaked once again in darkness and sorrow, albeit an utterly gorgeous sorrow.

All told, Terrestrials is a stunning achievement, rewarding dedicated listeners with a lush soundscape on which to project their daydreams.  It's an album that's cinematic in scope, and not in a way that suggests it could be on in the background of the next PT Anderson flick; it's an album that's as compelling as watching a goddamned movie.  Sunn O))) and Ulver have created an audio journey through light, darkness, hope, fear, exhileration, exuberence, and more; Terrestrials is an album that invites you to feel it as much as you listen to it, over and over and over again.  Every time I've listened I've picked up something new, and I anticipate that will continue for the forseeable future.  It's not an album to put on while cooking dinner, or to listen to in the background; Terrestrials demands your full attention while listening.  It's an album that transcends not only genre boundaries but the very idea of music itself, and is mandatory listening for anyone who's ever put on a pair of headphones, pressed play on a YouTube concert video, or dropped the needle on a turntable.