The Case For Trivium 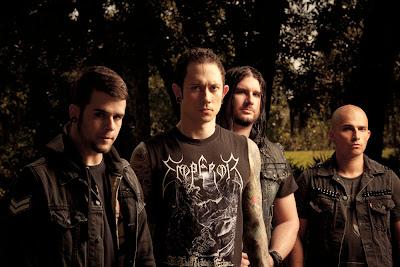 Just a forewarning, this article will be a rather extensive read. "Oh joy, a super long article on Trivium!" I can hear many of you sarcastically saying as you roll your eyes. This article is actually to address and hopefully correct that very notion that made you roll your eyes in the first place. Trivium has always taken a lot of flack over the years from the online community.  Granted, some may have been justified, but the purpose of this article is to provide evidence that not only is most of that flack unjustified but that you should also be grateful that they’re around in the current mainstream metal scene.


Before we begin, I should explain my attachments to Trivum so you all know what perspective this article will be coming from. I’ll start by saying I AM a fan of Trivium. After the Metallica phase and the Slipknot phase, the first two albums that would ultimately cement me as a metal fan for life were Dream Theater’s Octavarium and Trivium’s Ascendancy. I discovered those albums both at the same time and they both blew me away. Since then, my horizons have naturally expanded. I’ve discovered countless other bands and formed new favorites. Because of discovering such a variance of bands and sub-genres, I certainly don’t believe Trivium to be the be-all end-all of metal. Yet, they will always have my respect for playing such a big role in getting me into metal. So while music is one of the hardest subjects to write objectively on, and writing about one your key gateway bands is probably even harder, I’ll try to remain as middle-of-the-road as possible.

Let’s begin with Trivium circa 2003. Their debut album, Ember To Inferno, from that year seems to be all but forgotten by everyone but dedicated fans. Released through Lifeforce records, the album had a really raw feel to its production that would never again be replicated on another Trivium album. That being said, the rhythms and riffs were pretty catchy and the vocals may not have been anything out of this world but they were passionate and fit the music rather well. So for a first release from 17 year old Matt Heafy fronted Trivium, Ember To Inferno was a respectable release in its own right.

Corey Beaulieu and Paolo Gregoletto had shortly joined the band’s ranks after Ember To Inferno’s release. From there, the band had gotten picked up by Roadrunner and released their second album, Ascendancy, through them only to receive high praise from seemingly everywhere (it made Decibel’s Top 40 Albums of 2005). The production was cleaner, the vocals were heavier, the musicianship was more impressive, and the hooks were uncanny. This was definitely the cream of the crop during the metalcore boom of the mid-2000s.

2006 brought their third full length album, The Crusade, which for many people ends up falling on the bottom of their favorite Trivium albums list. Where The Crusade fell flat was through its use of completely clean vocals throughout the album’s entirety. It didn’t help that the majority of these clean vocals came across as Hetfield-worship either. The lack of variance between clean and harsh vocals just made the album feel bland and uninspired compared to their two prior records. Despite this, though, they did come up with a pretty wicked instrumental title track to close the album.

All eyes were back on Trivim in 2008 when they were set to release their fourth album, Shogun. They returned to form and one-upped themselves, as this is widely considered to be their best work to date. The Crusade-era Trivium was put to rest with the return of heavy vocals, even heavier riffs, shredding solos, and some hugely epic compositions.

Their fifth album that came out in 2011, In Waves, was certainly a mixed bag……so much so that the album as a whole just ended up feeling mediocre. There were fantastically heavy tracks (in part thanks to Nick Augusto now taking over the drums position), yet there were also a few tracks that were unquestionably their most radio-friendly material ever. The dichotomy was so egregious that you, as a listener, were left stranded in the middle desperately trying to figure out which way they wanted to go. It’s still super confusing to me that a track like “Built To Fall” and “Dusk Dismantled” are on the same album.

This is where my history lesson ends and my argument begins. As I’m sure most of you can put together, most of the deep seeds of Trivium hate were planted during the time of The Crusade’s release. Any “Metallica/Hetfield rip-off” comments you see are most likely from people who got big time butthurt from The Crusade. These kinds of accusations and your general run of the mill message board profanities waned off quite a bit after Shogun’s release, but gradually resurfaced with In Waves.

The people drinking the Trivium haterade have returned in true form recently, though, with the revealing of new material from Trivium’s upcoming album, Vengeance Falls. Good luck if you’re looking for anything positive about the new tracks “Brave This Storm” and “Strife.” The most common gripes are stemming from the fact that David Draiman, frontman of Disturbed, is producing this new album. Naturally, these gripes come in many flavors of “Oh god, Matt sounds so much like Draiman,” or “Oh god, this sounds so much like Disturbed,” where what they really mean is “Oh god, Draiman was announced as the producer of this album so I’m going to actively listen  for similarities and in the process will convince myself that Matt Heafy does indeed sound like David Draimain even though I wouldn’t be able to make such an assumption If I didn’t know Draiman was the producer in the first place.” People are lazy, however, so they usually go with one of the first two options. My problem with these comments in particular is that it was also publicly announced that Matt had called and talked to Machine Head’s Robb Flynn during the recording of In Waves for vocal inspiration. I guarantee you, though, that many sites never saw this as a “newsworthy” story; therefore, it didn’t get reported very much and not as many people either knew or cared. As a result, I never saw an “Oh god, Matt sounds so much like Robb Flynn” comment for anything from In Waves.

I don’t want this to seem like I think everyone under the sun hates Trivium, though. Some numbers would suggest otherwise. Between their last four albums, Trivium has sold over 655,000 copies in the U.S. alone (that is a real up to date number from Roadrunner). I say we take that 655,000 figure and play a fun theoretical game. Let’s say there’s this one central metal website that everyone goes to and that said metal site has put up reviews of Trivium’s last four albums. Let's also say each of these reviews got 60 comments saying that the respective albums were unbearable garbage. In addition, to up the anty, we’ll give each of those 60 comments on each review 60 likes; all from different people. Quick math tells you that’s 3600 different people per review, 14,400 total between all of them. Assuming these negative Nancy’s also bought one copy of the album they hated on, we’ll divide the 14,400 by the 655,000 total sold and find that the negative comments you were overwhelmed reading only turns out to be a little over 2% of the people that actually bought a copy. Keep in mind that 655,000 figure is on the low side and the 14,400 figure is on the extremely generous side.

To play devil’s advocate, numbers obviously don’t always equate to quality. That applies to most art in general. However, what this article has been aiming towards is the idea of the metal community needs to embrace a band like Trivium has made it into the mainstream. During a time when Avenged Sevenfold is romping around saying stuff like "We feel that metal dropped off after the '90s in terms of production and songwriting," or they’re ready to take the torch from Metallica and Iron Maiden, (Editor's Note: Durf will be tackling this in a feature next week, as soon as he cleans up all the vomit caused by hearing it) and there are other tours like this going around, why is Trivium apparently always on everyone’s shitlist? Shouldn’t we all be thrilled by the fact that a band that remains so faithful to its metal roots simultaneously makes it accessible to more people? Don’t we all at some point have to accept that a band like Cannibal Corpse will never be widely accepted?

Of course, we have to note that when I say “on everyone’s shitlist,” I really mean on the 2%’s shitlist. This article needs to be discussed more in the comments section. Whether you love, hate, or are indifferent towards Trivium, I want to specifically know why. Comments like “I love Trivium because they’re the greatest ever!” or “I hate Trivium because they suck!” will be severely frowned upon. You should all know where I stand on the matter. Let’s hear what all you guys have to say.