Scale The Summit - The Migration 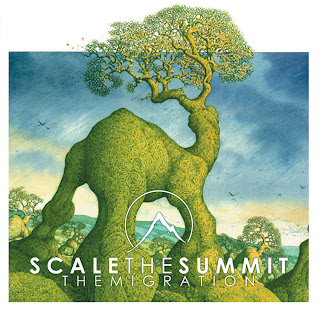 It's not often you find a band who gets exponentially better with each release, much less over the course of their first four albums.  It seems, however, that this inevitable forward motion comes second nature to the progressive power house that is Scale the Summit.  With their latest release, The Migration, they’ve raised the bar for themselves yet again.  While this album is lush with passages that are as sonically beautiful as they are clean, there is also an abundance of grooves that are so undoubtedly heavy and well-executed that a certain vibrant attitude of “let’s rock and let’s have tons of fun doing it” permeates the whole album.  It’s this very attitude that makes The Migration one of their best works to date.


The album starts off with two tracks that were the first to be released as singles by the band.  If you want some indication of the vast breadth of sounds that The Migration has to offer, look no further than these opening tracks. “Odyssey” opens the album with a barrage of heavy guitar chords that are varied and eventually overlayed with some entrancing lead solos.  The track experiences many gear-shifts, however, as these heavier guitar tones are tempered with softer and more harmonious notes, invoking a sense of wonder and mystery into what journey the rest of the album will take you on.  Because of this, the album’s opening track certainly lives up to its name.  Next, “Atlas Novus,” lures you in with its serene splendor.  Reminiscent of “The Levitated,” a track from their previous album The Collective, “Atlas Novus” sets its mood and pace through the use of smooth rolling guitar notes that flow both naturally and beautifully; creating something that’s more along the lines of post-rock as opposed to metal.

Perhaps the real migration to be found on the rest of the album is the constant back and forth between the two styles of the aforementioned openers.  Whether it’s the sweet warm charm of tracks like “The Olive Tree” and “Evergreen,” or the heavy grooves of headbang worthy tracks like “Narrow Salient” and “The Dark Horse” (my personal favorite of the album), The Migration offers a gamut of noises that culminate into an amazing listening experience, arguably the bands best yet.  Scale The Summit has always been a very technical band at their core, but the beauty of this outfit is that their technicality never comes across as overbearing or overshadowing of their artistry.  They’re one of those bands that just seems to get it in terms of mixing melody and technicality into one accessible package.

While the majority of The Migration is spot on, there is one thing that took away from the overall experience just a tad.  My main gripe, albeit a small one, is the length of the two tracks that serve as interludes, “Oracle” and “Willow.”  These tracks were easily the most relaxing on the album, but combined, they amount to only a little over two minutes.  Although "Oracle" does this less so, these interludes are so captivating that when they end they seem to have cut off prematurely and instantly evoke a feeling that there is much left to be desired.  It’s a shame that these tracks weren’t developed more because they certainly had potential to add something great to the album.

In the long run, The Migration will prove to be a pivotal album for Scale The Summit.  While I’d say that The Collective was an album that helped define the band's sound, this new album takes the best elements of its predecessor and improves upon them many times over.  Take the placidity of post-rock, mix it with the heavy and infectious riffage of metal, give it all a progressive spin, and you have The Migration, one damn fun album to listen to.  It’s an alarming thought, but the members of Scale The Summit only seem to further hone their craft with every release.  Don’t be surprised if you see this one on a lot of year-end lists.

- Mick
Posted by Brutalitopia at 8:04 AM

Email ThisBlogThis!Share to TwitterShare to FacebookShare to Pinterest
Labels: Mick, reviews, scale the summit, Sounds Known, the collective, The Migration