Church Of Misery - Thy Kingdom Scum 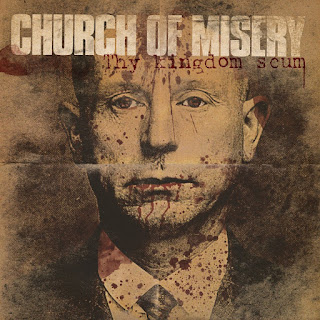 With the impending release of the first Ozzy Osbourne-fronted Black Sabbath album since 1978 to be released in the coming days, doom metal is most certainly on the rise. One such band is one I have only become familiar with in the past year and that would be Japan's Church Of Misery. The band is chock full of riffs and lyrical content that has covered only the most vile serial killers this planet has ever seen.  Thy Kingdom Scum is their 5th album and their first in 4 years and it is more of the same great doom that you should expect from this band from the land of the rising sun.

The album does start out a bit slow and slower than in the traditional doom sense as the riffs are there but the vocals are not, but this will not lull you to sleep. Instead it should conjure up the nightmares that are about to unfold in front of your very ears. "B.T.K.(Dennis Rader)" is an instrumental showcase of sorts that opens up the band to attack full force on "Lambs to The Slaughter (Ian Brady / Myra Hindley)." The band throws many different things at you all at once with the stoner, doom, sludge, and blues sections becoming quite a formidable tandem. The vocal style of Hideki Fukusawa are a challenge for doom traditionalists but should be no problem for those who are inclined to things that are more sludge and psychedelic; seeing as they are a bit more out there than most in the genre.

Riffs are plentiful on this album as one should expect from a band built in the mold of doom metal's strongest bands and they certainly do not disappoint, much as the band surprised me with their live performance at Maryland Deathfest X last year. Perhaps the album's strongest song is its lead single "Brother Bishop (Gary Heidnik)" which is named for a particularly horrible individual whom you can read about here. The song buzzes in from the very beginning and simply takes no prisoners with one riff following the next in a psychotic succession of slaughter. Headbanging is nearly required during the song as no neck is safe from the fury that is unleashed by lead guitarist Ikuma Kawabe.

The album does have a surprise as many albums do and this one is a cover of an obscure song by an obscure band and thus research is required. The song is called "One Blind Mice" and it was originally recorded by British progressive outfit Quatermass (a band also covered by Rainbow on their debut). The new version and the old one simply rock so make sure you check that oldie here. This is an album that should whet the appetites of fans of the doom metal genre, old school metal heads and people who worship the almighty riff. This is surely one album that doesn't disappoint and one you won't soon forget.