Ghosts at Sea - Hymns of Our Demise 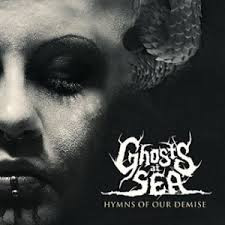 Ambient or atmopsheric black metal has sort of become a trendy genre in the metal scene lately.  We’ve discussed the implications of the “hipster” label, both in general and as it specifically relates to black metal, on this site before, but unfortunately it seems like you can’t get away from it as far as atmospheric black metal is concerned, and for an understandable (if ridiculous) reason.  While it can be just as bleak and ominous as “trve” black metal, ambient black metal is often less decidedly harsh than its “trve” cousin.  I love the genre, but I can admit that readily and easily; Alcest’s Escailles de Lunes will never in a million years be confused with Marduk’s La Grande Danse Macabre.  But saying that just because it’s different or “less harsh” makes it worse or bad music is as ridiculous as spelling true with a “v” to seem, like, totally metal, man.  There are great bands making amazing atmospheric black metal right now, which brings me to Ghosts at Sea, a band hailing from Indiana and Kentucky in the good ol’ USA, and their debut album Hymns of Our Demise.


Ghosts at Sea is a two-man project comprised of Jon Luick and Tom King, with Luick playing bass and handling the visual design for the project and King taking charge on the vocals, guitars, drum tracks, and recording/mixing/mastering duties.  Hymns of Our Demise certainly doesn’t sound like a two-man show, especially not a two-man show with programmed drum tracks.  King’s guitar licks move fluidly in and out of Luick’s heavy, shadowy bass to blend swirls of desolate atmosphere with breakneck-pace black metal riffs, and the drums do a great job of carrying both backbone and fill duties within the songs.  Album opener “A Fitting End to Human Suffering” begins with a looping, melodic doom riff, and though less than three minutes long, “Decay” is a grimy slice of sludge heaven, rife with distortion and leaving me feeling like I needed to shower immediately after listening.

While King’s vocals don’t break the mold of black metal vocalists, his rasps more than stand up to the stunning musicianship offered on the record.  When he repeatedly howls “We worship!” on album standout “The End of Days,” it’s a primal, chilling wail that brought feelings of both hopelessness and longing to the forefront of my mind.  Similarly, his tortured screaming of the title line on “With the Weight of 1,000 Suns” gives you the sense he feels that weight weighing on him, forcing out his howls.  The vocal styling is nothing you haven’t heard before, but King backs the lyrics he shrieks with unabashed emotion, which only adds to the power and catharsis found on Hymns of Our Demise.  The album isn’t perfect; the two closing tracks, “With the Weight of 1,000 Suns” and “Through the Shadow that Binds Us” sort of run together and feel a bit forgettable, especially compared to the strong first four tracks.  It isn’t that they’re bad songs, but it feels like the strengths highlighted within the first half of the album are a bit taxed trying to cover almost twenty-five minutes over two songs.  But that’s a small slight that almost seems trivial to mention; it’s not as though a little more black metal than necessary has ever killed anyone.

Luick and King clearly know what they’re doing with Ghosts at Sea; Hymns of Our Demise sounds less like a debut album recorded to get out of the way than it does a polished album by a band that knows what it wants to sound like and goes for it at fullspeed.  There was nothing I thought was particularly bad or poorly done, just things I would have liked to see; the most interesting part of the album to me was that doomy riff that lead things off, and seeing more non-black metal pieces appear throughout the album would have made for some great changes of pace, especially in the album’s final twenty minutes… but that’s just me being picky.  Truth is, Hymns of Our Demise is the best debut album I’ve heard this year, and it stands alongside Deafheaven’s Sunbather as an amazing 2013 release that showcases everything that’s right with the more ambient direction taken by some black metal bands.  By finding a middle ground between unflinching severity and foreboding atmospherics, Ghosts at Sea have created an album that forces you to wallow in the misery behind the pain; instead of just feeling the stab wound, you have to watch the knife twist as well.  Hymns of our Demise should be sung loud by everyone, and Ghosts at Sea is a band that should have your attention going forward.

You can check  out their bandcamp page here.