Fear Of Tomorrow: Satan - Court In The Act

Welcome all to my column here at Brutalitopia; one that examines the roots of heavy metal and many bands that predate the ones of today with many different albums being covered and the roots of many a band being unveiled. The first edition of this column is dedicated to NWOBHM band Satan and their 1983 debut Court In The Act. This band had only released 2 albums prior to this year but has recently made some waves with their newest album  Life Sentence; a brand new LP chock full of what made and still makes Satan a viable member of this heavy metal community. Let's have a listen and see why. 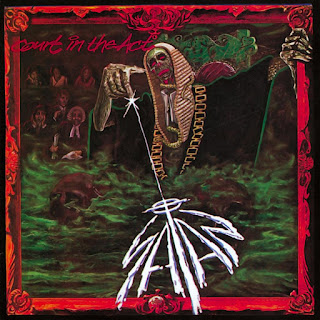 Opening with a nearly 2 minute intro the band comes across with a classic song titled "Trial By Fire" which is bursting with guitar melodies, backing bass and high pitched vocals; all of which are essential for a NWOBHM to stand above others.  The fury continues when "Blades Of Steel" is introduced and the riffs intertwined with the great vocal work of Brian Ross; this song also serves as a break from the courtroom banter that this band has seemingly used on all of their albums complete with references to it on all of their albums and directly inputted in their lyrics.

The songs are of average length but all tell stories of either the law being enforced, viking lore, and being insane. The album nearly becomes a concept album from the sixth track "Break Free", the main focus here are the driving guitars which showcase a good amount of energy as: "You were convicted and sentenced to life, your cries of "injustice" unheard"; in almost the same way as Iron Maiden's "The Prisoner". This song gives way to "Hunt You Down" which follows the freed protagonist as he is pursued by those that originally had committed him to a cell. Following 2 instrumentals the story comes to head with "Alone In The Dock", where the judge lays down the ultimate law as you die in flames all alone.

Guitar solos blaze a path through many of the songs and the pyrotechnics here thrust the band right into your face; merely giving Thin Lizzy credit for this would be an understatement. It also bears mentioning that the bass is always very high in the mix and backs the leads quite well much like the rest of the best of this musical scene. Court In The Act is a unique album for its lyrical content and it shreds like so many other classic albums from the other side of the pond and it is worth noting that this classic should not be missed by those of you who love classic heavy metal. 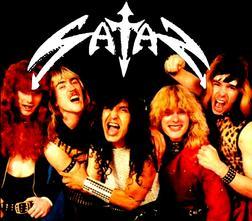 Satan's new album may very well have topped this classic as the modernized production and musicianship improved over the last 30 years. We are lucky to have bands that have been around for this long and ones that also mange to get better over the course of time. I will leave you with a new track and some classic NWOBHM to keep Satan on your mind.