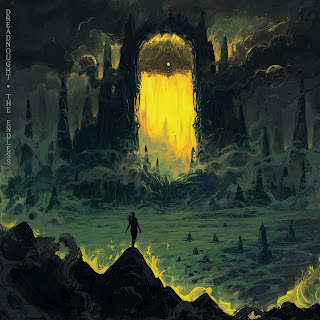 Thematically, The Endless poses whether we can break the vicious cycles of the human experience for the better or if we are doomed to be forever bound to them. It's a deeply introspective topic that requires an equally immersive soundscape to be effectively driven home. By adventuring into more melodic and sublime aspects of their sound, Dreadnought accomplishes exactly this. They've always been a big selling point for the band, but the clean vocal melodies between main vocalist Kelly Schilling and keyboardist Lauren Vieira took on a new life in this album and were major standouts. Not only do they continue to provide a hypnotic allure, but they also act as a vital percussive backbone for the album. The prime examples are the two opening tracks, "Worlds Break" and "Midnight Moon", where these vocals tap into something tribal with how rhythmic they are. Harsh screams were not completely forgotten; while sparsely utilized, there are moments of shrieks accompanied with powerful guitar distortion to give the album well-timed jolts of energy.

Another aspect of The Endless that took me a bit by surprise was the lack of the saxophone; a key ingredient of the Dreadnought stew that greatly aided in putting them on the map in the first place. In its absence, the ambience is managed more so by the overall reverberating quality of the guitars along with the varied performance of the keys. Clean guitar patterns echo and drone just enough to create a tone for each track that is simultaneously subdued and ominous. Whenever these tones kick-in to more distortion, they often are elongated chords that take the form of these grandiose walls of sound. The keys employ a wide range of sounds from your typically bright, piano-sounding notes to organ, to mellotron. All elements from this wide array feel appropriately placed, however.

When taken in as a whole, The Endless is a powerful album from Dreadnought...perhaps their most somber and poignant to date. If one were to take their discography and plot it your classic story structure arc, The Endless would fall in the resolution portion of that arc. Many things are stripped down about this album compared to their previous work, but that allowed it to be tap deeper into more emotionally evocative areas that bring a lot of closure. By no means is this to suggest that this should be the last Dreadnought album, but there's something deeply cathartic about the The Endless that feels as if some sort of chapter is being closed. It's an album I highly recommend you listen to in its entirety in one sitting.