Between the Buried and Me - Automata II 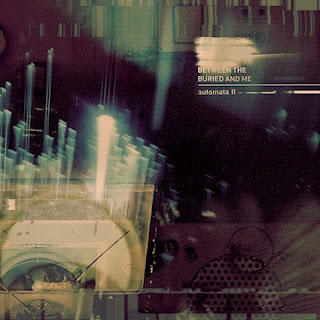 When we last heard from legendary prog-metallers Between the Buried and Me, it was way back on March 9 of 201...8.  So fourteen weeks ago.  Wow, the world seems super different now.  Feels like it's been years.  Anyway, three months ago, the touring stalwarts released Automata I, their eighth album.  Mick handled the Töp's review, and he liked it, closing with the line "BTBAM hasn't faltered yet."  I agree with his assessment.  So now, Between the Buried and me is preparing to launch Automata II (out July 13th via Sumerian), which is their second eighth studio album (we'll get to that).  The first half of Automata was welcomed by BTBAM diehards; will the second get the same treatment, or will the band finally falter?

"The Proverbial Bellow" is the first track on Automata II, and it instantly made me forget any trepidation I had about this follow up.  This track is everything I want from Between the Buried and Me; it's probably my favorite song of theirs since "Swim to the Moon" from 2009's The Great Misdirect (which is my favorite BTBAM track of them all).  So yeah, "The Proverbial Bellow" is good.  It starts slowly, but quickly builds to each of the band members doing their thing, pushing the intensity further and further until you're sitting at the edge of your seat.  Vocalist Tommy Rogers' keyboard playing continues to be the band's secret weapon, and it's utilized to full effect in the first third of "The Proverbial Bellow," while his vocals run their usual gamut from near-whispers to full bellows to all out roars.  The rest of the band is similarly in top form; Dan Briggs might be my favorite bassist working right now, and during the middle of "The Proverbial Bellow" when it gets pretty weird and out there, his bass line underneath it all is such a perfect anchor for the madness.  The classic rock flourishes from guitarists Paul Waggoner and Dusty Waring is an absolute blast that made me so happy I was giggling, and Blake Richardson keeps the whole machine moving along seamlessly.  Honestly, there's a chance that if Automata II would have just been "The Proverbial Bellow" three times, I would have been fine with it.

That's too many times.

"Glide" is a two-ish minute interlude track on which BTBAM completely indulges their strange; it begins with an accordion and sounds like the world's most terrifying circus.  Even when it moves to Rogers crooning over piano and Richardson's drum fills and then speeds up, "Glide" never loses that sense of unease...

...which "Voice of Trespass" immediately takes and dials up to 11.  It's a little odd to me that "Glide" and "Voice" are two tracks instead of one; it's like when Kanye made "All of the Lights (Interlude)" and "All of the Lights" two separate tracks on My Beautiful Dark Twisted Fantasy even though the former is just an intro to the latter.  But I digress.  "Voice of Trespass" begins in absolute insanity, a frenzied jazzy Frankenstein's monster, puttin' on the Ritz right into your ear holes.  It's an incredibly danceable track, by which I mean there are many parts you can dance to before the band changes tempo and rhythm and leaves you floundering.  I said earlier that "The Proverbial Bellow" is my favorite BTBAM song in almost a decade, and that's true, but "Voice of Trespass" is the song I'm most excited to see them perform live, because holy fuck that's going to be a party.

"The Grid" is absolutely sublime in its ending; encapsulating everything Automata and Between the Buried and Me have been building toward pays off in an absolutely beautiful crescendo.  That "The Grid" sounds like it could be three or four different songs all built around the same riff or idea is a testament to the musical and writing skills of Rogers, Briggs, Waggoner, Waring, and Richardson.  This may be blasphemy, people may yell at me, but I don't know if the band's songwriting has ever been as good and crisp as it is on Automata II.  Waggoner and Waring's guitars at the end of "The Grid" while Rogers croons "We are in this together" and Briggs and Richardson be an absolute groove machine of a rhythm section is everything I want this band to be.

So all that's left to talk about is my one gripe with Automata, the thing that keeps gnawing at me despite my love for the album: Why the fuck was this album split in half?  Both parts are musically and thematically similar, and the combined runtime of both is just over 69 minutes, or about the same as The Parallax II: Future Sequence.  So what gives?  While looking online, trying to find an answer, I discovered an interview Tommy did with It Djents in which he touched upon this, saying


"This was all well-planned out. Automata was recorded as a normal album, it just happened to be very long, all our albums are very long, we just thought we are in a day and age in which excitement comes and goes super fast. I feel like albums just come and go, and we thought it might be cool for the fans to get two opportunities to get excited about music from us this year. Kinda keeps you hanging, not give it to you all at once. It might be something that works or something that doesn’t work, but I feel like because our music is so dense and it is so long, it can really work for a band like us.  And maybe, I feel like a lot of times on an album, the second half gets overlooked cause people don’t dive in that much, and maybe because we are releasing a second half separately people pay a little more attention to our album, which I think is very strong. There is quite a few reasons, we just wanna try."

So... splitting Automata doesn't work at all, for the simple reason that Automata II is light years better than Automata I (which, again, was pretty good).  Automata II, as it stands, is probably my third favorite BTBAM album.  Honestly, I see one of two things happening: First, I combine Automata I and II into one very, very good album that starts out good and finishes as strong as an album can.  Second, and more likely: I only think about doing this when I'm out and about, listening to Automata II, and it never comes to pass, and with the albums split and released so closely, I have no reason to go back to Automata I.  There's also the teeny tiny issue of asking your fans to pay full-album price for each half of one full-length, essentially making them buy it twice, but that's an issue that deserves it's own op-ed.

Yeah, I'm finishing up the rant.  It's over.  Sorry for that.  Back to the review.

Split issues aside, there's no denying that Automata II is an absolute classic.  Pound for pound, it's right behind The Great Misdirect and Colors in the Between the Buried and Me discography (yeah, in that order; fuckin' fight me); if I were to rank Automata as a whole, it would probably fight The Parallax: Hypersleep Dialogues for the spot below Coma Ecliptic and above Alaska.  But I'm not responsible for all of Automata; Mick did I, so that means we have to do a podcast or something to properly rank its position in the BTBAM catalogue.  What am I responsible for is Automata II, and to that end I can say that Between the Buried and Me has not faltered an inch and has in fact delivered their best album in nearly a decade.  Automata II is surprising, challenging, dark, and above all, fucking fun.  This is a fun album to listen to, and I can certainly agree with Tommy Rogers that it would be unacceptable for people to sleep on this album's back half.

Automata II is out July 13 on Sumerian Records.