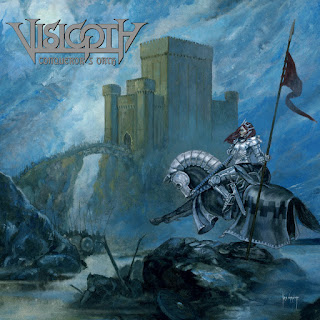 Salt Lake City's Visigoth hit the metal scene hard with their debut The Revenant King back in 2015. It was chock full of love for bands that deem themselves epic in the scale of their music, whether it be Cirith Ungol, Brocas Helm, Slough Feg, and even a cover of Manilla Road's 'Necropolis' to boot, the only track to clock in under the 5 minute mark. 2018 sees the band back with a renowned fervor with Conqueror's Oath. How does the sophomore album set up for the band?

Conqueror's Oath opens with the straight forward and anthemic 'Steel and Silver' full of galloping beats to accompany powerful front man Jake Rogers. Overall it feels like a cold open for the powerful 'Warrior Queen' with tons of bombast from the guitar section of Leeland Campana and Jamison Palmer while bassist Matt Brotherton fills in the gaps with battery man Mikey T. Using the female image of a warrior isn't a foreign concept but the band sets the battle scene quite well; it feels like during the guitar solos that she heads straight into battle and doesn't bat an eyelash while doing so. The flute interlude acts as a come down to the final setting for the queen as she ascends to the throne.

Beyond track 2 the album becomes a lot less threatening time wise; for all of the power that The Revenant King had, it could have benefited from a few shorter and direct tracks. 'Outlive Them All' is constantly pounding at high pace; it feels a lot more heavy metal than the former album's doom styled dirges. 'Hammerforged' is a fist pumping affair through and through with enough melody and guitar solos to satiate any fan of the genre.

Quite literally opening the b-side to the album is 'Traitor's Gate' which chugs along and shouts more about battle and rides headlong into the fight much like the tracks preceding. Visigoth have helped to forge a new path from an unlikely area of the country to continue the epic power metal pushed forth over 30 years ago from fellow Americans Jag Panzer while combining elements of classic bands and a love of being a bunch of nerds who couldn't care less about judgement. They certainly never stray from their roots and 'Salt City' is an ode to the city that they call home. Opening with bass aplomb and eventually settles into a little bit of a boogie akin to what their countrymen Gygax just wrote an entire album doing and what Thin Lizzy made a career of. 'Blades In The Night' is an adventure in neck snapping riffs and a master class at that. The guitarists get to show off their technique which is chock full of pinch harmonics and slow plods behind Rogers' pipes. Album closer and title track 'The Conqueror's Oath' is a formidable bookend to the band's second album. as it slows things down as an exit from battle and march towards home.

Visigoth stand side by side with other bands that have plumbed the depths of epic sounding metal much like Crypt Sermon, Sumerlands, Spirit Adrift and Eternal Champion have recently and sit fairly high with label support from the all powerful Metal Blade Records. Conqueror's Oath is a fine addition to the band's catalog and a great start for the genre in 2018.