Animals As Leaders - The Madness of Many 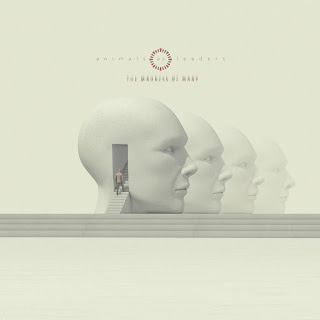 As long as music continues to exist, there will always be a market for musicians who can play their respective instruments at god-like speeds in varying styles. For many of these often progressively-minded bands who successfully corner this market, technicality is harnessed as the hook that piques the ears of a first time listener and ultimately keeps them coming back for more. Instrumental act Animals As Leaders became such a band with the release of their self-titled debut in 2009. From that point forward, regardless of how much I ended up liking or disliking their subsequent material, knowing the capabilities of Tosin Abasi was enough reason to warrant at least a few honest listens. With The Madness of Many, the band continues in the slightly different path established with their last album, The Joy of Motion. But while this path favors technical flourish over heaviness, The Madness of Many dials it in much more smoothly than their previous effort.

Considering their nature, it's fitting that tracks on The Madness of Many have titles such as "Arithmophobia", "Cognitive Contortions", and "The Brain Dance". The album keeps razor-sharp focus on nurturing five to six minute excursions that are hellbent on expanding your mind. Particularly on "The Glass Prison", quick spurts of bright, sweep-picked guitar solos often feel like they are rolling off the edges of the inside of your head; seducing you into each section's repetition and variances thereof. With these sections constantly holding your attention, it leaves plenty of room for the electronic ambiances to fill the void between; bringing a sort of soothing calmness to all the other technical acrobatics flying around.

The guitar soloing also takes a noticeable shift this time around. While they are still unquestionably still very technical and unyielding in their speed, there was clearly a conscious effort to make them ring more true. "Private Visions of the World" and "Backpfeifengesicht" are prime examples of how particular sections of guitar solos are sustained at such great lengths that they ultimately take on a new life of their own by delivering that much more of an emotional punch. Another familiar style of guitar playing brought back into the mix is the thumb slapping technique that was most prevalent on "Physical Education" and "An Infinite Regression" from previous albums. And by brought back, I mean brought back in a BIG way. Tracks such as "Cognitive Contortions" feature these sections being played at dizzying speeds, thus adding another layer of proficiency to an already dense amalgam of styles.

Perhaps this could viewed as a maturation as opposed to a weakness, but The Madness of Many flows so effortlessly together that there's no real stand out track in terms of a "heavy hitter" like "CAFO" was from the self-titled debut. The closest thing to this would be "Transentience" as it boasts a nice variety of triumphant chords interlaced with thick riffs that give off a fun rock vibe. Otherwise, the album tends to shy away from its heavier metal tendencies of yore. Overall, however, The Madness of Many benefits greatly from its smooth pacing and comprehensive mix of styles we've come to expect from them. It's an album that may not be the best for throwing on to "rock out" to, but if you're in the mood for something that can have fun but is also be delicately nuanced this is exactly what you're looking for.