If These Trees Could Talk - The Bones of a Dying World 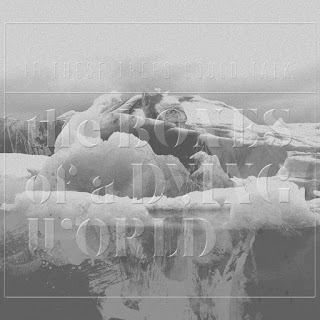 If you ask a dozen different people to define instrumental post-rock/metal and give you a band that best fits that definition, chances are you'll get some different answers.  From the heavy riffs of Pelican, to the proggier leanings of Scale the Summit, to the ambient/intense duality of Explosions in the Sky, to any other band you can think of, the post- genre seems to lend itself to a litany of sounds while defining none of them.  Personally, my baseline for post-metal is ISIS, so my baseline for instrumental post-metal is "take Aaron Turner's vocals away from ISIS, and go from there."  It's a fascinating genre that allows for quite a bit of experimentation, subverted expectations, and deviation from the norm (like all music should), and I think it's cool that so many different yet similar sounds can fit under one umbrella.  Now that you know how I feel about post-metal, let's talk about If These Trees Could Talk and their new album The Bones of a Dying World.  If These Trees Could Talk hail from Akron, OH, and have been around for a little over a decade.  They first crossed my radar when I heard some songs from their second album Red Forest, all of which I enjoyed.  The Bones of a Dying World comes at a perfect time, as post-metal has seen a lull in quality releases this year compared to years past and other genres.

"Solstice" opens the proceedings with a quietly haunting guitar melody, quickly establishing a melancholic, pensive tone; the drums, bass, and other guitars eventually fall in and keep pace before melting into a heavier section.  The "light and mellow part/heavy part" repeat dichotomy is fairly ubiquitous throughout metal genres, post-metal and otherwise, but If These Trees Could Talk manages to make "Solstice" stand out by keeping that melancholic tone throughout the song, repeatedly going back to the opening melody while expanding upon it and molding it around some of the heavier set pieces.  The middle quarter of the song is especially memorable, with multiple guitar riffs and melodies dancing over a perfectly balanced rhythm section.  "The Giving Tree" is my favorite song on the album, opening with a nimble, rumbling bass riff and overlaid guitar melodies, evoking a feeling of running through a forest as the sunlight breaks through the canopy.  It's one of the most evocative songs of the year in terms of emotional imagery, and by the time it brings out the album's best guitar riff for the last minute, you know you've found something special.  Other album standouts include "The Here and the Hereafter," "Iron Glacier," and especially album closer "One Sky Above Us."

That complementing of performances is perhaps the most impressive part of If These Trees Could Talk (and The Bones of a Dying World); all of the musicianship approaches the same level, so there's no real member that sticks out the way, say, Chris Letchford does with Scale the Summit or Tosin Abasi does with Animals as Leaders.  That isn't a dig at the members of any of these bands, only a way of saying that listening to If These Trees Could Talk is a more wholly engrossing experience than listening to The Migration just to hear Letchford's mind-bending work on "Atlas Novus" (which I do at least once a week).

In my review of Gorguts' Pleiades' Dust the other day, I talked about my affinity for albums made up of a sole composition and the way they express an idea musically over a longer, uninterrupted piece of music.  The Bones of a Dying World is not a single song, but it's the best kind of multi-song album to listen to, in that each of the songs feel similarly rooted in a sense of place and feeling; listening all the way through is a rewarding, engaging experience, one that I highly recommend, but there is something to be said about being able to find a favorite song among the shorter trips that make up the album-long journey.  I mentioned earlier the lull in quality post-metal records this year; If These Trees Could Talk have done their part to fill it, as The Bones of a Dying World is a pretty terrific album.  After sitting on the sidelines for a decade, it's time for this band to get more attention in a big way.

Email ThisBlogThis!Share to TwitterShare to FacebookShare to Pinterest
Labels: 2016, album review, Durf, if these trees could talk, isis, post-metal, review, the bones of a dying world