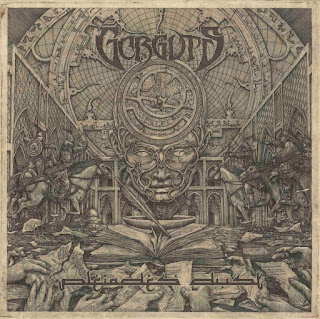 When Gorguts released Colored Sands in 2013, it had been over a decade since the band's last album, and Luc Lemay was the sole Gorgut remaining from that endeavor (as he ought to be).  Colored Sands was a critical smash, Lemay's new lineup - Kevin Hufnagel on guitar, Colin Marston on bass, and Patrice Hamelin on drums - crushed it both in studio and live, and almost immediately people (me) began hoping for a follow up from this edition of Gorguts (it's weird, and I can't explain it, but even though I liked Carcass' Surgical Steel a bit more than Colored Sands, I remain far more excited by the prospect of new Gorguts than new Carcass).  That follow up has been delivered in the form of Pleiades' Dust, a one song EP that spans an even thirty-three minutes.

I tremendously enjoy the "one song" approach to albums; even when constructed to be listened to as a whole, when you break an album into songs, it gives the listener an easy out, multiple times to pause or stop listening.  Meshuggah's Catch Thirty-Three remains the gold standard to me (I know it has tracks, but we both know that's because of studio bullshit), with Inter Arma's The Cavern and Bongripper's The Great Barrier Reefer right on its heels.  There's something fantastic about listening to an album for twenty, thirty, even sixty or more minutes and hearing it flow together as a singular composition, as opposed to hearing tracks that exist in a particular sequence because they sound good that way or are telling a story in a concept album.

Pleiades' Dust is a worthy addition to... everything; Gorguts' discography, technical death metal, sole composition albums... literally anything you can associate with this album is better off with it existing than it was before the album came out.  The album covers a lot of ground in its half hour, beginning with a series of riffs that would feel right at home on Colored Sands.  One of the reasons I think Gorguts is so popular is because of the feeling they bring to tech death, a genre that can feel cold and emotionless at times.  That's never been the case with this band, as they manage to imbue every note and vocal with an almost overwhelming level of catharsis while remaining incredibly tight technically.  There are jazzy interludes, and movements that consist of quietly plucked guitars; there are also tremendous death metal riffs and moments of nothing more than a humming amplifier.  There are moments where you almost start to think maybe this would be a good place for a track break, or to divide the composition, but then something changes just a little and you're right back in it, entranced in the musical journey.

I can't stress enough how great Pleiades' Dust is, but my favorite aspect of the album is how it manages to give each member a chance to shine ABOVE AND BEYOND the base line of amazing they're doing.  I'm not looking up  time signatures for these, because I want you to listen to the whole album, but holy shit are there some impressive moments.  Luc Lemay, in addition to being the nicest guy in metal, is a hell of a guitarist and vocalist; as he and Hufnagel whip up a swirling maelstrom of dueling guitars, he bellows over it and its easy to get lost in the the intensity of the movement.  There's a point where Hamelin makes it sound like someone is tap dancing on his cymbals, while Marston has my favorite part of the album, a dizzying bass line of such breathtakingly controlled chaos it makes me exhausted just listening to it.  Pleiades' Dust is an album of in your face metal aggression and subtle artistry; the nuances of how it all manages to fit together in its own time is just another part of why it's so great.

Gorguts didn't need Pleiades' Dust.  Luc Lemay's legacy in metal has long been secured, even before Colored Sands.  But even with an entirely new lineup, and twenty-six (!!!) years after the band's first demo, he remains a force.  He could easily tour with session musicians, play festivals, and make a decent amount of money; instead, he's working with some of the most talented musicians in the genre, unsatisfied to rest on what Gorguts has been and pushing toward something bigger, something different, something new.  Mick wrote the other day about the new Gojira album and how they're changing things up, and the past few releases have seen Opeth, Mastodon, Baroness, Dream Theater, and other metal stalwarts change it up, all with varying degrees of success.  All of this is, I believe, a good thing.  In that same vein, there's no one I'd rather bet on to change things up while maintaining a level of familiarity than Lemay, and I can't help but get excited for what he and Gorguts are going to come up with next, even though I should really just enjoy that they ever came back at all.