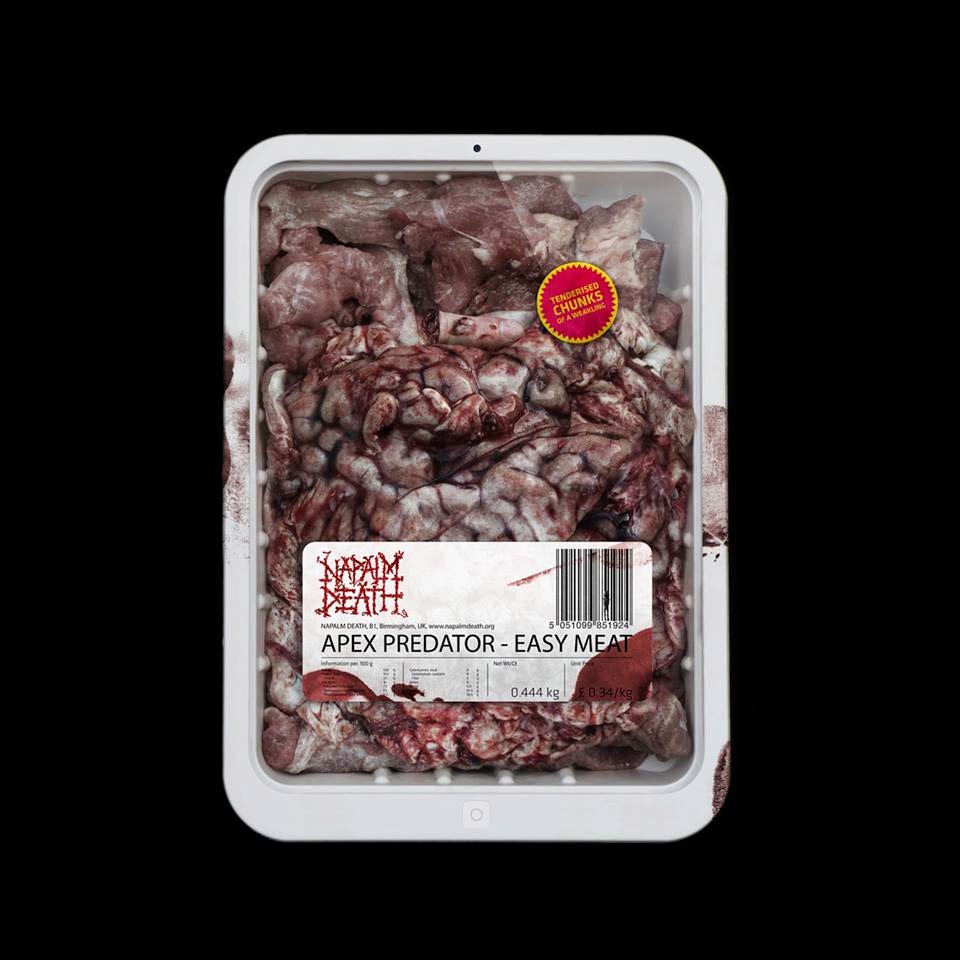 You know a new year is starting off right when Napalm Death choose to have it start with a new album of theirs. The oddly titled Apex Predator - Easy Meat continues the band's streak of strong albums which include more recent entries such as Time Waits For No Slave and Utilitarian. Barney Greenway, Shane Embury, Mitch Harris and Danny Herrera; the band's main battery for over 20 years are firing on all cylinders. Has it really been 3 years since their last album?

Spoken word dialogue starts off the album slowly and eventually the pained growls enter the fray. The album's first proper song 'Smash A Single Digit' is fast and furious and acts as an all out assault on the sense following a slow intro to the album. Danny Herrera pounds away on the skins and the blast beats give ample wrecking room for Barney Greenway to smash his way through the speakers. 'How The Years Condemn' brings in some solid bass for an intro and then everything comes into form and the excellent chugging begins and the demonic effect added to the vocals is a great touch.

The middle section of songs are all a great collection of the modern day iteration of Napalm Death, surely the grind is there but the blend with death metal is unmistakable; the blast beats mixed with slowed sections and a huge emphasis on the underlying riffs are a departure from where the band was over 20 years ago but the brain trust that essentially started working together with 1990's Harmony Corruption, have had a long time to develop a distinct style and have harnessed this aural excellence for some time.

I would be hard pressed to not mention the impetus for the album; a sweatshop collapse in Bangladesh that was caused due to the increase in the size of the structure to pass the buck caused over 1500 casualties of capitalist scum. If you don't believe me read more here. If you can check out the lyrics to 'Beyond The Pale' you will be treated to imagery like this " Looking out from the inside/Accessing wreckage/from powers that be/The effects of a landslide/No Financial gain/to Restore poverty." Again Napalm Death are a politically charged group of individuals who bring to light atrocities that don't receive the notice they otherwise should have.

For being one of the driving forces in the extreme music scene for decades and for also doing so with a purpose; Napalm Death deserves universal respect to go along with critical acclaim. 2015 as a whole has a lot of catching up to do to top this album that happens to gets better and better on repeated listens; plenty of nuance to pick up on time and again. Thank you Napalm Death for staying true to who you are and that you for Apex Predator - Easy Meat; an album that will continue to garner the attention it rightfully deserves as the year goes on.