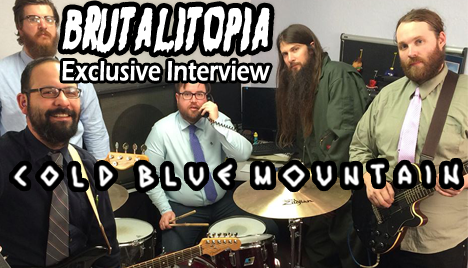 Last Thursday night, Mick and I ventured out into the cold Chicago night to see a concert (as we are wont to do).  Neither of us had been to the venue (Live Wire, in Old Irving Park) before, so there was additional excitement in the air.  Live Wire is a solid if unspectacular dive bar/venue, with a stage at the far end of the main room, movies playing on mute on the tvs, and ice cold Lagunitas IPAs ready to be drank.  Not a terrible place to see a show, so we settled in.  Cold Blue Mountain was the attraction, as the Chico, CA band is in the midst of their first-ever headlining tour supporting their sophomore album Old Blood.  I was lucky enough to get to talk to four of the guys in the band about their roles and responsibilities, the musical talents of water heaters, and Billy Joel's promising career in metal, all of which you can see in the video below after the break.


Cold Blue Mountain is unequivocally one of the most laid back, fun bands I've ever had the pleasure of speaking and sharing beers with.  Yet behind that chill, at ease demeanor lies a band that can fucking bring it onstage.  Their set to close the night was amazing, the band firing on all cylinders for a performance that impossible for Live Wire's small stage to contain (props to LW, however, for one of the cleanest, best sounding sound systems I've heard in a venue in a long, long time).  Check out the band's upcoming tour dates here, and seriously: if they head your way, check 'em out.