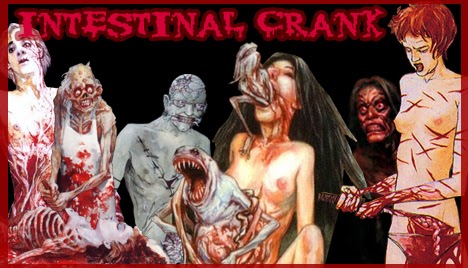 I've written before about some of the influencing factors in my getting into metal; discovering new music through internet radio and a few key friends who turned me on to bands like Thrice, Mastodon, and Opeth which turned out to be the Gatekeepers to my metal fandom.  One thing I haven't really written about is my fifteen-plus years of dealing with Crohn's Disease, and the impact that's had on my perception of metal, discovery of new bands, and even tastes in metal sub-genres.  During the last few weeks of 2014, however, as I was working on my Top Albums list, I was simultaneously dealing with one of the worst Crohn's flares I've ever had; metal and my intestines had never been so blatantly linked, but the more I thought about that, the more I realized that there's a great possibility that being diagnosed with Crohn's is a much bigger part of why I'm a metalhead than I ever gave it credit for.

If you're wondering what Crohn's Disease is, you're not alone; only about 1.6 million people (or 0.005% of the population) in the US have it, and on top of that, it's a pretty personal disease (you'll see why in a minute; skip ahead if you don't like talk of bodily functions!).  If you want more detailed information on what it is, I'll highly recommend going here, but in a nutshell, Crohn's is a disease in which the lining of the intestine is inflamed due to an overly aggressive immune system attacking harmless bacteria.  This leads to symptoms like weight loss, loss of appetite, canker sores, and far more metal symptoms like rectal bleeding and persistent diarrhea.  All these things combined can be a lot to deal with.  When I first started having symptoms at 13, I weighed around 160lbs; within a few weeks, I was down to 120.  On top of being malnourished due to the body not working properly, I was tired ALL the time.  I had no energy to do anything, which is probably my least favorite Crohn's symptom.  Sprinting to the bathroom worrying you're going to shit your pants (and even occasionally shitting your pants) is child's play compared to the feeling that even going to see a movie with your friends is more effort than you can muster.

The good news is, there are some pretty great pharmacological options for Crohn's, and I've found a good one that's helped me get back into remission of my symptoms (and yes, because I know you're curious, Crohn's disease qualifies for medical marijuana in every state that has such a thing; in my experience, I've been much better off with the pharmaceuticals.  Which is a small bummer, but I'd much rather be healthy than get medical weed; besides, shit's gonna be legal everywhere soon anyway).  So now that I've explained a bit about what Crohn's is, and also soothed any worry you may have for me, let's jump into the crux of the matter: how did this gastrointestinal disorder come to have such a profound effect on my love of heavy music?

When you spend a lot of time in the fetal position, trying to ignore or rid yourself of the stabbing pains in your gut, music is your best entertainment option.  I've yet to find a way to read a book while curled in half, and focusing on a movie or tv show isn't great.  When I was first diagnosed with Crohn's, it was right after my 13th birthday, for which I had received the Red Hot Chili Peppers' album Californication.  I listened to that album on repeat constantly while sitting in my room in pain, so much so that when I think back on the first few months of my symptoms leading up to my diagnosis, it's hard to extricate the feelings of confusion and fear from the killer guitar lick coming out of the bridge in "Otherside."  Listening to Californication was an enjoyable escape, a way to try to think the pain away, or at least numb it for a few minutes at a time.

Six years after this, with varying degrees of success controlling Crohn's (by taking between six and 18 pills a day) I was a sophomore in college, living in a shitty garden apartment that I couldn't afford to heat, when I had probably the worst flare I've had.  It lasted for a few months, I was constantly miserable and exhausted; things just weren't great.  However, because my priorities are terrible, I did have cable, and through the television I found a new way to deal.  Every Saturday night, while my friends were out and I was at home, I watched Headbangers Ball on MTV2.  My experience with metal up to that point was cursory at best; Metallica and Killswitch Engage were pretty much the only metal bands whose albums I owned.  Headbangers Ball changed all that.  Suddenly, I was introduced to heavier, darker music that didn't just give me an escape from my symptoms, it soundtracked how I felt about them as well.  I had long before decided that my Crohn's wasn't going to define me, and that I wasn't going to let it determine how I lived my life, but there's a difference between letting a disease define you and letting the fact that you have it piss you off or even sometimes be bummed about the fact that despite your best efforts, physically you ARE limited by it. Thanks to Headbangers Ball, I found music that spoke a little more closely to those feelings of anger and isolation than the Chili Peppers did: primarily black metal, to which I was introduced via Celtic Frost's Monotheist.

I remember the first time I saw the video/heard "A Dying God Coming In Human Flesh" from Monotheist, because it started a paradigm shift in my musical tastes.  I had never heard much (any?) black metal before that, and while I enjoyed the music, what I truly wasn't prepared for were the vocals.  Nine years later this seems blatantly obvious to me, but good god, I was unprepared for just how unreal Tom G. Warrior's vocal work is!  I found Monotheist at Best Buy (which also seems crazy now) and listened to it constantly, but unlike my escapism with Californication six years prior, Monotheist served as a soundtrack to my Crohn's flare.  I was angry that I was missing out on life because of my disease, I felt alone because I (foolishly) was trying to deal with everything going on by myself and was failing miserably... the bleak, mournful sounds of Warrior's voice juxtaposed with the aggressive, black metal sounds of the music on Monotheist helped me, for the first time, to drop the "Oh, everything's fine" bullshit with myself and really, truly look at what my Crohn's disease was doing to me.  By acknowledging that yes, I was angry and scared and sad, I was able to realize that truly living up to my decision to not let Crohn's define me was going to take more than just saying the words, more than telling myself other people had it worse in life.  Dealing with the physical pain of Crohn's was old hat for me by then; acknowledging and dealing with the emotional pain was a new but necessary change, one that is at least in part due to my discovery of black metal.

Fast forward to present day.  Monotheist opened the floodgates for types of extreme metal I would never have dreamed of, everything from Dragged Into Sunlight and Wolves in the Throne Room to some of my now all-time favorite bands like Agalloch and Pelican.  As a matter of fact, it's fair to say that without that flare up during my sophomore year, I'm not writing for Brutalitopia or listening to any of the bands I love these days.  It was a huge turning point in my life, and it's moderately shameful that it's taken me so long to properly process and acknowledge that fact.  My most recent flare up is becoming a distant memory, and I'm quickly seeing my energy levels and appetite return to normal.  Between mid-November and the end of the year, I dropped almost 30 pounds, and as putting and keeping on weight has always been somewhat difficult, there's a possibility it could be 2016 before it's back.  That's a small price to pay for being back on the healthy road, one I'll pay willingly.  After a decade and a half, I've accepted the fact that I will always have Crohn's disease, but I've also finally arrived at a place where it will never define me.