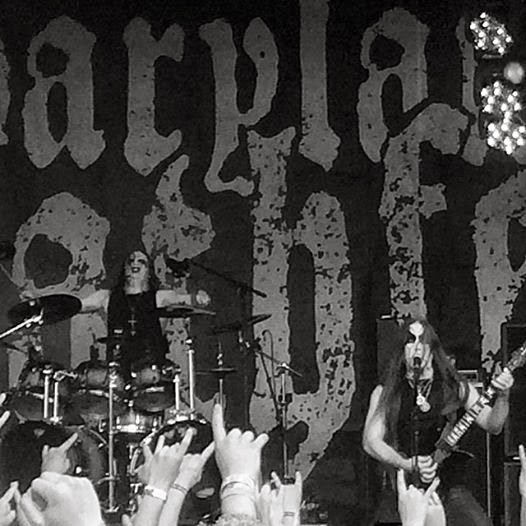 This past weekend marked my first journey to Maryland Deathfest, and I was incredibly excited.  In fact, if you ask the Durfette just how excited I was, she'll probably roll her eyes and say something along the lines of "Oh god, he's been talking about this since September!"  Which is only a slight exaggeration, because I got excited about buying tickets in October, and then once I actually got my tickets... well, let's just say MDF was a pretty constant topic of conversation around La Casa de Durfs.  So after seven long months of anticipation, was the experience of a four day metal festival everything I had made it out to be?

IT ABSOLUTELY WAS FUCKING EVERYTHING IT COULD HAVE BEEN AND MORE!  I admit, in hindsight, I wasn't excited enough for the four days of food, beer, metalheads, and of course, the BANDS.  By the horns of Dio, even thinking about everything I saw and did and ate and drank and heard and imbibed and experienced this past weekend gives me the chills and makes me miss it.  Friends of mine from home and work who didn't go have been poking fun at me for how excited I STILL am about the events of last week, but after everything that happened, it's impossible for me not to be.  The following is a by no means scientific or narrative look at the events of Maryland Deathfest XII, in no real order.


THE FOOD AND DRINK

I was beyond impressed by the sheer amount of food and drink options available at MDF.  Actually, that might not be the best way to put it.  There were roughly a half dozen food stands, ranging from barbecue (I'll be back to that) to Mexican to traditional burgers and hot dogs.  What was more impressive was the sheer number of beverage tents.  While the selection wasn't huge, I can't see anyone arguing with Yuengling, Flying Dog's Snake Dog IPA, and Miller Lite (ok, maybe someone would argue with that), the fact of the matter is, during the entire four days of the festival, the longest I waited in line for a beer or water was a minute.  That's not a typo; there were literally lines of beverage tents set up to keep the metal-goers hydrated and drunk, ensuring that the lines were always small, and everyone was able to get back to their music quickly.  Add that to the fact that 16oz drafts went for a steal at $6, and you've got yourself a winner.

Back to the barbecue.  Zombie Barbecue was the only food station I had heard of before I got to Baltimore, and it was definitely on my radar.  I assumed I would be eating something like a pulled pork sandwich, but I was definitely (well, half-) wrong.  My trip to Zombie Barbecue consisted of my ordering a Big Pig, a bratwurst covered in a pound of pulled pork, cheese, and hot peppers.  It was absolutely as delicious as it sounds, and the best part was I had leftover sauce in my beard for hours after, continually reminding me of the gloriousness of lunches past.  ZBBQ also had a DOUBLE Big Pig (properly titled the "Fat Fuck"), but I'll fully admit to being a bit leery of that one.  The guy behind the table I spoke to on Saturday did tell me they had sold six of them that day, so clearly my belief that I had the biggest stomach at MDF was mistaken.

There were a lot of bands at MDF.  Over 80, my official Maryland Deathfest Program told me, although I'm too lazy to count so it's possible I've been had.  I saw bands I had never seen before, bands I had never heard of, and bands I've loved for a long time.  And you know what the constant between all of them was?  Not a single band was anything less then great.  Not one.  Sure, some bands were better than others, and some of the earlier bands upstaged the headliners, but front to back, I've never been to a festival where literally EVERY band put on a killer performance, crushing it from their first song to their last, just absolutely destroying it and leaving everything on the stage.  From the opening band Thursday (Seven Sisters of Sleep), to the final band Sunday (Immolation), everyone brought their A game.  That said, the following five bands were my favorites from the weekend.  In no particular order:

A few(ish) other bands who were incredibly enjoyable: Inquisition, Asphyx, God Macabre, Candlemass, At the Gates, Agalloch, Incantation... you know what, fuck it; like I said, EVERY band was great. 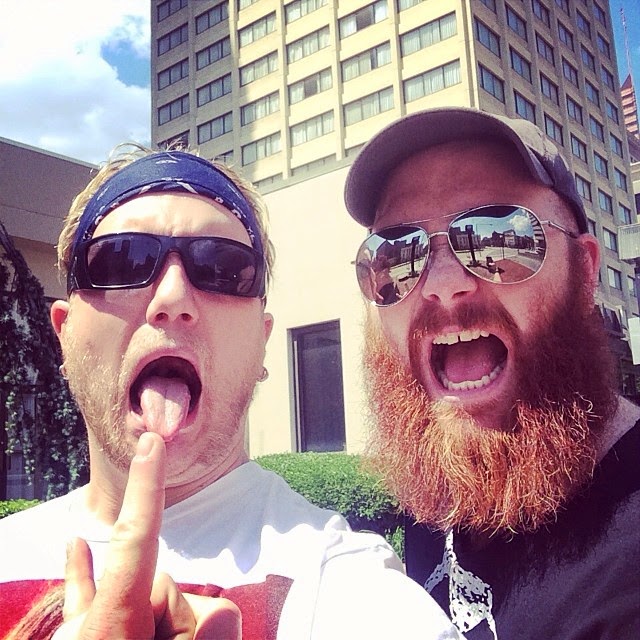 I know I said that this list was in no particular order, but I lied.  It's in order from least to most important (although everything was important and had to work together to make the festival as great as it was... you get it).  I also know what you're thinking: "Durf, if it's in least to most important order, you mixed up 'The Bands' and 'The People,' somehow screwing up a list of THREE items, you dimwitted sack of bear feces!"  I realize it may seem like that, but like a bear scratching its back against a tree, there is a method to my madness.  You see, even more than the Big Pig, even more than Uncle Acid & The Deadbeats hypnotic set, what stands out most to me and what I'll forever remember about MDF were the people I hung out with.  New friends and old, everyone was a blast to be around.

I'll start with the most obvious, and at the beginning:  I drove to Baltimore with Brutalitopia's Fearless Leader Mick, and we shared an apartment with our fellow Brutalitopians Jack and Tom.  Hanging out with these cats was an absolute blast, and while many of the memories are fuzzy (thanks in no doubt to the modern amenity that is the beer-filled refrigerator), we had a killer time laughing, headbanging, drinking, and eating our way through Maryland Deathfest.  There's nothing quite like a shared hangover, and I couldn't have picked three better guys to share it with.

Those are the old friends.  As for the new... well, there are a lot.  First off, I suppose: the NCS guys.  These folk write my favorite metal blog in the known universe, are some of my favorite writers to read and emulate and try to subtly steal style tips from... and they made myself and the rest of the Brutalitopians feel like equals, laughing and joking and sharing stories like old friends.  Islander and BadWolf, you guys are the best.  Thanks for everything.  Beyond that, Brooks and Nick hung out and watched Until the Light Takes Us at the Brutalitopad, along with rocking out anytime we ran into each other, Adrienne (sorry if that's wrong) and Jose were super cool at the Century Media Tent, Matty, Johnathan from Invisible Oranges, Pete and his daughter, Sebastian from Germany... I'm sure there are countless others my substance-addled mind is forgetting, but the point is, there were a TON of cool, amazing, fun motherfuckers at Maryland Deathfest, all there to share in their mutal love for metal.  It's incredibly cool to think that much like every band played their hearts out, everyone in attendance wore their hearts on their sleeves, eager to talk to anyone and everyone they came into contact with.  I've honestly never felt more like a part of a community while at a show or festival. 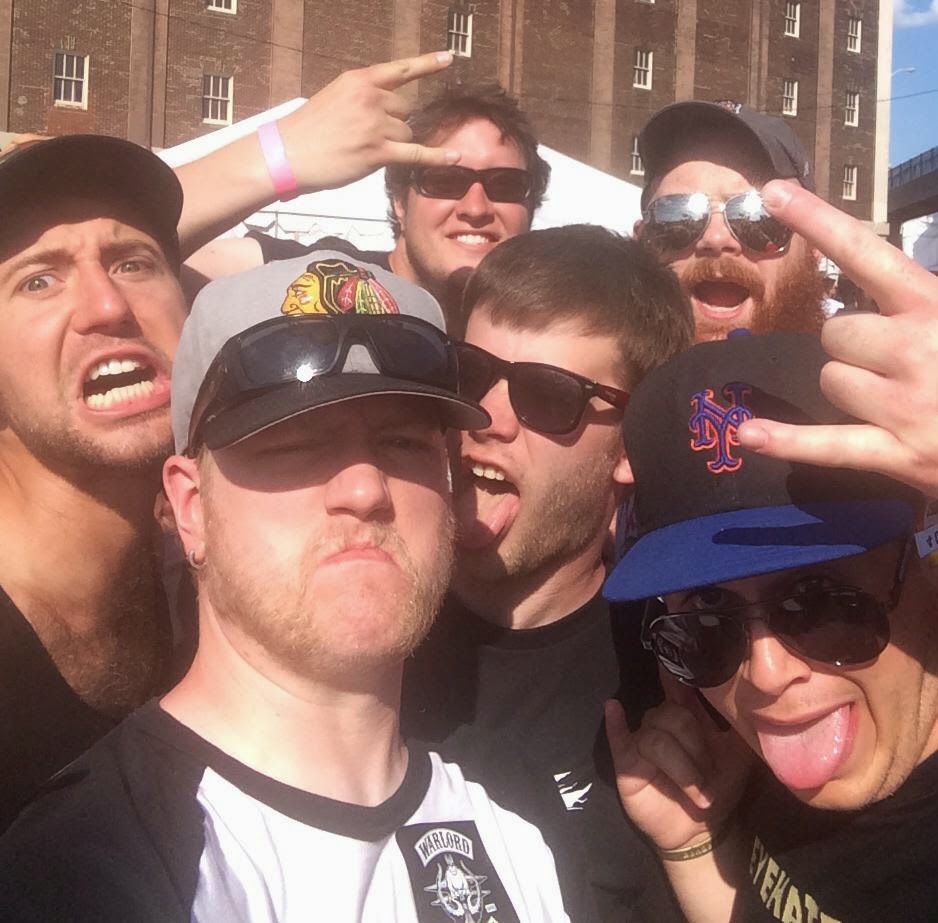 As we were driving home (or walking in downtown Baltimore; honestly my timeline is mush), I commented to Mick how MDF felt like freshman year of college condensed into a weekend: you went somewhere new, lived somewhere different, made friends with strangers, laughed over beers, bonded over music, and had random adventures and experiences you'd never dreamed you would have.  A week later, I still think that's true.  I have never been anywhere like Maryland Deathfest.  I have been to Lollapalooza and Bonnaroo, and while I'll concede that they're much larger, the level of camaraderie (not to mention organization - huge kudos to the folk behind MDF; you did a hell of a job) at those other festivals does not begin to touch what happened last weekend in Baltimore.  If you've ever considered going, do yourself a favor and do it.  I'll see you in the pit. 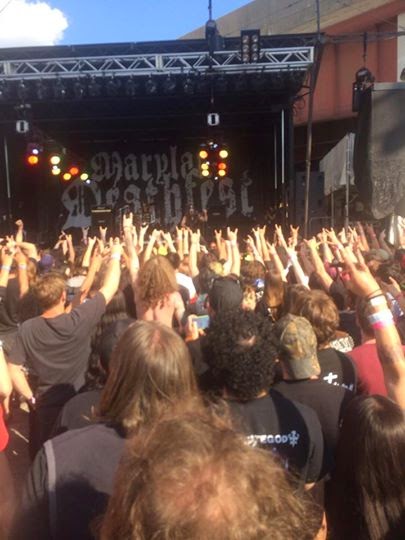