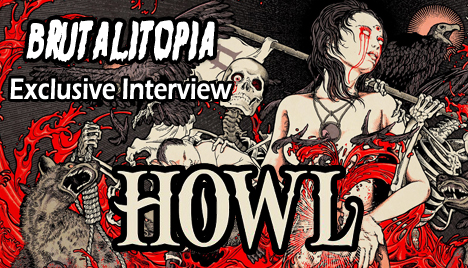 So way, way, way back three weeks ago (which, I know, may as well be prehistoric times here on the internet), I had the pleasure to sit down with the guys from Howl when they swung through Chicago.  The band was promoting their latest album Bloodlines, which I reviewed (and enjoyed) here, so I was definitely going to see how their music translated live.  The show did not disappoint, as Howl tore the Cobra Lounge to pieces, and filling the air with riffs so powerful and omnipresent that if felt like I was breathing them in.  Anyway, if you ever get the chance, see Howl; you won't be disappointed.  Before the show, I sat down with the entire band (a Brutalitopia first!) to talk about everything from their new album to touring to Taylor Swift.  Enjoy!