A Little Something On The Side: James Kelly 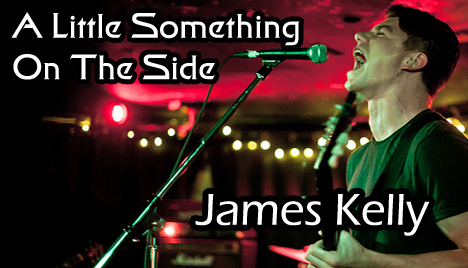 For many musicians, and artists in general, having one main project is not enough. Hell, wouldn't that defeat the purpose of even being an artist? A Little Something On The Side is a column that hopefully brings to light the side projects of musicians you may more commonly associate with another particular act. Perhaps you've heard of the side project. Perhaps you haven't. If nothing else, it's always interesting to compare and contrast works from someone under different banners. The focus of our very first A Little Something On The Side will be James Kelly.

Where You May Know Him From:
James Kelly is most commonly known as the frontman of soon to be disbanded (cue sad face) Irish black metal band Altar Of Plagues. Over the course of their career, Altar Of Plagues has made a name for themselves by taking black metal towards the ambient side of the spectrum; much like Agalloch or Wolves In The Throne Room. It's a rarity to find any Altar Of Plagues track that falls short of the seven minute mark as their song structures tend to flow more as an adventure as opposed to a song in the conventional sense of the word. As examples, I've provided tracks "Neptune Is Dead," from their 2011 album Mammal, and "God Alone," from their latest album Teethed Glory & Injury.

The Side Project You May Not Know:
While Altar Of Plagues will be defunct by the end of this year, James Kelly confirmed that he will still be working under his other project known as WIFE. This project couldn't be any further of an extreme from Altar Of Plagues. WIFE takes an experimental route as many of the rhythms are more electronic sounding, Kelly delivers nothing but clean vocals, and many spoken word passages are broken up and intermittently used. To date, WIFE has only released one EP, 2012's Stoic. Below are track from that EP, "Shards" and "Bodies."

It isn't metal by any stretch of the imagination, but I find it very interesting that the electronic beats used in WIFE seem to be in a lighter vein of what was harnessed on Teethed Glory & Injury. While I'll definitely miss the anguished and tortured yells of Altar Of Plagues, I also must admit that Kelly's clean vocals are equally as appealing to the ears in a different way. Where Altar Of Plagues created atmosphere out of eerie tension, WIFE builds atmosphere through simple electronic soundscapes and layered clean vocals to ultimately create a sense of soothing comfort.

What do you all think of WIFE?

- Mick
Posted by Brutalitopia at 8:23 AM

Email ThisBlogThis!Share to TwitterShare to FacebookShare to Pinterest
Labels: A Little Something On The Side, altar of plagues, ambient, black metal, James Kelly, Mick, side project, WIFE