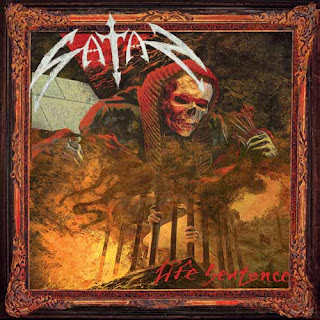 Satan, as a band of the original wave of NWOBHM, were never all that well known of a band; unless you researched that era thoroughly and managed to find yourself a copy of their 1983 classic Court In The Act. You would soon find out that this band was much less about satanism as it was about judgement of mankind and the choices made to end up in the annals of Hell. This is characterized by their use of a beskulled judge complete with old-timey wig in tow. So with the band's first album since 1987, we have arrived in 2013 with their latest entry Life Sentence.

If you love melodic guitar work on an album you simply need to pick this album up and fast because your ears will thank you for it. It is quite honestly one of the best throwbacks to classic metal I have ever heard and it may very well be the best album this group of Brits have ever recorded. With tracks like "Time To Die" and the insanely catchy "Siege Mentality," there are twists and turns that demand air guitar and ample headbanging. The drums are fresh and alive and the guitars barely take a breather as they are directly placed right in your face for mass consumption.

This album appeals to many different metal fans as the vocal style can been seen as a hybrid of King Diamond and Ghost while the guitar work touches on Iron Maiden and Judas Priest. This album may also been seen as the album fans of Angel Witch wish that As Above, So Below was last year before it arrived D.O.A. Satan are clearly an inspired band on this album and for newer bands who emulate an old sound like Enforcer and In Solitude, Life Sentence should be the new standard for this style of music in a modern age.

This rebirth for the band has come at a great time for metal music as some people are especially obsessed with the origins of particular metal styles and the lyrics on "Testimony" are particularly poignant: "These are my final words, and this is my one last testimony, I'll speak nothing but the truth this day." "Tears Of Blood" contains some more excellent dual leads and the vocals of Brian Ross permeate the great musicianship he has been surrounded by since 1979.

I love the old school style of bands like this but when an originator is still around and is able to reinvent the wheel such as Satan has done here, they should receive nothing short of universal applause. Easily a contender for the top of my 2013 list and an album that needs more and more attention. Consider my call to action on that part answered and delivered to the masses.