Some News About Some Changes 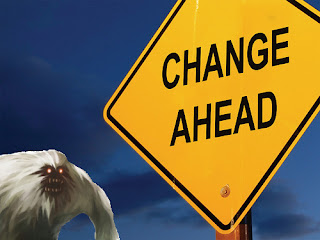 Now that we’re back and ready to get posting again, we here at Brutalitopia want to fill you in on some of the changes that we’ve made.  Obviously we’re still going to be writing about metal and don’t be alarmed, We'll Do It Live Fridays aren’t going anywhere.  We’re going to try and incorporate a bit more in the way of video and audio, but we’ll wait until some of that content is prepared and ready to post before telling you about it.  We're adapting the site to be more in line with who we are and what we believe about the music we love, and so like a yeti facing dehabitation due to global warming, we're making some changes to ensure the survival of our mythical species.  The most striking of these changes is to our music reviews.

The largest, most obvious change is that reviews have now been broken into two categories: Sounds Known and Sounds Unknown.  At the most basic level, this split is about making a distinction between albums that we’re looking forward to from bands we love and albums from bands we just sort of stumbled across on the internet somewhere.  Obviously you  approach an album differently if it’s the latest release from your favorite band than if it’s something that last.fm recommended based on your thumbed up songs, and we want to bring these differences to light in all of our writings.

One of the primary reasons for this emphasis on our experiences with the bands is that we’re doing away with the Brutalitometer and scores in general.  Instead of trying to differentiate between whether an album is an 80 or an 82, or whether Album X is better all-time than Album Y, we want to instead focus on our enjoyment and perception of the album.  In fact, think of our reviews as being more like recommendations, us trying to share music that we find and enjoy with you.  If it’s something that we’ve heard of or looked forward to, then it’s a Known Sound.  If it’s something new to us that we found somewhere, or a band’s debut album, then it’s an Unknown Sound.

Our hope is that this split, combined with our focus on sharing the music we enjoy instead of grading and attributing an arbitrary, subjective number to every album we listen to, we can foster an atmosphere where the music remains the most important thing.  We aren’t experts, we aren’t the be all, end all of opinions on things.  We’re just metal fans who want to talk about the music we love with as many people as possible.  We still encourage you to comment, and we definitely want you to send music recommendations our way.

More to come real soon, including the first Sounds Known and Unknown Reviews.